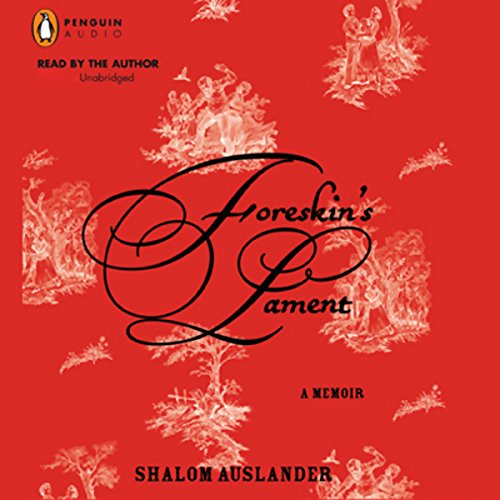 Shalom Auslander was raised with a terrified respect for God. Even as he grew up and was estranged from his community, his religion, and its traditions, he could not find his way to a life where he didn't struggle against God daily.

Foreskin's Lament reveals Auslander's youth in a strict, socially isolated Orthodox community, and recounts his rebellion and efforts to make a new life apart from it. Auslander remembers his youthful attempt to win the "blessing bee" (the Orthodox version of a spelling bee), his exile to an Orthodox-style reform school in Israel after he's caught shoplifting Union Bay jeans from the mall, and his 14-mile hike to watch the New York Rangers play in Madison Square Garden without violating the Sabbath. Throughout, Auslander struggles to understand God and His complicated, often contradictory laws. He tries to negotiate with God and His representatives: a day of sin-free living for a day of indulgence, a blessing for each profanity. But ultimately, Auslander settles for a peaceful cease-fire, a standoff with God, and accepts the very slim remaining hope that his newborn son might live free of guilt, doubt, and struggle.

Auslander's combination of unrelenting humor and anger renders a rich and fascinating portrait of a man grappling with his faith, family, and community.

“Fierce, funny, and subversively heartfelt...With his middle finger pointed at the heavens and a hand held over his heart, Auslander gives us Foreskin’s Lament. Mazel tov to him. And God? Well, he’ll survive.” (New York Times Book Review)

“A laugh-out-loud quarrel with God.” (Newsweek)

“A terrific book I was sad I read in so few sittings, because I wanted more.” (San Francisco Chronicle)

What listeners say about Foreskin's Lament

Best memoir I have listened to in my life!

I had no clue what I was getting myself into when I purchased this book, and actually put in on the back-burner because I thought it would really suck.

It turns out that this is the best autobiography that I have ever listened to (or read) in my 48 years on this planet.

The memoir is very well written, full of great humour, and anyone who was raised by one or two domineering Jewish parents will especially relate to this book.

As an added bonus, the author narrates the books, which adds much authenticity to the story. I didn't even realize until the end of the book that is was narrated by the author, and kept thinking: What a great narrator; he really understands this story.

Those who already open minded will love this book; those who aren't will hopefully learn a few things!

If my yetzer harah could write

Foreskin's Lament is the James Frey's "Million Little Pieces" for the Jewish world. It is extremely well written, and narrated. It is a serious, intense, incredibly funny and thoughtful book. The difference between the two books is largely accessibilty: a strong Jewish background is necessary to fully appreciate the references, language and context. By in large, I found it compelling. However, the author seems to cross the line of privacy, with regard to his mother, which did not add to the literary value and, I felt, was unecessarily cruel.

Used and abused by religion

This poor guy can't shake his belief system and can't live with it either, he masterfully demonstrates how parents can almost destroy their children by imposing a belief system. The amazing thing about Auslander is that he survived with his intellect intact. Parent beware of the belief you impose on your children. you could be destroying their minds.

"Foreskins's Lament" is a furious, often VERY funny memoir about growing up in a rigidly ultra-orthodox, dysfunctional Jewish family. If not for it's humor this would be an unbearably painful book; the author's suffering and his rebellious attempts to distance himself from his parents and their religion are wrenching. But, as I said, this book can be a laugh-out-loud riot and I really enjoyed it.
Note to authors: please think twice about narrating your own book. Good writers don't always make the best readers. Do your book a favor: opt for the professional.

An uproariously funny look at religion and one mans very personal relationship with god. If you don't think making fun of God (or more specifically organized religion) is funny, don't come near this book. But if you believe the man upstairs has a sense of humor this book is laugh out loud almost wet yourself in the car funny. It is side splitting fun.
The narrator is monotone and his delivery is very dry, to match the jokes- PERFECT dead pan and the laughs keep rolling in. If yu've ever had a Jewish mother or known someone else's its even better. I can't remember every laughing so hard.

When I first started listening I thought this book was strange. I agree that you would get more out of it if you had some knowledge of Jewish customs, however I'm not sure that's necessary. Burried in the humor is a story about a boy growing up to be a man who has a very complicated relationship with God. His orthodox religious upbringing has caused him to believe that every time he does something "not allowed", God will get him and/or his family. I found the book to be humourous on the surface but quite sad when you really think about it.
Personally I feel the narrator Shalom Auslander, who is also the author, has a very monotone, morose, monotonous voice. I think this is one of the few books I would have enjoyed more in print because of the narration.

The Joy of Guilt

Shalom Auslander is agonized from childhood by the countless constricting prohibitions of his orthodox Jewish upbringing--rebelling, surrendering, then apostatizing again through adolescence and beyond. The dry and ironic delivery of the author is the perfect voice for this highly authentic memoir of guilt, disobedience, defiance, doubt, and ultimate triumph.

Would it be wrong to call this a Jewish Angela's Ashes? What if I quickly point out that I think Angela's Ashes richly deserved every ounce of praise it got and that the comparison only speaks to my appreciation of both memoires?

Shalom Auslander's memories of childhood are obstensibly less forgiving than McCourt's, but the unkillable love a child has for his parents is equally moving and the ill effects of holiness equally sad. So sad, you won't stop smiling.
I think telling jokes while the Titanic sinks (and children are taught the universe is being run by a lunatic) is both useful and commendable. I liked the book so much in fact, that I'm giving it long term tenant privileges on my IPOD. (That's my highest rating.)

I don't think it upset me as much that he hated his parents and the way he was raised (being Jewish myself !) but his anger at God and the name calling was a dead giveaway at how troubled and conflicted Shalom is.

Yet...oddly - while disavowing his heritage he still chooses to keep his given name (not Anglicize it)which highly identifies him as a Jew and he still suffers from tons of "Jewish Guilt".

I hope his own son is able to get through the world in one piece !!!

Awesome. God is out to get us.. well, him at least

There are people who write as they talk (Sedaris comes to mind) and perform they're work perfectly. There are those who just get in the way. This story was perfectly read. Like military service, religion binds us together against a common enemy sometimes...and Shalom goes the distance with the humor that shows us why the bonds run so deep and produce the best humor. There are those who say all humor is from pain - only the really good stuff. It's not Portnoy's Complaint... but in all honesty, i listened to it through a crown and two fillings and actually LAUGHED during that. I'm not even making that up. A favorite listen by far.

Killed by a monotone

What a huge mistake it was to allow the author to read this book — what could have been such a subtle approach filled with humour died completely under the drone of Auslander’s voice. The worst thing is that he seemed to be doing it on purpose! The book required a reader with an understanding of comic timing. Someone able to bring out conundrums with some skill. Instead we got the most tedious monotone imaginable, which crushed the humour and the book’s potential.

I loved that the Author narrated the book. This conveyed so much emotion. Thank you