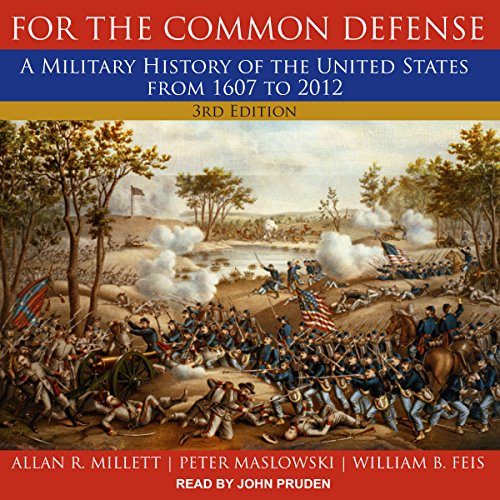 For the Common Defense, 3rd Edition

By: Allan R. Millett,Peter Maslowski,William B. Feis
Narrated by: John Pruden
Try for $0.00

This carefully researched third edition provides the most complete and current history of United States defense policy and military institutions and the conduct of America's wars. Without diminishing the value of its earlier editions, authors Allan R. Millett, Peter Maslowski, and William B. Feis provide a fresh perspective on the continuing issues that characterize national security policy.

For the Common Defense examines the nation's pluralistic military institutions in both peace and war, the tangled civil-military relations that created the country's commitment to civilian control of the military, the armed forces' increasing nationalization and professionalization, and America's growing reliance on sophisticated technologies spawned by the Industrial Revolution and the Computer and Information Ages.

This edition is also a timely reminder that vigilance is indeed the price of liberty, but that vigilance has always been - and continues to be - a costly, complex, and contentious undertaking in a world that continually tests America's willingness and ability to provide for the common defense.

What listeners say about For the Common Defense, 3rd Edition

As a military history teacher this version makes course prep so much easier. I prefer The American Way of War as a text book for students but this is what I use for lecture. this has helped me significantly. PLEASE keep producing audiobooks of common textbooks.

Comprehensive but with Distracting Pronunciation

I used this in a military history class in College. This updated version is far better in all regards.

The book provides a comprehensive and interesting exploration of the complex relationship between the government and armed forces of the United States.

For me, It's a supplemental textbook...

I'm reading this for Military History 1 for my online bachelor's program. The book covers so much, but so far, so good. I have a physical copy and so this audible version is supplemental to the printed version. I would recommend it to anyone wanting to put their loved ones to sleep on a long road trip for its' 33-hour length.

And just a few minutes into the introduction, a blatant and historically inaccurate note on our common defense, that being the 2nd Amendment.
I have requested a refund from Amazon.
As a graduate fellow in US History, this insulting interpretation will not be iterated in my presence.