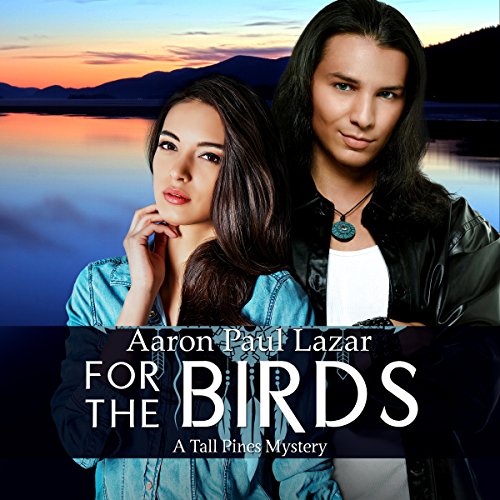 For the Birds: A Tall Pines Mystery

By: Aaron Paul Lazar
Narrated by: Hannah Seusy
Try for $0.00

What happens when a parakeet named Ruby gets an unexpected mind-meld with Marcella Hollister's quarrelsome mother, Thelma? After Thelma is kidnapped from her hospital bed, Marcella must find her - somewhere in the tall pines of the six-million-acre Adirondack Park. With the help of her Native American husband Quinn and bizarre "tips" from Ruby, Marcella butts heads with quirky bird psychic Earl Tiramisu, much to the chagrin of the FBI, who want her to stay out of the investigation.

Why is Tiramisu asking questions about Thelma's past and the money she's been spending? The FBI agents hint that it may be related to an unsolved fifty-year-old bank heist, but Marcella can't believe her annoying, but honest-to-a-fault mother, could be involved.

Across the rugged Adirondack park landscape, a brutal scenario evolves, where the good guys aren't what they seem, and only Ruby's newly acquired talents provide slim hope for survival.

What listeners say about For the Birds: A Tall Pines Mystery

A good story that has the elements of murder, good characters and was enjoyable. The narration was good, given audio for my voluntary review and my honest opinion

This is a wonderfully quirky mystery. I loved it!

This audiobook is narrated by Hannah Seusy. I love her reading voice, which is clear and concise. She gave the characters their own voices and brought them to life. I haven't listened to her before, but would consider listening to other books she has narrated.

Marcella Hollister is a wonderful, down to earth character. I really liked her. She usually only has to deal with her husband's compulsive cleaning and her mother's constant needling of her husband. When her mother is kidnapped, Marcella and Quinn find themselves tangled in a mystery. Can they save Thelma and solve the mystery in time?

I love mysteries, quirky or serious. This book definitely falls into the quirky category. I started to listen to this story and was instantly transported into it. I loved meeting Quinn, Marcella's compulsively cleaning husband. I love characters with flaws and, since cleaning is not one of my forte's, I wouldn't mind him visiting my house. I admire Marcella's patience with his fussing but, wanted to smack her for not telling her mother where to go when she critiques Quinn. Yes, Quinn is an adult and quite able to defend himself, but if my parent did that to my significant other, I'd tell them to wind their neck in.

The story takes the reader on an adventure that is full of danger and flying feathers. There are several twists and turns that surprised me too. Tall Pines is a hotel with a difference. Each room has a large aviary, so you can take your pet birds with you. Quinn's parakeet, Ruby, has been entered in the National Bird Show which is being held there. However, there is a run in with a bird psychic called Earl Tiramisu, and the FBI gets involved when Thelma is kidnapped. As the mystery surrounding the kidnapping unfolds, I found myself holding my breath at times. The accidental connection between Ruby and Thelma had me grinning, though I don't know if it was a curse or a blessing. Being an observer, I shook my head at Marcella's and Quinn's slow uptake. Nevertheless, I enjoyed watching them stumble from one problem to another as they tried to solve the mystery surrounding Marcella's stepfather's past in order to rescue Thelma. As the story reached the end (it doesn't end in a cliffhanger), I found myself grinning and I now can't wait to read/listen to the next book in the series, Essentially Yours, as soon as possible.

Aaron Paul Lazar has written a fantastic tale that captured my imagination. I love his writing style, which is fast paced and entertaining. I also love the flow. I have not read any other books by this author before, but he has now found another fan. I am now looking forward to reading more of his books in the future.

This book doesn't have any bad language, though there is some violence. Therefore, I recommend this book to older teen readers and to adults who love cozy mysteries or crime thrillers. - Lynn Worton

For The Birds is one of my favourite audiobooks.
It has a great story with a number of twists and red herrings to the mystery. This is coupled with some of the most entertaining characters in a majestic setting.
I never expected my favourite character to be a bird named Ruby but she is delightfully sassy.
This quirky mystery with a senses of humour should be on everyone's TBR list. I can't wait to read the whole series.

If you could sum up For the Birds: A Tall Pines Mystery in three words, what would they be?

What was one of the most memorable moments of For the Birds: A Tall Pines Mystery?

I really liked the surprise reveal about one of the main characters (no spoiling here!) and thought the ending was a fitting, satisfying one.

Which character – as performed by Hannah Seusy – was your favorite?

It's hard for me to say--no character stood out for me although I would have to say I enjoyed Ruby the most. Actually, the character I most enjoyed was the posthumous character of MArcella's dad.

You know, I was surprised at hpow much I enjoyed this book. It had a slow start but ramped into a sweeet and engaging story.

I'm a fan of Aaron Paul Lazar's Gus Legarde series. This is the first of his other books I've read. Right from the opening pages, I really appreciated the quality of his writing--narration and dialogue were spot on. Lazar gives this story the rich setting details he's famous for (well, if he isn't yet, he should be!) plus an even more engaging lead than Gus Legarde (and that's saying a lot). Marcella Hollister and her supporting cast of zanies offer loads of raw material for the series.
As for plot, Lazar delivers a kooky sequence of events with a well-developed showdown with the villains. Then the story slowed down. I was thinking with furrowed brow, Hmmm... this is a bit of an anticlimactic tail-off ... Then Lazar sucker-punched me with a twist you'd have to be really psychic to see coming, and then a final zinger to wrap things up.
This is a fun light read (listen, in my case), but it contains occasional glimpses of very poignant subtext--another signature feature of Lazar's novels that make him one of my favorite up-and-coming authors.
This is also the first time I've heard Hannah Seusy's narration. To be honest, my first reaction was that her diction lacked clarity. But within a few minutes I got into the swing of her voice and ended up being completely won over by her outstandingly natural characterization of not only Marcella but also the other characters.
Two thumbs up, all around.

I thoroughly enjoyed this audiobook! It has plot twists and quirks. The characters have depth and are well developed, for example, the mother/mother-in-law who gets on everyone's nerves but still manages to be lovable. The couple who are two of the main characters seem so real and likeable. This audiobook is unique and original, such as the bird themed luxury hotel. I appreciated how several mysteries are woven into the story.

Romance and Mystery Lead to Terror

I am one of Aaron Paul Lazar's happiest fans. I have listened to almost every book he has written. This is my first in the Tall Pines series. I so enjoyed the entire story. When I listen to one of Aaron's books I feel as if I am part of the actual story. The characters in every book are so real and &quot;down to earth&quot; for the most part but I have to say some of them manage to experience life in a way that is unusual. That's what makes such a good story though...experiencing life vicariously through these exciting and romantic characters. I was given this book by Aaron in exchange for a review. This book did not fail to satisfy my interest in his stories. I had no idea how this story was going to end. A young couple and her Mom and a talking bird traveling in a van to a bird show ! Twists and turns take the listener to places one would never expect. Don't miss this one !! Thanks Aaron !

what a fantastic and funny, in places, audiobook from the extremely talented Mr Aaron Paul Lazar and brilliantly narrated by Hannah Seuss. I'd love to hear more xxxxxx