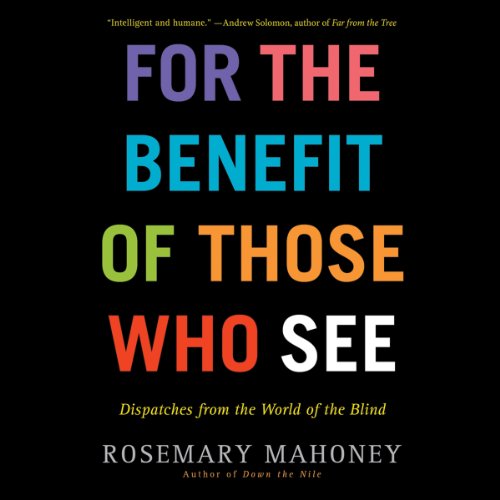 For the Benefit of Those Who See

p>In the tradition of Oliver Sacks's The Island of the Colorblind, Rosemary Mahoney tells the story of Braille Without Borders, the first school for the blind in Tibet, and of Sabriye Tenberken, the remarkable blind woman who founded the school. Fascinated and impressed by what she learned from the blind children of Tibet, Mahoney was moved to investigate further the cultural history of blindness. As part of her research, she spent three months teaching at Tenberken's international training center for blind adults in Kerala, India, an experience that reveals both the shocking oppression endured by the world's blind, as well as their great resilience, integrity, ingenuity, and strength. By living among the blind, Rosemary Mahoney enables us to see them in fascinating close up, revealing their particular "quality of ease that seems to broadcast a fundamental connection to the world." Having read For the Benefit of Those Who See, you will never see the world in quite the same way again.
©2014 Little, Brown and Company (P)2014 Hachette Audio
Cultural & Regional Education & Learning History & Commentary Health & Wellness People with Disabilities Travel Writing & Commentary
Show more Show less

"In this intelligent and humane book, Rosemary Mahoney writes of people who are blind....She reports on their courage and gives voice, time and again, to their miraculous dignity." (Andrew Solomon, author of Far From the Tree)
"Mahoney's husky, lean delivery packs a professional wallop.... [her] attention to detail, her honest (and sometimes abrasive) observations, and her excellent narration make this a great listen." ( AudioFile)

What listeners say about For the Benefit of Those Who See

A Dispatch from a Person who is Blind

I found this book disappointing on many levels. First, the author’s perceptions of blindness were dramatic, histrionic and bordered on the ridiculous. Her insistence that living as a person who is blind would be a fate worse than death was often repeated during the first half of the book. The author’s frequent descriptions of the eyes of the blind people she met in developing countries and her numerous depictions of their blindisms were distressing and insulting. The author relied heavily on quotes from, mostly, historical sources and I felt as though her writing reflected many of these antiquated beliefs and perceptions. Perhaps, the author accurately described mannerisms, behavior patterns and visual appearance for people who are blind in developing countries, but very little of what she described has been my experience as a person who is blind in the U.S. I believe it was the author’s intent to paint a portrait of strong and determined people who, despite their blindness, have overcome great adversity, but at the end of the book, I still felt as though the author was marveling at how accomplished blind people could be as if they were freaks in a zoo—completely set apart from the sighted world. I have never in my life felt up people I don’t know and the idea of touching a person’s face is beyond repulsive to me. I don’t hold hands with my friends or constantly feel the need to touch people and objects in my environment. For all my life, I have worked to eradicate antiquated and romanticized stereotypes about people who are blind and this book highlighted the stereotypes I find most offensive. If this author’s perceptions of blindness are held by more than an ignorant and fearful minority, there is far more education that needs to be done. I am a self-confident and independent woman who lives a happy, healthy and active life. I have a master’s degree and have a job that I love and do quite well. My blindness has always been just another aspect of who I am—like having blonde hair, a petite stature, having a snarky sense of humor and being a voracious reader. Blindness has never defined me and I don’t spend much time dwelling on it as I live my life. I believe that the book was supposed to leave me feeling optimistic and amazed by the resiliency of blind people. Instead, I am left with a painful, hollow ache deep in my soul and the hope that the countless people I encounter do not view me in the same way the author views people who are blind. If you are interested in learning what it is like to be blind in the 21st century instead of in the 18th century and earlier, I would recommend you give this book a pass and buy something that is more relevant to 2014.

great book that provided a lot of insight and encouraged reflection. You know a good book when your actions are changed by it and I believe that mine will be from this book.

Great book! I thoroughly enjoyed learning so much about the blind. I, too, held my own preconceived notions and beliefs regarding the blind. A few years ago, I witnessed a blind lady at my gym doing box jumps and other exercises, so that was the beginning of a new world view for me, and this book brought it so much further. The students' lives illustrated here was fantastic.

Regardless of your visual acuity, this book is amazing. The author poignantly explores what it means to be visually impaired and how false perceptions cloud what the sighted think of the blind and vice versa. Blindness is NOT worse than death, only provides a different experience of the world.

An excellent peek into blind culture

This is an excellent look into blind culture from a sighted person for sighted people. I loved reading about the two schools and also learning how blind people are treated around the world and how they overcome discrimination against them.

A great read, if kind of boring in parts

Parts of this book were excellent, parts a little dry. I learned a lot about blindness, and how blind people operate, and was entranced by several parts where life at a blind school, led by blind administrators, was described in detail.

The scene where the power goes out at the school, and she contrasts her experience with the blind students and administrators (who didn't even know the power had gone out, and were going about their normal routines) brought me to tears, and I will not soon forget it.

Ms. Mahoney delivers an excellent performance reading her own book.

I might have given it 5 stars, if it weren't for some fairly long stretches where she just seemed to go into far too much detail. At one point a walk down the street goes on for half an hour or so as she describes every pot hole, every insect and virtually every blade of grass. This kind of thing happens several times and I was sorely tempted to fast-forward a few times.

I think I understand what she was trying to do in those parts, but at times I felt she was just going a bit too far with the detail.