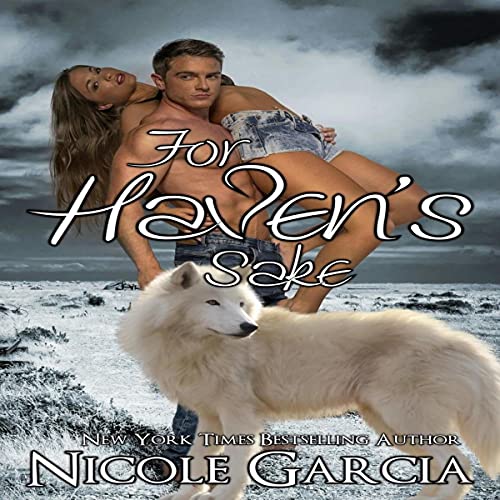 In Jax's pack, there is only one rule to follow: Obey the alpha. You either comply or suffer the consequences. No wolf would ever dare cross Jax's father, but Jax isn't like the others in the pack. He doesn't care if he is the only heir to his family's legacy. Nor does he want the responsibility of leading the very pack that has alienated him all these years.

Jax flees the only home he has ever known when his father's demands become too much. He plans to start a whole new life when he happens upon a wolf sanctuary called For Haven's Sake. For once, he finally feels like he belongs, and the owner, Haven, is just the woman he's been searching for.

Jax and Haven begin to fall for each other, but will Jax's past come crashing in on them?

What listeners say about For Haven's Sake

Nichole Garcia has written another exciting, sexy story. Jax's father wanted him to marry another, but Jax wanted none of it! Jax didn't want to be alpha of his pack, he only wanted to be happy, so he left the pack .All his father wanted was power and control. A snowstorm was ready to hit at Haven's wolf sanctuary. An old woman named Martha, told Haven about an injured wolf on her property. When she went to check on the wolf, things got heated and tangled up.
Gunner and Jenna are wonderful narrators. They have a connection that is hard to surpass. Their voices drag you right into the characters.

This is a quick, steamy, fun listen, one you surely do not want to miss. Nicole Garcia presents your ears with For Haven's Sake, a shifter romance! Jax is a shifter and expected to marry a woman in his pack. Not willing to settle, he leaves and finds work in an animal sanctuary run by Haven. And our romance begins. Nicole Garcia always creates a story that warms my heart. This one is no exception. Jax is more than a shifter. He is a man who is strong and protective, knows what he wants and won't settle for less. Haven is perfect for him, but will her love be strong enough to bear his secret? It's passion, suspense and a feel good story.

Narrated by the talented team of Gunnar Qualen and Jenna St Claire, the story comes to life. These two have amazing chemistry which comes down through to their performance. Qualen has the perfect voice for Jax, very deep and protective while St Claire keeps Haven, smart and spunky! I love them and always enjoy their narrations.