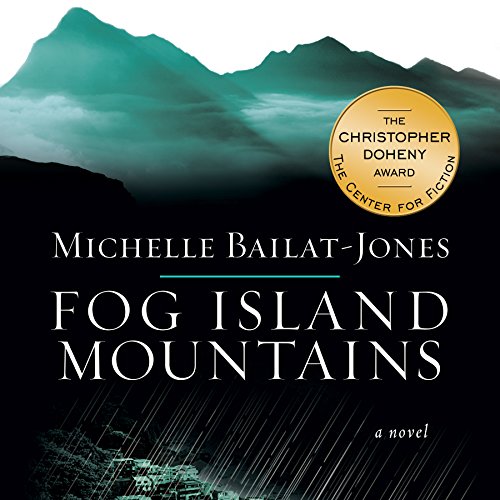 A Novel
By: Michelle Bailat-Jones
Narrated by: Jennifer Ikeda
Length: 6 hrs and 2 mins
Categories: Fiction, Contemporary
3.5 out of 5 stars 3.4 (220 ratings)

Huddled beneath the volcanoes of the Kirishima mountain range in southern Japan - also called the Fog Island Mountains - the inhabitants of small town Komachi are waiting for the biggest of the summer’s typhoons. South African expatriate Alec Chester has lived in Komachi for nearly 40 years. Alec considers himself an ordinary man, with common troubles and mundane achievements - until his doctor gives him a terminal cancer diagnosis and his wife, Kanae, disappears into the gathering storm. Kanae flees from the terrifying reality of Alec’s diagnosis, even going so far as to tell a childhood friend that she is already a widow. Her willful avoidance of the truth leads her to commit a grave infidelity, and only when Alec is suspected of checking himself out of the hospital to commit a quiet suicide, does Kanae come home to face what it will mean to lose her husband.

Narrated by one of the town's oldest and most peculiar inhabitants, this haunting and beautiful audio reinterpretation of the Japanese kitsune folktale tradition (also available in print, eBook, and unabridged audio CD) is about the dangers of actions taken in grief, and an exploration of storytelling as a form of healing.

"Jennifer Ikeda's quiet, nearly hushed tones add weight to this intimate telling, set in a small Japanese town as a summer typhoon bears down on it. With the cadence of a storyteller or a poet, Ikeda relates the drama of Alec, who's just been given a terminal cancer diagnosis. As Alec, his wife Kanae, their family, and the townspeople, their lives all interconnected, react, the storm rages. Ikeda shifts beautifully between Alec's South African-accented English and other characters' Japanese or Japanese-accented English. As events reach a crescendo, Ikeda's narration reflects the growing urgency. The emotional story, with hints of magic and folklore, will give listeners much to ponder." (AudioFile)
"With a voice as gentle and beguiling as a whisper, actress Jennifer Ikeda unspools the story of Kanae and Alec Chester as a typhoon bears down on their town of Komachi, Japan…It's difficult to imagine a voice better suited to this debut novel by Michelle Bailat-Jones than Ikeda's." (Chicago Tribune)
The novel, which won the 2013 Christopher Doheny Award from the Center for Fiction, is self-contained and energetic, as whimsical as it is sad, as playful as it is serious…Bailat-Jones maintains the present indicative tense throughout the novel, an impressive achievement on its own, which also serves to strengthen the reader’s sense of Azami as the omnipotent storyteller…Fog Island Mountains’ thesis is a brave one: vows, once spoken, can transcend the need for speech. But their power is dreadful—they compel us to return and return again to the sites of our deepest weakness. (Pank)

I am so glad to have listened to this book rather than to have read it. The prose deserved to be heard as much as poetry does. And the narrator struck just the right note for the storyteller's voice. Listen to this book with patience and concentration to fully appreciate the lyrical nature of the story.

This is an unusual love story about coping with life's most difficult challenges, a perspective we don't often see in fiction. It is handled with exceptional insight and grace here.

I also love how the landscape and the weather become powerful characters in this book.

Chris Doheny – one of my closest friends and favorite colleagues – passed away in 2013 due to complications from cystic fibrosis. We spent a lot of our time together talking about books, so I was honored to be a judge – along with Audible’s publisher and the authors Ann Hood and Dani Shapiro – for the first literary prize awarded in his name. With its atmospheric storytelling and haunting look at the realities (and different reactions) a terminal illness brings, Fog Island Mountains was our unanimous choice for the prize. I have no doubt that Chris – who counted Haruki Murakami, Kurt Vonnegut, and David Mitchell among his favorite authors – would be proud of this selection.

I loved this book for its honesty. the characters are all flawed and all perfect. there is betrayal and forgiveness. the storms of life rage as does the typhoon but it passes and there is peace.

I listened to it three times in two days. Wonderfully creative, culturally insightful, beautifully written, and superbly narrated. well worth it.

I can see why the author won accolades with this book! I was quickly drawn into the intrigue as a loving wife fails to show up for her husband's major medical consultation. As she runs away from her greatest fear the reader is in the car struggling with her, learning of her profound love, as the islanders are gearing up for a major typhoon. The storyteller slips up and down the stormy mountainous terrain, in and out of the hearts of the Japanese woman, the South African teacher she married and treasured, and the grown children, all of whom handle their family stressors differently. The reader did an amazing job of maintaining the continual buildup and the climax did not disappoint.

The story for me was just okay....luckily the book was only six hours or I probably would have abandoned ship.

Who would you have cast as narrator instead of Jennifer Ikeda?

I really liked Jennifer Ikeda in the Discovery of Witches series, but in this one, all the characters sounded almost the same. She also talked really soft and slow....I about went to sleep while driving.

This was a boring story. I kept waiting for a plot and some connection to the characters, it was a waste of my time.

Sincere overkill of wafting floral verbosity with a dash of tedious content makes for a very dull listening experience if plot is what you're after.
I gave this book fair listening effort but unfortunately had to shut it down after spending ten minutes of my life listening to a woman's simple trip to fetch water in a pail.
Possibly the novel is trying too hard to be "Japanese-ie" and affording too much tedium as an homage to traditional Japanese poetry or trafitional use of negative space in the cultural artwork.

Nothing to grab onto

I can't understand what the author thought would grab my attention and hold it. Everything in the story is "pending." Yes, I understand the symbolism of the gathering storm, but this one is gathering at a somnolent pace. I don't have the patience for it. I am only about 2 hours in (although that is about 1/3 of the way through) and I am annoyed with every character and baffled by anyone's motives.

This is compounded by the breathless monotone that is the narration (although I'll give her full marks for her accents.)

Unfortunately, Kanae's behavior is simply inexplicable (why is she behaving like that?) and so predictable (she is going to cheat on her dying husband, isn't she?) that I can't stand to listen to the absolutely endless buildup to whatever critical denouement is heading our way.

I'm stopping this one and giving the book back to Audible.