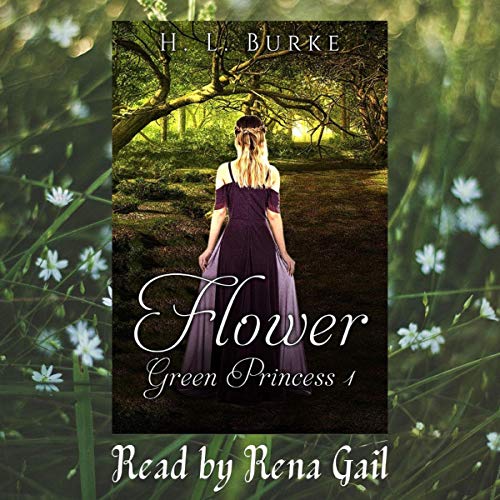 Audiobook one in the Green Princess Trilogy.

Kitrin always assumed her overprotective parents were just paranoid - until the trees started talking to her.

For 16 years, Kitrin has longed for freedom from her parents' secluded manor. However, one day, her emotions trigger flowers to bloom, roots to grasp, and trees to bend. Unable to control her unexplained abilities, she finds an anchor in a young man with sad eyes and his own secrets. A man who sends sparks through her but who might be tied to her destruction.

Palace outcast and nephew of the king, Prince Bryce lives under the shadow of his father's execution for treason. To escape the toxic court, he takes comfort in the company of the kindhearted Kitrin. However, as the mysteries in both their pasts are revealed, he realizes the girl he loves is someone his family wants dead.

What listeners say about Flower

another enthralling story by H. L.

I love the characters and plot. It kept me listening to the end. Must read book 2 and 3 now.

I Love This Story!!

H.L. Burke is a fantastic writer. The characters, dialogue, plot , suspense and ending were excellent. The narrator did a great job at voicing the different characters and conveying tension, surprise, etc. I highly recommend it.

Wow! This book is amazing!

I absolutely love this paranormal romance! The author did an amazing job drawing me in and I truly could not put it down! I think I have found a new author that has just jumped to my favorite's list. This book is very well written and so much better than I ever expected. It is rare to find an author that can keep you so enthralled that you feel like you are part of the story and you are able to connect with the main characters and feel a ray of emotions. I was so captivated I was not ready to see this book come to a conclusion. This is a trilogy, so even though I was expecting a bit of a cliffhanger I was ok with how things wrap up and I'm dying to see what happens next!

The narration was excellent and brought the story to life.

I love how the characters were developed and the twists and turns I did not see coming. This story has Adventure, loyalty, romance, magic, secrets, betrayal, courage, love, tragedy, and sacrifice. It has everything I want in a book and more.

I'm so looking forward to book #2!

this book was given to me at my request for review

This is not your disney version of a princess as I first thought when I saw the cover and read the blurb. The characters are more human and there is no good or bad character. They have different shades in their personality. What something might seem OK to someone might mean a bad thing for another. It all depends on perspective.
The one thing that kept me reading is the characters. I liked the fact the love interest believed in each other and when something went wrong they still had trust in the other.
I would recommend you have a pack of tissues ready, a character die's that I was not expecting.
There is no profanity or sexual content (it is discussed a little and the sex scene happens behind closed doors) with some mild violence.

Enough intrigue to keep you listening for the Conclusion.
Set in a historical story style which is very enjoyable.
The narrator gives good tonal impressions for the characters to draw the listener in to the character's emotions, thoughts, and actions.

I think I’m definitely not the right audience for Ms Burke’s teen romance books. I’ll refrain from asking for codes in the future.

Two outcast kids find one another and make less sense together than apart.

Again with the let’s keep the secret from the kid although it will help her/him understand the rules. I really hope writers like this never have kids ...

The world and magic building were weak and unexplained; okay, somewhat explained during the ball but - not satisfying. The angsty romance was abundant- almost over the top.

I did like Bryce at the beginning; until the ball. Kitrin never mounted more than a over reacting B-rated actress. Definitely not heroic nor strong.

I really hoped this series would draw me in :(

This is my voluntary review of an audiobook received for free.

ANOTHER WONDERFUL ADVENTURE BY H.L BURKE! RENA GAIL BRINGS THIS SERIES TO LIFE WITH THIS NARRATION! A STORY ABOUT A YOUNG WOMAN WHO HAS A SECRET THAT IS HIDDEN AND WILL COST EVERYTHING TO KEEP TO SURVIVE, THIS IS A HEART RENDERING SERIES THAT WILL KEEP YOU LISTENING THROUGH TILL THE END!