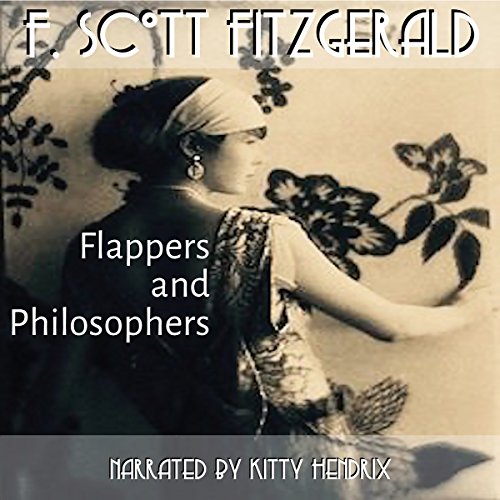 By: F. Scott Fitzgerald
Narrated by: Kitty Hendrix
Try for $0.00

F. Scott Fitzgerald is widely regarded as one of the greatest American writers of the 20th century. He wrote this collection of eight short stories in 1920 for magazines such as Colliers and The Saturday Evening Post. This collection includes: "The Offshore Pirate", "Dalyrimple Goes Wrong", "Head and Shoulders", "Benediction", "Bernice Bobs Her Hair", "The Cut Glass Bowl", "The Four Fists", and "The Ice Palace".
Public Domain (P)2016 Kitty Hendrix
Anthologies Classics Social Sciences
Show more Show less

What listeners say about Flappers and Philosophers

Perfect Reading of a Classic!

I thought, between high school and college I had read every F. Scott Fitzgerald book there was, I was wrong and I’m so glad I listened to this collection of short stories now, allowing me to view his writings from the perspective of an older and wiser person.

These short stories were written in 1920 when F. Scott Fitzgerald was a young man of 24-years-old and his writing reflects that sense of wonder, romance and pseudo angst that most young people have before the brutality of everyday life beats it out of you by the age of thirty-five, but what remains timeless, unlike youth, is the beauty of his words, his way with prose is still a marvel to this very day.

Some, I’m sure will find offense and or discomfort with the archaic and offensive use of racial terms, that at the time this book was written, was completely acceptable and commonplace, but it would be wrong to censor this work and history should not be rewritten, but rather learned from.

The narration was performed admirably by Kitty Hendrix, she really captured the feeling and tone of the time that this book was written in and I was completely engaged with her reading through the entire audiobook. The production quality of this audiobook is top of the line as well.

Young scholars take note if this book is required reading you will be doing yourself a great favor by downloading this version and guaranteeing an “A” in class.

A collection of short stories.

What did you love best about Flappers and Philosophers?

It was a nice change to listen to a collection of short stories vs a complete book.
F. Scott Fitzgerald. What can you say? Always a joy.

The narration was good, easy to follow, I would listen to her again.

Both. The stories make one laugh and also cry.

I was voluntarily provided this review copy audiobook at no charge by the author, publisher and/or narrator for an unbiased review.

I really enjoyed this collection, and found the stories to be very relatable despite their age. The best part, though, is how vividly each story captures the jazz era. Kitty Hendrix' performance is fantastic too, she really brings each story and character to life, to the point that I can't imagine reading the physical book. I highly recommend Flappers and Philosophers for fans of F. Scott Fitzgerald. It's a real treat!

I simply loved listening to F. Scott Fitzgerald's Flappers and Philosophers, an anthology of eight short stories first published in magazines like The Saturday Evening Post in 1920. These stories were not only a pleasure to listen to, they also gave me a glimpse into the 1910s-1920s with irony and wit. In this collection we meet the "Lost Generation" (headstrong young women and wandering young men of means).

There are several must-reads in this collection that are classic Fitzgerald, including "Head and Shoulders" and "The Ice Palace". My favorite two stories were “The Offshore Pirate" about the spoiled heiress who falls for her kidnapper, and "Bernice Bobs Her Hair” about competing debutantes where one tricks the other to cut her hair. What I enjoy most about anthologies is that the stories are the perfect length to listen to an entire one during my daily commute to work.

I listened to the Audible version of this audiobook narrated by Kitty Hendrix who did a wonderful job. I received a copy of this audiobook in exchange for an unbiased review. In conclusion Flappers and Philosophers is an excellent audiobook that any fan of the jazz age would enjoy!

Would you consider the audio edition of Flappers and Philosophers to be better than the print version?

This audiobook has been my introductory experience with F. Scott Fitzgerald. I was keen to engage as deeply as I could with the stories and characters from these short stories. Kitty Hendrix's performance left me with strong impressions of the characters in these works and has left me with a wish to become a reader of other Fitzgerald classics. I am from Australia, in my 30s, not widely read in American classics. This collection, with Hendrix's narration, has been the best way I can think of to have dived in to the classic literature from the jazz age.

What was one of the most memorable moments of Flappers and Philosophers?

The turning point when Evylyn learns that her daughter has taken ill, in 'The Cut-Glass Bowl'. I remember Hendrix's performance conveying powerfully to me the feeling of powerlessness as Mrs. Piper loses control over the direction of conversation downstairs, only to be called up to find that her daughter needs her full attention and even then there is little she can do...

'Shut up!' Ardita, as performed by Kitty Hendrix, is a riot. Ardita's first utterance, and the first line of dialogue in the book, delivered with such affectation, dropped me gleefully into the deep end of literary tropes involving flappers, bobbed hair and 'cutting in'. Thanks Kitty Hendrix, your Ardita was a blast.

If you could take any character from Flappers and Philosophers out to dinner, who would it be and why?

Bernice. I found myself caring for Bernice a great deal, feeling as though I was in there rooting for her as her conversation began, unexpectedly, to interest the young men at the dance parties. I felt an ominous worry about her fortunes the whole time. Really, Bernice could benefit from a debrief over dinner.

I had very high expectations for this book, and was not disappointed.

This is a wonderful collection of eight of F Scott Fitzgerald's shorter stories. Each story was narrated expertly and was an absolute joy to listen to. I can not imagine anyone not enjoying this collection. I was gifted this book at no cost for an honest review.

Would you listen to Flappers and Philosophers again? Why?

Yes,I would listen to this audiobook again.It is read and written very good.

I liked the narrowing,it matches with the plot.

This book makes you laugh and cry.

I agree: Perfect Reading of a Classic

I seem to be the first person to review this who wasn't given a free copy to review - but I must say I endorse all the points made by the previous reviewer. This is an exquisite introduction to the young Scott Fitzgerald.

I listened to the samples of several versions before selecting this one, and was really happy with the choice I made. Kitty Hendrix was the perfect narrator - she had the touch of a jazz age young thing, and really brought the stories to life.