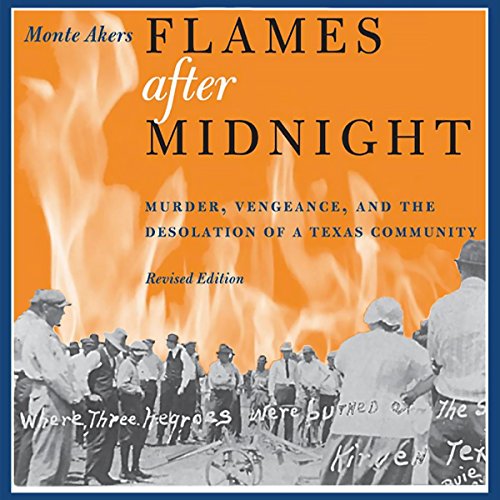 By: Monte Akers
Narrated by: Todd Waites
Try for $0.00

What happened in Kirven, Texas, in May 1922, has been forgotten by the outside world. It was a coworker's whispered words, "Kirven is where they burned the [Negroes]", that set Monte Akers to work at discovering the true story behind a young white woman's brutal murder and the burning alive of three black men who were almost certainly innocent of it. This was followed by a month-long reign of terror as white men killed blacks while local authorities concealed the real identity of the white probable murderers and allowed them to go free.

Writing nonfiction with the skill of a novelist, Akers paints a vivid portrait of a community desolated by race hatred and its own refusal to face hard truths. He sets this tragedy within the story of a region prospering from an oil boom but plagued by lawlessness, and traces the lynching's repercussions down the decades to the present day. In the new epilogue, Akers adds details that have come to light as a result of the book's publication, including an eyewitness account of the burnings from an elderly man who claimed to have castrated two of the men before they were lynched.

What listeners say about Flames after Midnight

This story, though compelling, complicated and full of intrigue, twists and turns, actually blames the men who were burned alive, and barely glosses over who the real murderers were!