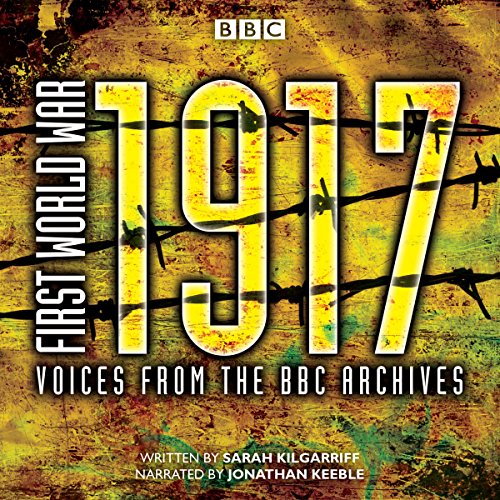 Voices from the BBC Archive
By: Sarah Kilgarriff
Narrated by: Jonathan Keeble
Length: 2 hrs and 8 mins
Categories: History, World
5 out of 5 stars 5.0 (2 ratings)

From the Russian Revolution to America's declaration of war and the lasting horror of Passchendaele, this unique collection of historic recordings contains the voices of those who were there. Among the memorable voices in this compilation are Commander William Ibbett, who experienced the aftermath of the Bolshevik Revolution at close quarters; Sir Edward Spears on the mutiny in the French army; and Royal Flying Corps pilots, whose life expectancy could be a low as a single day.

The year 1917 was a year of decisive events. Germany raised the stakes at sea; America eventually declared war; the Nivelle offensive almost destroyed the French army; and, following two revolutions in February and October, Russian forces collapsed. For the Allies, despite their successes at Messines and Cambrai, the year was overshadowed by the losses at Passchendaele. Survivors recall their despair as men and horses drowned in mud: 'a viscous, tenacious mud which smelt of death'.

In the Middle East, British fortunes changed with the capture of Aqaba and Jerusalem. General Allenby, Commander of the Palestine Campaign, recalls the vital if unorthodox feats of one officer in particular: Colonel TE Lawrence. By December troops on the Western Front were digging in for yet another winter. Victory now depended on the arrival of the Americans.

An enjoyable account told by the people who were there. Would recommend to history lovers.