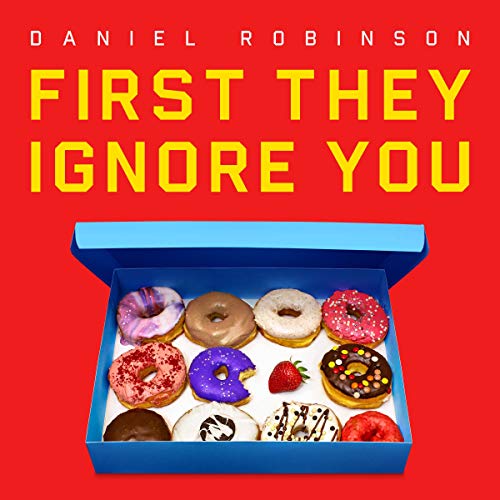 First They Ignore You

By: Daniel Robinson
Narrated by: Dane Petersen
Try for $0.00

Russell Horvath seems to have it all, a beautiful supportive girlfriend committed to helping him shed those pesky extra pounds, a screenwriting career poised to take off spearheaded by his best friend and agent, except for the fact that his girlfriend's advice is sounding more and more like a never ending onslaught of criticisms and passive aggressive cut-downs and his agent is less a friend and more a frenemy...if that's even a real word...whose rampant alcoholism and womanizing is becoming harder and harder to justify so it's really no wonder that Russell himself has been hiding a problem. A secret. An addiction.

Only it's not so bad right? Because it's not like he's using heroin, cocaine, or "real drugs", he's just eating...a lot...of fast food, late at night, when nobody else is watching, taking increasingly extreme measures to hide his binges from everyone - except there's only so much mouthwash he can gargle to mask the scent of the 5,000 fatty, fried calories he consumed the night before as his girlfriend stares at him with a silent fury brewing behind her placid emerald eyes wondering why in the world the size 46 jeans she just bought him, don't fit anymore?

And that's all before the dog gets involved.

"Robinson's knack for portraying the underbelly of Los Angeles with sensitivity, specificity, and great humor makes FTIY feel simultaneously all too familiar and utterly novel.” (Jess Brownell writer on ABC’s Scandal and the upcoming Bridgerton series for Netflix)

What listeners say about First They Ignore You