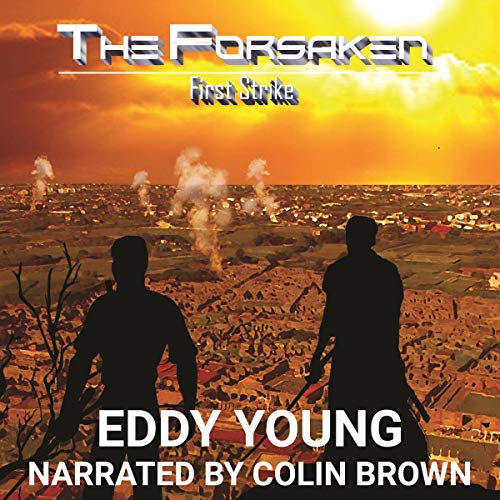 Do you like The Hunger Games or The Maze Runner but want a cast of characters in their late teens or early twenties? Does the fantasy and science fiction genre intrigue you? Are you a fan of RPG stories and adventures? The Forsaken is perfect for you!

Twenty-one-year-old Luke Edwards is struggling to cope with the death of his parents and the loss of his best friend. Shortly after losing those close to him, he chooses to take matters in his own hands to help those in need. Several months after living in the slums of a city ravaged by poverty and food rations running low, Luke stumbles upon a stranger who rekindles his desire to continue his promise to avenge those he loved. With a renewed purpose, a world revolution is ignited in the hearts of millions versus the wicked faction known as the Children of Iscar.

What listeners say about First Strike

First Strike is book number one in The Forsaken series of fantasy novels suited for young adults by talented author Eddy Young. The story follows twenty-one-year-old Luke Edwards as he tries to cope with the loss of his family and his best friend in the world ravaged by war and poverty. But, hope is a powerful thing and he will find a way to do something in order to get a better life and also to fight for a righteous cause.

The writing is good, the action is fast-paced, the world is interesting and the characters that we meet in it are well drawn out and well developed.

The narration delivered by Colin Brown is balanced and suitable for this kind of novel. He reads in a calm voice and he keeps the listener entertained for the entire duration of this audio production. I would have liked more diversity when it comes to switching between characters and a more emotional performance on his part, but he gets the job done and if you listen to the sample and you like it, you can grab the audiobook being assured that you will enjoy it entirely.

Fans of Red Rising, The Hunger Games, and Maze Runner should find First Strike captivating and immersive. This could be a great start to a new, very interesting fantasy series.

If you liked this review, please vote Helpful below and find more of them here and on theAudiobookBlog.

I also post honest reviews at the author, narrator, or publisher's request, you can get in touch with me for more details.