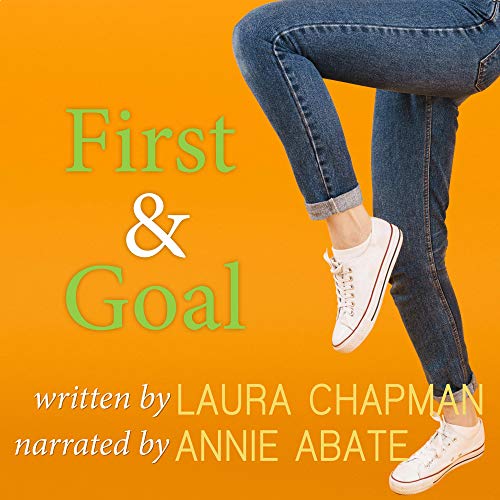 By: Laura Chapman
Narrated by: Annie Abate
Try for $0.00

The new girl in town, a fantasy football league full of eligible bachelors, and only her dignity and heart are on the line.

After coming up short in her last relationship, and consequently losing her job, she’s in rebuilding mode, living in her brother’s basement while trying to save up enough money for a fresh start. On a whim, Harper decides to impress her new co-workers by joining their fantasy football team. The only problem: She doesn’t know a tight end from a running back or a sleeper from a keeper.

It doesn’t help that she almost immediately finds herself drawn to her two biggest competitors. There’s the bad boy former college football star, who is now a minor celebrity, and the mild-mannered high school coach, who may have a few tricks up his sleeve.

Harper is out to prove that when it comes to love - and fantasy football - if you can’t beat ‘em, you’d better join ‘em. Then beat them.

From the award-winning author of Playing House and Counting on You, First & Goal is laugh-out-loud romantic women’s fiction about starting over, learning to trust your heart, and building your own happily ever after.

What listeners say about First & Goal

To be honest I've heard about Fantasy Football but I didn't know much about it. This book takes Fantasy Football to a whole new level. It's a flirty and romantic sports adventure that takes an unfamiliar subject and makes it an interesting and fun story. If you love sports romances put this one on your list for sure. :-).

Note: This one does have adult language and non-explicit sex.

I would like to thank the author, narrator or publisher for providing me this review copy in exchange for my honest review.

First think right off the bat were the voices. I tried to suck it up and get invested in the story. The problem was is the main character, Harper, came off as a total brat. I’m not sure if the voice had something to do with it or it was really how it read but regardless, I had a hard time liking her.
The more characters the book introduced the worse the voices got. I could not picture the guys being attractive or cool or normal because they all sounded so stupid. I had to stop.

this was a fun and cute read. especially if you enjoy football. light hearted easy resd.

enjoyable and funny. I was voluntarily provided this free review copy audiobook by the author, narrator, or publisher.

This is a great book; this is the first book in the Queen of the League series written by Laura Chapman and narrated by Annie Abate. When Harper Duquaine's no-nonsense approach to work unintentionally ruffles the wrong feathers at her new job, she joins her co-workers fantasy football league to prove she can hang with the guys. The problem is she has no clue when it comes to football. Embroiled in a world of lineups, stats, and trades, Harper's quest to make nice topples when her competitive streak emerges. And her promise to herself that she'll be a strong, independent woman and leave the drama and heartache behind is seriously tested when she catches the attention of her two biggest competitors: J.J., a local celebrity determined to win a fantasy championship, and Brook, the mild-mannered coach who seems too good to be true. Both threaten her resolve to remain single and, more importantly, her chances at winning the prize pool.

The narrator Annie Abate did a wonderful job with this book. She did a great job with the different voices of each character in this book. It was very easy to listen to and I didn’t want to stop listening until the end.

If you are looking for a great book with well-developed characters then you need to listen to this book. I am looking forward to listening to the next book by this author and narrator.

Would you listen to First & Goal again? Why?

I would not listen to this story again. While I found the story enjoyable I wasn't overly fond of the narration and it wasn't a story I would listen to/read again. It just didn't take me away

Would you be willing to try another book from Laura Chapman? Why or why not?

Did Annie Abate do a good job differentiating all the characters? How?

1st time listen to this author

I was voluntarily provided this free review copy audiobook by the author, narrator, or publisher.  laugh out loud funny very enjoyable.

What did you love best about First & Goal?

It really captures the passion of a newly discovered fandom. In this case it was football but anyone who try's something new and ends up enjoying it can relate to this story.

What other book might you compare First & Goal to and why?

I don't really know of any comparison.

What does Annie Abate bring to the story that you wouldn’t experience if you just read the book?

She brings a flirty vibe with her narration and I swear you can picture the character rolling her eyes just by the tone of the narration, her exaggerations and personality really make the character lively.

What I really loved is how Harper made me think of my crazy football fanatic Aunt who will totally jump up and down on the furniture when her team scores. But more than that I loved how she learns to not be so serious, and ultimately gets that it's just a game. Her romance was cute and Brook was a total sweetheart...JJ was not my favorite character, but you be the judge for yourself. I would recommend this book, though I would add a warning that there is a good amount of football technical jargon, though a lot of it was explained and you don't really need to understand it all to enjoy the story. I obtained my audiobook copy for free from audiobook boom for my unbiased review.