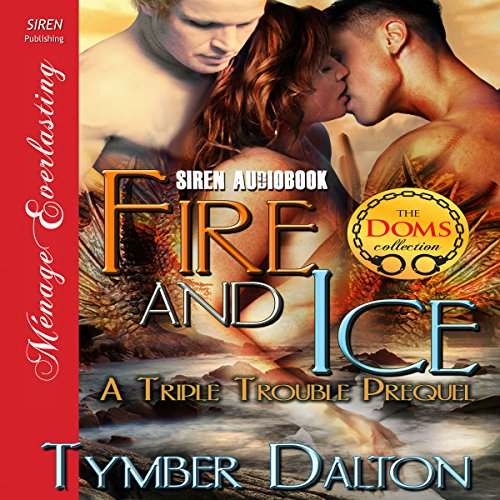 By: Tymber Dalton
Narrated by: Veronica Heart
Try for $0.00

Lina thought surviving her Yellowstone vacation was hairy. She doesn't even have time to enjoy her newly discovered powers with her two hunky dragons before they and Brodey Lyall's wolf pack must band together again to find out who's responsible for grisly dragon murders.

As Lina finds out how deeply their tragic past is entwined with the present, new allies join their quest to hunt down the killer before he can strike again. But the more Lina learns about the past, the more questions she has.

In their transcontinental journey for justice against the vengeful and psychopathic cockatrice, Lina and her ever-expanding adopted clan have to rely not just on her random and unreliable incendiary powers, but on the skills and memory of a sadomasochistic immortal. The future happiness of the Lyall brothers depends on it, as do all their lives.

And she doesn't even have a goddess 101 handbook.

Note: There is no sexual relationship or touching for titillation between or among siblings.

This book ends on a cliffhanger, and the story continues in the Triple Trouble series.

What listeners say about Fire and Ice: A Triple Trouble Prequel

This is a well thought out, interesting premise for a romantic erotica story - have humor, mystery and intrigue (with some puzzles/clues for the characters to figure out along the way); action and adventure taking place around the world, and paranormal/magic/shapeshifter elements thrown out over many eras/lifetimes for the characters - plus all the different sexual tastes you can think of.

The author, Ms. Dalton does a great job keeping track of her characters, though some tweaking in the writing would have been great (Lina is suppose to only see blue when a vision represents the future). A couple of the bad guys' names were a little confusing to me as to why they were already dead - but I see there are a couple of other stories that are 'prequels' to Fire and Ice, so I guess I'll pick those up in Kindle to see what they were about.

The narrator does a good job with almost all of the accents, especially Scottish - her character voices were distinct enough that I could tell which person was speaking when.

This audiobook was provided by the author, narrator, or publisher at no cost in exchange for an unbiased review courtesy of Audiobook Blast." I found this book interesting at first it was a bit different because of the way it was read almost a singing to it but after I got used to it the story was good and worth the read so I would tell my friends about this title

Definitely not your typical 'erotica' story - it's really more action/thriller based with a lot of humor throughout. Great for us guys that like beat 'em up/blow 'em up stories :-)

That was tough - Lena and Jocko get top honors. There are too many interesting characters to really choose from. I liked the snarky humor given to Lena's character.

Have you listened to any of Veronica Heart’s other performances before? How does this one compare?

Ms. Heart is great at male and female voices - she always keeps a story interesting with her narrating style. I'd say the only downside is her French and German accents were the only weak points in this particular story, but fortunately, for characters who didn't have major roles.

Definitely was chuckling at certain points :-)

Makes me interested in checking out the rest of the Triple Trouble series!

I loved the storyline and was well written.

Dragons, Weres, and Goddesses... Oh My

Fire and Ice Lina, the two dragon shifters, Jan and Rick, werewolf Brody, and Zach have just escaped the Yellowstone vacation being persuade by the cockatrice. Lina has found out that she is a goddess but she has no control of how to use her power. Zach has also been with her from the moment he and Lina were born. When Lina was born in the present time, he was there to protect her and to informed her of her past.

During her journey from the East Coast to Britain, Lina is discovering from her recessive memory that Jan and Rick were her husbands in her first past life. They are to remain together if they are to defeat the cockatrice from taking over the world.

Fire and Ice has a very good storyline but the dialogue between characters needs works. The sex scene dialogues felt as if they were forced and a bit unrealistic in the bedroom. Lina from time to time, would be assertive and then submissive. Her personality isn't consistence in her relationship with Jan and Rick. Her past life shows more of her character and personality consistence and strong.

I was given this audiobook by the narrator via Audiobook Blast in exchange for an honest review. I was not compensated or influenced in any way for writing this review.

There Be Dragons Here!

Would you listen to Fire and Ice: A Triple Trouble Prequel again? Why?

No. In the first place I never reread any books for I have so many on my list to read, never enough time to re read. Second, I did not like the narrator, her tone and cadence did not set well with me.

I would have to say Lina was my favorite character. She had so much on her plate. Dealing with her past life and current life. She was so strong, compassionate and courageous and tried her darness to try and help others and so afraid in doing the wrong thing.

Yes and no. I have listened to Veronica before and and she almost ruined a very good story line for me in the style of her voice, especially when she talked slow and more especially during the love scenes. Half of the time I was so engrossed in what was happening in the story I forgot to be annoyed with her voice. So it wasn't a total lost.

Yes and I did. I love paranormal books and I love Tymber's writing. The story was fast paced, so intriging, just couldn't stop listening. The many characters were well fleshed out, just loved them all.

It is still a well told story

I have to be honest, I felt kind of lost through this, I figured as a prequel I did not need to know what happened before but I was wrong…and I did not realize there were two other prequels/stories prior to this one….that’s what I get for grabbing this one before checking where it is in the series…..simply because I like the author. It is still a well told story, not necessarily a favorite as I’m not sure how much I actually like Lina….to me she came across a bit whiney in the first half or so of the story (or maybe it was just the narrator who I did not care for at all), while Lina’s character did step up to the plate a bit later in the book, for me the damage was done.

So the gist is, we find out how Lina is the human incarnation of the goddess, and she gets to remember all of her past lives so she can be ready for the confrontation with the cockatrice (I'm picturing the one from Harry Potter and the Chamber of Secrets as I was listening to this). With all of the other characters, the Wolves, Baba Yaga and her younger sisters….there is a lot going on and it seems that this book ties in with the Lyall Brothers who we meet in the first Triple Trouble book (after I finished the audio I looked up the series…did not want to look first and end up coming across any spoilers), so now I need to read these in the proper order. Taking my feeling lost out of it, it was a good story.

Veronica Harte is a new to me narrator, while I can’t say I cared for her narration of this audio, I would be willing to try something else maybe in a different genre to see if she is a narrator I would want to continue with. I did not care for the breathy type tone so after about 20 minutes I upped the speed to 1.8x which helped the story immensely for me (it is possible it stopped later in the story but I could not tell at the increased listening speed).

So, writing was good – 4 Stars, story was good – 3½ stars, but the narration – 2½ stars, I’ll be checking to see who the narrator is for the rest of the series before I decide if I am going to listen to it or just read it.

Audiobook was provided for review the narrator.

I love Tymber Dalton's stories but the speaker for this book makes it difficult to stay engaged with the story. Her cadence is weird and the way she draws out the words makes it hard to listen too. For this book, I will stick with the written words.

horrible performance of a fun story

The performance is so bad I can't enjoy the story that I have read and reread countless times. This is the first time I may not finish an audible book. Please NEVER use this actress again!!!!

Had so much potential Until....

This story was well written but sadly the narrator ruined it. The narrator would speed up and then slow just bit. you couldn't catch everything and the voices she tried to mimic was like nails on a chalkboard. I couldn't finish the book or get pass chapter 12 of 33 . I hope the remake this book with a better narrator. The story sound so interesting. This audiobook was provided by the author, narrator, or publisher at no cost in exchange for an unbiased review courtesy of Audiobook Blast."