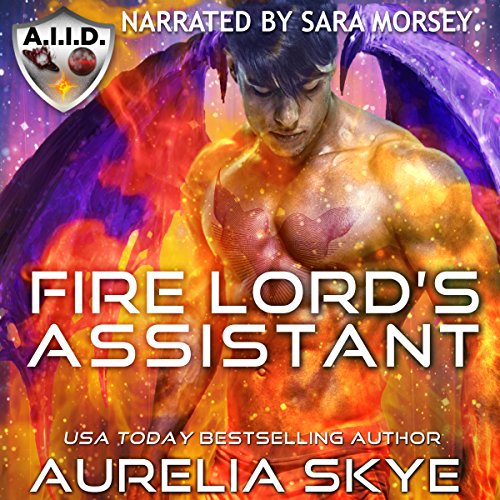 By: Kit Tunstall,Aurelia Skye
Narrated by: Sara Morsey
Try for $0.00

The Alien Immigration and Integration Department monitors activities of aliens living on Earth while hiding their presence among us.

Junior AIID agent Lauren Sage is unexpectedly thrust into the biggest case the Department's had in years. She's sent to work undercover as the assistant on Kerr Dracos's stage act. He's created a home for displaced aliens from all over the galaxy, recreating an old-fashioned sideshow in the Grotesquerie. Humans think it's an illusion, remaining unaware the "freaks" in the show are actually aliens living among them. But someone is using the show as a way to sell illegal and dangerous alien technology. Kerr's brother has been implicated, and he wants the truth to clear Kex. She wants to solve the case and stop dangerous weapons from getting into the hands of amoral thugs. They have a common goal, but that isn't their only connection. Their chemistry is scorching, and his nightly fire performances aren't the only thing heating up between them.

Slow start but worth the wait as it's under four hours long. Totally loved them but wished there was a better explanation or some defining interactions that validated the strong chemistry between Kerr and Lauren. Being the romantic hussy that I am, I was disappointed that Kerr's physical description and actions were somewhat lacking.

Narrator did a good job although her voice seemed "old" for them.

One Thumb and a Waggled Thumb ;)

The story began slowly but then picked up and became entertaining and enjoyable. I like that the aliens were hidden in plain sight. I think there are some here on earth now walking around with the regular humans. This story had suspense as well as romance. Sara Morsey did an OK job with the narration. I received this free copy audiobook at my request and have voluntarily left this review.

I was pleasantly surprised with this story. it had a good flow, very well put together and immediately grabbed my attention. the dialogue was organic and natural. the world building is BRILLIANT though not displayed as well as I'd have liked. perhaps theres a chance of a second book that may offer more? very very very interesting premise and I would LOVE to read a series based on this, nix all the romance or at least have it cut back and not a focus of the story.

however. i absolutely detest the narrator, poor cadence and despite the wonderful story i had to fight to pay attention to the story. it was hard not to zone out and even harder to differentiate the characters "voices". if this were to become a series a different narrator would be needed.

I think this is the first time I have listened to Sara narrate and I loved the sound of her voice. I loved the idea of aliens hiding in the open on earth. The idea of illegal alien tech getting out and Lauren having to join Kerr's traveling show to investigate is pretty awesome. This entire story was a bit different than anything I've ever read to this point, but it was really awesome all the same.

3.5 stars
Overall very entertaining and enjoyable story. Interesting premise of the Aliens being hidden in plain sight. What a name the Grotesquerie. Just the name makes you want to avoid it. The story has kind of a Men In Black feel. Being a shorter story the synopsis tells you what you need to know. Except that for a shorter story it's pretty darn good , although I wish it had been a bit longer.

Sara Morsey did a good job with the narration. This is the first time I think I have listened to her narrate a story. Pleasant voice. Easy to listen to. Clearly spoken. Pretty good character voices. Overall very enjoyable.

I was voluntarily provided this free review copy audiobook by the author, narrator or publisher

5 Star Story To Me

I got this book via audiobook boom. I loved this story, especially the ending. I loved how the authors wove the love into the story without all of the angst involved. So many attempts on Lauren's life and each time Kerr was there to save her. Each was told in such a manner that you just wanted to see what would happen next. I knew that there was something strange about Lauren's partner from the beginning but what finally happened was unexpected. The hallmark of a good story. The narration was spot on in every scene.

I really enjoyed the love story and the mystery and intrigue. It was a book that is a bit outside of my norm but I figured I would try it as I enjoy some of the authors other books.

WOW this was a fantastic audiobook and loved the action, adventure mystery and romance. The characters in this was absolutely fabulous and ❤️ it. Has me wanting more. Narrator did a fantastic job also on this.

Interest piqued by aliens among us and an agency to keep things in check only to not have all humans knowing they exist. I bought in to going undercover but it was just so blatant the direction of things. Not enough air time with the fire lord.

The narrator did a good job but could have been better to help me fall in love.