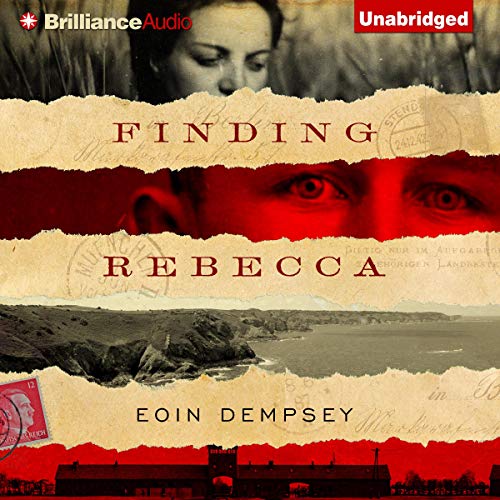 By: Eoin Dempsey
Narrated by: Napoleon Ryan
Try for $0.00

Nothing could keep Christopher and Rebecca apart: not her abusive parents, or even the fiancé she brought home after running away to England. But when World War II finally strikes the island of Jersey, the Nazi invaders ship Rebecca to Europe as part of Hitler’s Final Solution against the Jewish population.

After Christopher and his family are deported back to their native Germany, he volunteers for the Nazi SS, desperate to save the woman he loves. He is posted to Auschwitz and finds himself put in control of the money stolen from the victims of the gas chambers. As Christopher searches for Rebecca, he struggles to not only maintain his cover, but also the grip on his soul. Managing the river of tainted money flowing through the horrific world of Auschwitz may give him unexpected opportunities. But will it give him the strength to accept a brave new fate that could change his life - and others’ lives - forever?

What listeners say about Finding Rebecca

Inexpertly researched, "sight-only" description, clumsy characterization, rushed plot and a weak premise, coupled with modern sensibilities smeared over 20th century scenes and dialogue that makes characters indistinguishable from each other. I wanted so badly to love this book, but bad writing ruined it in only six chapters.

As a huge fan of historical fiction primarily with WWII stories I found this story to be too far fetching to be believable. I enjoyed it enough to listen to it all the way through but there were too many powerful moments that I thought were too important to skip. I expected a lot more emotion from Christopher - I felt like it was more an outline of the events that happened -almost like a report. Dempsey fails to portray the raw emotion Christopher goes through after tragic events - for example, when another guy gets shot breaking into Christopher's office to save the little girl he was hiding there and cover Christopher's tracks for him you see no emotion or devastation after really - at least not to the point that you'd expect to him to go through once he is alone and has a chance to privately grieve over the events.

Another moment I was like "what?" was when Lahm tells Christopher he can see right through him during the card came. That really jumped out to me like something big was going to happen with that foreshadowing but nothing really transpired from it.

The end of the war, the aftermath and all that transpires is completely gone. Dempsey just jumps over all of that and picks up 13 years later. Why? That would be one heck of a story. Lets face it Christopher didn't really make any friends among the SS - He comes out of nowhere to "Canada" implements all these new procedures that completely change what some SS might think of as a "good operation" by taking away the perks of their job with random searches - busting a lot of guys with stealing etc etc. At the end of the war, it was every man for himself so when the time comes to point fingers and get themselves out of trouble, you would think a lot of SS men would like to see Christopher go down.

You would also think there would be a huge plot line with him saving all those children - I highly doubt in the real world that type of operation would go smoothly with no glitches or near disasters.

I think the story needed more depth, more emotion, and definitely more details. I wish we could of heard Rebecca's story from her viewpoint of what she was going through. At the end when we find out Rebecca is married, but is she really? Was it just part of her story? Everytime he pushed for detailed she deflects. Overall Dempsey gave us just the barebones of what could of been one hell of a story or stories for that matter. I loved where he was going as far as the concept but had he expanded and went a little deeper I think this could of been amazing.

I couldn't finish it

The narrator was very good. That's all the good I have to say about this book. I listened for about an hour and 1/2 and then stopped. It just plodded along. I didn't think the character development was done very well. The author didn't engross me in the story. It seemed a bit disjointed. The story was about 9 hrs long and at 1.5 hrs in I was thinking either 'lets get this party started or hurry up and end.' I decided to end it early and put myself out of my misery.

He is OBSSESSED with her

Kind of an implausible, near stalker-like WWII love story.. Unique. Not my cup of tea. Overly dramatic, the narrator could have a side gig in horror movies. Strange all around.

I found myself holding my breath and with tears in my eyes throughout this read. Not that anyone wants to see the day-to-day affairs of the most horrible places on earth at this time up close, but it is imperative for us to know and understand the depth of horror and evil that was done to too many precious souls. I don't want to give any of the story away, but to experience a love story amidst Hitler's Hell, is incredible. The ending of the story, which is set in New York is quite remarkable. I found it engaging from start to finish. The historical element of this novel is quite fascinating and I definitely recommend this book.

Beautiful and heart wrenching at the same time

Another amazing read by Eoin Dempsey. After I finished White Rose, Black Forest, I had to find out what the great reviews if this storyline were about. Set in the WWII era again, it describes in raw detail and emotions the tremendous horror of WWII and amidst it all the light and love people tried to keep as well as give and find. Every evil act bore into me with a deep pain felt throughout my body. These stories weren’t new to me. As a German, I grew up with my grandpa’s sometimes talking about the war. My step-grandpa more than my mom’s dad. I’ve never been to Auschwitz but my mom has and she told me she got sick in her stomach walking the paths so many walked to their deaths. And somehow ironically, as I’m listening to these cruelties that were committed, we are witnessing the American government under Trump tearing innocents young children from their parents at the Mexican border. How can we have not learned from history?

Eoin has quickly become my favorite writer! I absolutely love his WWII era novels. I love it when a book leaves me wanting more. I actually teared up at the end. This book is historical fiction. It's about a little boy (German) and little girl (Jewish) who meet well before the war. They grow up together as best friends and, you guessed it, they fall in love. Of course she has to register, he becomes an SS soldier but this story is so much more! If I say any more I will give away too much. This has become one of my favorite books and I promise you that it's well worth the money!!

This story will likely stay with me for a long time. Lots of tears. it was a fantastic journey. 100% recommend.

This book was both heartwarming and heartbreaking at the same time. The truth of Auschwitz was hard to hear, but the people deserve for their stories to be heard. The only thing I didn't like about the audio was the voice of Rebecca. It didn't seem to fit her. I would definitely recommend this book though.

Finding Rebecca A must read

please give the book a go like I did you will be sprized with the out come like I was.

excellent read. sad, descriptive. a book that will stir so many emotions from happiness to anger and tearful

The premise of Finding Rebecca and its WWII setting really appealed to me, and I was looking forward to reading it. However, I have found in the past that novels set in WWII, especially concerning the holocaust, rely hugely on the ability of the author to get the reader to connect with the characters to create a believable narrative set in an era that has been so extensively documented. There were two moments in the book where I felt a genuine emotional reaction - the times when Christopher had his back against the wall, feeling that all his efforts had come to nothing. For the rest of the book I really struggled to feel connected to any of the characters, who at times were rather wooden and bland, with their alleged love for each other and lust for life not communicated adequately. Despite some genuinely interesting historical details, I thought that some of the events described were extremely unlikely, given the circumstances at Auschwitz. So whilst parts of the book were intriguing and kept me reading on, I struggled with others, like the long prelude of Christopher and Rebecca's childhood, which didn't add much to the story. The ending was long-winded, repeating the same things over several times, and finally losing any emotional connection I might have felt. Overall, an ok read, but not a memorable one for me.