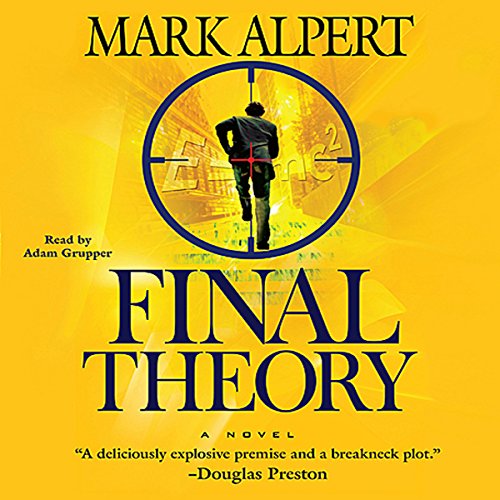 By: Mark Alpert
Narrated by: Adam Grupper
Try for $0.00

Columbia University professor David Swift is called to the hospital to comfort his mentor, a physicist who's been brutally attacked. With his last words, the dying man gives his former pupil a seemingly random string of numbers that could hold the key to Einstein's last and greatest secret: Einheitliche Feldtheorie, The Theory of Everything.

Einstein's proposed Unified Theory - a set of equations that could explain all the forces of nature - would have revolutionized our understanding of the universe. But Einstein never discovered it. Or did he?

Within hours, David is arrested by the FBI and taken to a secret interrogation center. But the FBI isn't the only faction pursuing Einstein's long-hidden theory. A Russian mercenary wants to force David to talk - and he will do whatever it takes. On the run for his life, David teams up with an old girlfriend, a brilliant Princeton scientist, and frantically tries to piece together Einstein's final theory to reveal its staggering consequences.

We used E=mc2 to build the atom bomb....What could we do with the key to creation?

Seamlessly weaving real science, history, and politics with an intriguing love story, Final Theory expertly combines fact and fiction with nonstop heart-pounding action in a plot that will have you riveted until its explosive end.

"Wow! Einstein would have loved this book. It's a great thriller, it has a sure feel for politics, and the science is both fun and solid." (Walter Isaacson, author of Einstein)

What listeners say about Final Theory

Hasn't this been done before?

Sorry, willing suspension of disbelief was just a few light years out of reach for this story. Not even an interesting moral dilemma tucked in there anywhere. Ultimate boredom set in around hour 3. I stuck with it to the end to see if it would get worse. In that regard, it met all my expectations.

This story follows the Da Vinci Code formula quite closely. If this does not bother you, this is a very good story with very plausable science and solid history of Einstein's life. If you like science, you should love this book.

I had hoped for more, but the author has hope

I had hoped for a good story, with interesting characters where the author also provides a painless education on physics. The story and character were acceptable but not memorable. I did not mind giving it the time to finish the book. The information on physics, quantum or classical was not giving the attention I would have thought a story that is based on a supposed secret unified theory by Einstine should have been given. An average book.

I thought it would never end...

Endless chase story driven by an inane and stupidly improbable story line. Really irritating narration (enough with that outrageously comedic Indian accent already). Flat to no character development. I forget what writer said it, but it has been noted that, when developing character, if you start with a stereotype, you will wind up with nothing. That's what happens here. One after another character has been done, done, done. To death. Putting them all in one story is almost too amazing not to admire on some masochistic level. The narration and accent are done with such amateurish production that instead of enhancing the story, it seals its banality. Come on. The bald Russian villain who always has an Uzi and a bottle of Stoli at his disposal, avenging the death of his family at the hands of Delta Force commandoes and hoping to incinerate Wash. D.C. by particle accelerator toward that end. Too stupid to know who he works for, but smart enough to commandeer and operate a particle accelerator. The fat blond"babushka" FBI agent who carries a flask of moonshine with her on suspect interrogations (huh!?) and, despite her physical limitations, is able to hustle her way up a mountain trail in backwoods Georgia ion hot pursuit of three adults and an uncontrollable autistic teenager. Or Alabama. Or wherever that scene was set. Uncontrolled use of profanity underscores the author's limited language resources. Someone give this guy a thesaurus.

At the moment, I have 27 minutes left to go on this audiobook. The big finale is coming. Ho hum. Please, just make it quick. I'll listen to the end with the same sort of horrified fascination that might hit me as I flip the channels past Dr. Phil trying to help someone undo the trainwreck that they call their life. Had I known that this thing would never improve, I would have backed out at 2 or 3 hours. You have better things to do with your life. Skip this torture.

The idea of a lost Theory of Everything is a nice premise. The writing is
more than adequate from a style perspective. He also did an admirable job of
working in twists that are so important to a story like this. The pacing was
good, and the science was nicely handled. Then there are the problems...

A character engages the safety on their revolver. (Revolvers don't have
safeties.) A character "smashes" a computer on the floor and, voila, we have
parts everywhere. Among these parts, he is able to spot the hard drive
because it looks like "a turntable with glass platters." He proceeds to
smash the platters into tiny shards. Good grief. Every time an author does
something like this, it yanks you out of the story and it takes time to
reestablish the immersion. I find this way too often with authors who
obviously have zero understanding of things of the real world, whether the
topic is cars, guns, computers, etc.

The more troubling issue with the book is the ultra-poor character
development, both on the micro and macro levels. On the micro level, there's
just little there to make one bond with the individual characters. They're
stereotypical and wooden. On the macro level, the evil government is after
the poor innocent little people while an evil Master Killer stalks them, as
well. Yawn.

Finally, although it contributed absolutely nothing to the story, the author
had to take time to inject his liberal politics. The evil vice-president
with a crooked smile has to run the country for the "boob" from Texas.
Again, yawn. Maybe the author found this cathartic, but it's an incredibly
stupid thing to do in a book that has nothing to do with politics. By
including elements like this, he added nothing to the story, but did manage
to insult any conservative who happened to have bought and read his book.
Not smart to alienate half your market for no reason other than your own
need to "vent."

Einstein is rolling in his grave!

This book is billed as being scientifically smart, but there was little in this book to merit such praise, either scientifically or otherwise. The characters were hackneyed caricatures whose involvement in the ludicrous storyline were simultaneously painful and predictable. The science was over simplified; it was less like learning about a new and novel theory than being spoon fed equations that had been softened to the point rancid repugnance. There is much beauty in physics, and it is a shame that the author was unable to capture that facet of a most illustrious discipline. Although the author gives credit to great physicists of the past, I find it ironic that the protagonist's job of a Historian of Science is occasionally mocked for its implied intrinsic inadequacy to those practitioners of hard science. Being able to look through the filter of time, evaluate, understand and restate the ideas of value that make up our scientific history is a skill that deserves more respect than the author allows. Perhaps if those skills were more valued, this book would have lived up to its claim as a scientific wonder.

From the violent opening scene, I was not sure I was going to like this book. But my perseverance was well rewarded. A terrific thriller with a little science mixed in with pseudo-science. I recently listened to 3 sciencey thrillers, including Stephenson's "Reamde", this one was the best.

You will like this book if:
1 you believe all US law enforcement and military personell are incompetent and/or evil
2 you think that the toughest, smartest, people in the world are foreign mercenaries, college professors, lawyers and newspaper reporters
3 you like being able to predict the story as it happens and the "heroes" being saved by their adversaries acting totally out of character at the exact right moment to save them.

Along the lines of Angels and Demons or the Da Vinci Code, this one seeks to find the truth to end all truths. I enjoyed the narrations immensely and I'll look for other books narrated by this one. As for the story, it was well-researched and the story was well-written, well-edited, but a bit formulaic and, for me anyway, a bit too predictable. I think this book will make a great movie and I'll be there to watch it. Interesting plot, well developed characters, and I learned something in the process. What more could I ask for.

Has A Political Agenda

The story could have been ok however, the author must still be pissed about the the Gore Bush Election. All the villians come from the Bush Administration. The The Military are a bunch of incompetent thugs. The Hero's are from higer ed hookers and a autisic kid. The Political agenda made it hard finish. Even Rush Limbaugh got a little verbal jab. I regret wasting a credit.