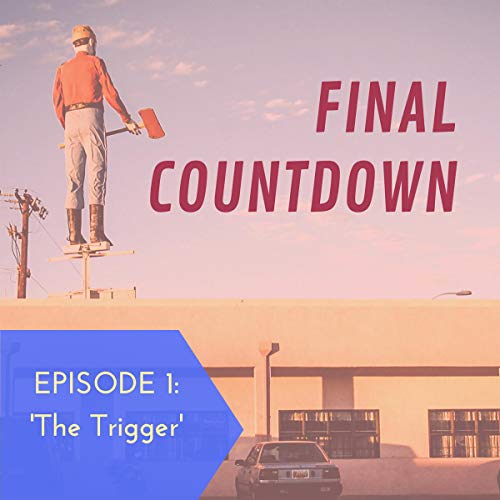 Two hilarious hard-luck traveling salesmen in the Southwestern USA become accidental outlaws when their counterfeit Mexican kitchen products go murderously and hilariously haywire. It leads us through sizzling psychedelic interludes, chase scenes, and a climactic conclusion with a border-tripping gunslinger known only as Johnny W!

Final Countdown is chock-full of the offbeat characters of the American Southwest and border towns, featuring sizzling, surreal psychedelic flashbacks, and vivid postmodern time stretching. A dark comedy about two accidental outlaws in pursuit of the American dream!

Take a trip into the darkly comedic underbelly of the 21st-century USA! Join us on the journey with Final Countdown!

Please note: The Trigger is episode one in the Final Countdown series and is suitable for listeners 18 and above as it contains profanity and some mild sexual content.

What listeners say about Final Countdown

This one is a gem!

Even though this is my first time trying an audio book, I have to say that Final Countdown is a real gem…an original, well written story with colorful characters, and wonderful descriptive language that is oftentimes very funny and poignant. Not only that, it is rounded out with really great narration- something that an audio book truly cannot survive without. Final Countdown has all the right ingredients.