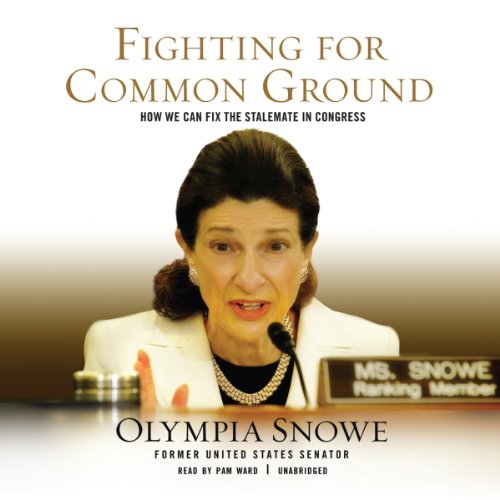 An outspoken centrist, Senator Snowe stunned Washington in 2012 when she announced she would not seek a fourth term and offered a sharp rebuke to the Senate, citing the dispiriting gridlock and polarization. After serving in the legislative branch at the state and federal levels for 40 years, including 18 years in the U.S. Senate, she explained that Washington wasn’t solving the big problems anymore.

In this timely call to action, she explores the roots of her belief in principled policy-making and bipartisan compromise. A leading moderate with a reputation for crossing the aisle, Senator Snowe proposes solutions for bridging the partisan divide in Washington, most notably through a citizens' movement to hold elected officials accountable.

Senator Snowe recounts how the tragedies and triumphs of her personal story helped shape her political approach. Born in Maine, Senator Snowe was orphaned at nine and raised by an aunt and uncle. When she was 26, her husband, a Maine state representative, was killed in a car accident. Already dedicated to public service, she ran for and won her husband’s seat.

Fighting for Common Ground includes anecdotes from throughout Snowe’s career and addresses her working relationships with Presidents Reagan through Obama, Senator Ted Kennedy, Majority Leader Bob Dole, and many others, as well as her involvement with the most talked-about legislative challenges of recent decades: the country’s response to 9/11, the 2008 financial crisis, the Affordable Care Act, the debt ceiling debacle, and much more.

Drawing on the lessons she’s learned as a policymaker and the frustration she shares with the American people about the government’s dwindling productivity, Senator Snowe passionately argues that the government has now lost its way, shows how this happened, and proposes ways for the world’s greatest deliberative body to once again fulfill its mission.

"Olympia Snowe has left the Senate, but thank goodness, she hasn’t left the fight. After decades of leadership as a force for moderation and common sense in Washington, she now raises a banner as a private citizen in this well-argued, compelling account of what’s gone wrong in politics - and what can be done. It is especially refreshing to hear the perspective of an admired, moderate Republican who has always put country first." (David Gergen, director of the Harvard Kennedy School's Center for Public Leadership)

What listeners say about Fighting for Common Ground

The narrator provided a very strong and simple tone in her reading. Moreover, the text was very compelling listening. Snowe writes candidly about what is truly wrong in Washington and goes to great lengths to highlight those issues. The narrator does a great job underlining key points and getting the overall point across that Snowe is conveying.

Olympia Snowe (one of my favorite Senators) is one of the last, true bipartisan leaders in the Congress. She hits the nail on the head on numerous issues and offers concrete solutions to problems that the Congress is facing.

Snowe pulls no punches and points out the flaws and fallacies of the Senate; the lack of cooperation and what the reasons behind that lack of cooperation are tied to. She's plain spoken and Pam Ward (the narrator) does a bang up job telling the story which is as much about Snowe's own adventures in public service than ideas on fixing Congress.

It's a great listen with great stories and some funny foibles, as well.

Maine's noted Senator writes a book about the US Congress, and the narrator can't be bothered to check pronunciations of prominent Maine locations. "Banger" for Bangor, A-Ruse-tuke" for Aroostook, "Muh-key-us" for Machias -- fingers across a chalkboard.

Snowe's insight into why the US Government is broken, and how to fix it.

Who would you have cast as narrator instead of Pam Ward?

Anyone with enough interest in the project to look up the correct pronunciations. Ward's voice and inflections are close to Snowe's, but these errors are horrid.

It was awesome until the mispronunciations slammed the listener upside the head and out of the book.