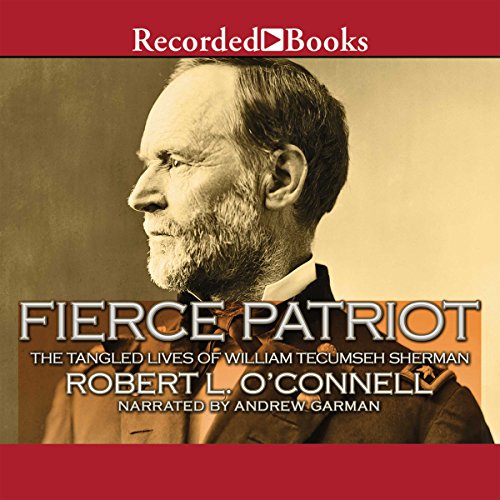 By: Robert O'Connell
Narrated by: Andrew Garman
Try for $0.00

With a unique, witty, and conversational voice historian Robert O'Connell breaks down the often paradoxical, easily caricatured character of General William T. Sherman for the most well-rounded portrait of the man yet written. There were many Shermans, according to O'Connell. Most prominently was Sherman the military strategist (indeed, one of the greatest strategists of all time), who gained an appreciation of geography from early campaigns out west and applied it to his famed Civil War march. Then there was "Uncle Billy", Sherman's popular persona, the charismatic and beloved leader of the Army of the West, and instrumental in the achievement of the transcontinental railroad in his post-war years. This Sherman, as O'Connell writes, was "the human embodiment of manifest destiny". From north to south and east to west, Sherman dedicated his life to keeping the United States united. Finally, there was Sherman the family man, whose tempestuous relationship with his wife (and stepsister!) Ellen is out of a Dickens novel. Throughout, O'Connell breaks down the misperceptions about Sherman, bolstered both by contemporary journalists and by the work of modern historians. O'Connell makes a compelling case that Sherman's march through the south was not a campaign of unmitigated destruction, but a necessary piece of strategy and the perceived chaos has been overblown. O'Connell's Sherman is ultimately a complicated and quintessential 19th-century American. Robert O' Connell worked as Senior Analyst at the U.S. Army Intelligence Agency's Foreign Science and Technology Center and was a contributing editor to MHQ: The Quarterly Journal of Military History.

What listeners say about Fierce Patriot

I found this book very captivating. I have listened to it twice. Sherman won the civil war, or greatly assisted in ending it. He was a military genius who wanted and was successful in disgracing and humiliating the southern plantation owners. The march was genius. His dislike of the media and war itself is part of the mystique.

Too many modern analogies and moral equivalence to hold up in the long run.

Narrator also sounded too young and snarky for the material. Reading speed was slow enough that I listened at 1.25x speed.

A complete production and biography

Andrew Garman gives a clear and well modulated narration of Robert O’Connell’s biography of General William Tecumceh Sherman, that is exceptionally engaging and edifying. If one seeks a well organized book on Sherman with a good scope vertically and horizontally, I would strongly recommend this book.

Broad sweeping opinions about Sherman. The story line was lite. Seemed to go off on tangents. Gave up two thirds the way through.

William Tecumseh Sherman was born in 1820 in Ohio. His family nicknamed was “Cump”. He was the grandson of Roger Sherman of Connecticut a signer of the Declaration of Independence and one of the architects of the Constitution. WTS’s father moved to Ohio in 1811 and set up a legal practice. He fathered eleven children and died unexpectedly in 1829. WTC was adopted by Thomas Ewing a friend of his fathers and a wealthy lawyer and politician. Sherman’s brother John Sherman became a lawyer and politician. He was a U.S. Senator from Ohio during the Civil War and after.

The first part of the book covers Sherman’s early life, his time at West point (1836) and his career in the army. The section that covers the Civil War is extremely detailed. In the Civil War Sherman was assigned to serve under Major General Ulysses S. Grant, they fought together at Shiloh, Vicksburg and Chattanooga. Sherman was promoted to Major General and turned loose by Grant in 1864, with an independent command, to rip out the logistical innards of the Confederacy. O’Connell goes into meticulous detail in Sherman’s “March to the Sea”. This is the largest part of the book and the most through.

The middle of the book covers Sherman’s career from after the Civil war to retirement. WTS was made General in Chief of the Army when Grant became President. WTS over saw the Westward expansion of the Nation, including the building of infrastructure such as roads, railroads and protecting settlers.

The last part of the book covers WTS personal and family life. He married Ellen Ewing his adopted sister. They had seven children. His wife travel with him to some post but preferred to stay at her father’s home in Ohio most often. They had seven children, one son became a priest must to the dismay of Sherman. Ellen was a devoted catholic but Sherman was a Calvinist. Ellen died in 1888. O’Connell does cover some of the affairs and mistress of Sherman. No biographer, including O’Connell has made the marriage come fully to life, or his well known womanizing. This section of the book is under developed.

Robert L. O’Connell has a Ph.D. in History and spent thirty years as an analyst at the National Ground Intelligent Center. Currently he is a visiting Professor at the Naval Postgraduate School and author of numerous military books. O’Connell takes a fresh viewpoint from other writers I have read on Sherman to date. The book is well worth the read for those interested in Civil War history or in general history. Andrew Garman did an excellent job narrating the book.

No study of the Civil War can be understood without a close scrutiny of Sherman. This book seals the argument that any study of the last half of 1900's Americana must also include William Tecumseh Sherman, as well his brother John.

A different side of General W. Tecumseh Sherman

As my 3 book about Sherman this was a very good rendering of his life from yet a different angle, I liked it very much.

War is always a gamble. To win, some risks must be run and others must be avoided. Sherman, who always saw himself in uniform as an instrument of the State, welded the legions the Union assembled to crush the South. Along with Lee and possibly Grant, he was one of the three great generals of that conflict. This book tells the story of Sherman as a youth, West Point cadet, a business man, an officer and a general, and a family man. While generally flattering, it is also mildly critical in some respects. Unlike Lee and Grant, he continued to lead the U.S. Army long after the war, overseeing its downsizing, but husbanding its core competencies. The authors credits him with fathering the army that was later able to enter decisively into two world wars. Well written and well read, history buffs with scant knowledge of Sherman will appreciate its comprehensive and lucid style.

I read this book as a follow-up of American Ulysses: A Life of Ulysses S. Grant. This book completes the story of the Civil war from the perspective of the Union army's perspective. Both books describe the two general's background and experiences at West Point (they were two years apart), service in the Mexican War with many of the officers who were to become generals in the civil war (both north and south), their attempts to get out of the army and work in the civilian sector only to be called to their real natural skills of commanding troops in the Civil War. This is where they belonged. These two generals were very close and relied upon each other for advice and understanding. They fought together until the surrender of Vicksburg when Grant was promoted to command the forces of the Potomac and fight General Robert E. Lee while General Sherman was in charge on continuing the battle into the heartland of the south in his march to Atlanta and to the sea. This book fills in the gap of what was happening in the rest of the war while the nation's attention was focused on General Grant. An outstanding read.

I found this to be a good general biography. The author includes much of his own analysis of Sherman and his life.