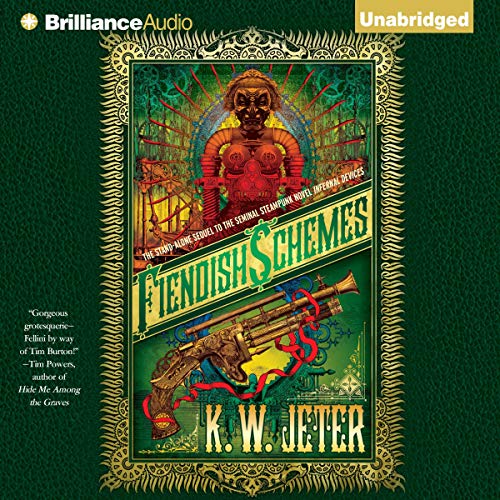 By: K. W. Jeter
Narrated by: Justine Eyre
Free with a 30-day trial

In 1986, K. W. Jeter coined the term steampunk, applying it to his first Victorian-era science fiction alternate-history adventure. At last he has returned with a new tale of George Dower, son of the inventor of Infernal Devices, who has been in self-imposed exile…accumulating debt.

The world Dower left when he went into hiding was significantly simpler than the new, steam-powered Victorian London; a mad whirl of civilization filled with gadgets and gears in the least expected places. After accepting congratulations for his late father's grandest invention - a walking, steam-powered lighthouse - Dower is enticed by the prospect of financial gain into a web of intrigue with ominously mysterious players who have nefarious plans about which he can only guess. If he can make his father's Vox Universalis work as it was intended, his future is assured. But his efforts are confounded by the strange Vicar Stonebrake, who promises him aid, but seems more interested in converting sentient whales to Christianity than in helping George. Drugged, arrested, and interrogated by men, women, and a steam-powered Prime Minister, Dower is trapped in a maelstrom of secrets, corruption, and schemes that threaten to drown him in the chaos of this mad new world.

What listeners say about Fiendish Schemes