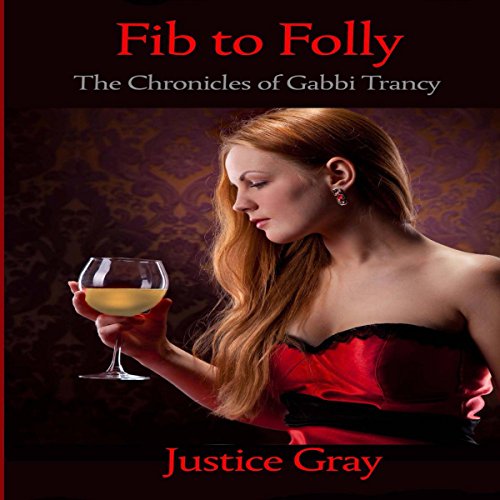 By: Justice Gray
Narrated by: Karin Allers
Try for $0.00

Gabbi loves her wine almost as much as she loves her men. But being the attention whore that she is, she couldn't hang in there when her marriage needed mending; instead she ran to an old high school sweetheart, making up stories that her husband abused her so all would feel sorry for her. When friends would confront Gabbi with their disbelief of Travis' abusiveness, she would say that he put on a good act. Gabbi got what she wanted - for a while. However, shortly after she thinks she has everything she wants - karma comes back to haunt her, and we find her in the worst situation. Could it be a tragic ending for Gabbi and those involved...?

What listeners say about Fib to Folly

.
Gabbi is a wife to Travis and mother to their three children. The gist of the book is Gabby deciding whether she wants to sleep/be with men associated with her job or work it out with her saint of a husband. It is like watching a tennis match as Gabbi lobs from one man back to her husband back again. Where will she end up and with whom? Will she would lose her family and/or does that even matter to her? Is the grass greener with Prince charming? Or will or romantic dreams turn into a nightmare?

Karin Allers is exceptional! Her smooth tenor is perfect for the female lead but is also deep enough to perform male characters like Chris, Travis and others. Also, her portrayal of children is believable.

Overall, the story focused on a self absorbed Gabby and her exploits. It started to get tedious but picked up a bit midway through. It was like a teeter totter – up, then down, up and down. Perhaps a bit more editing to shorten it by an hour would have gotten the same story told without dragging.

There were intimate scenes, but Justice Gray left the details to the imagination of the listener. There was a bit of strong language.

*I received this book in exchange for my unbiased review. I hope that you will take a moment and select – yes – below if you found this review helpful. I invite you to follow me on Audible to read my recent reviews. Thank you!