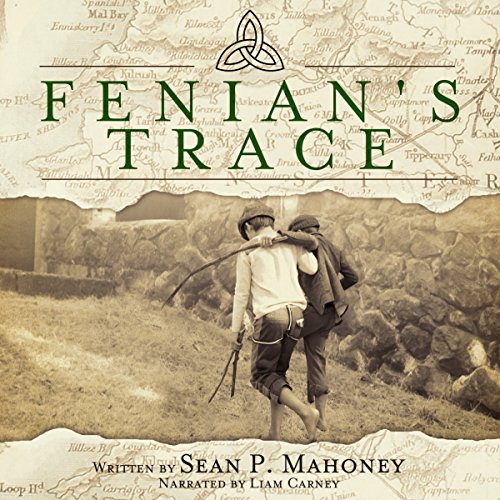 By: Sean P. Mahoney
Narrated by: Liam Carney
Free with a 30-day trial

Fenian's Trace is the tale of two lads raised as brothers in the west of Ireland during the early 1900s. Though they choose different paths when the rebellion comes, they both take a fancy to the spirited and alluring Maria upon her homecoming from America. It's a story told by Mr. Clancy, a gruff old Limerick publican who fancies himself as yet another in that grand tradition of Irish storytellers, though one who refuses to let his gentle inebriation or any distractful facts trouble his telling. It's a story of secrets and sacrifice, fathers and sons, love and loyalty. It's an Irish story.

What listeners say about Fenian's Trace

Gripping and a Pleasure to Listen To

The book focuses upon two "brothers" born in 1901 near Limerick. We watch them mature in the turbulent time leading up to Ireland's independence in 1921. Mr. Clancy, a Limerick pub owner of the Republican bent, tells the boys tales of Ireland's patriotic figures, about men such as Brian Boru fighting the Vikings, Hugh O'Neill and the Nine Years War, Oliver Cromwell's religious intolerance against Catholics, the daring exploits of John "Fireball" MacNamara, the Irish Rebellion of 1798 and finally the growing strength of the Sinn Féin movement established in 1905. Mr. Clancy doesn't hide where his affiliations lie and he states outright the value of a well told story with there being no harm in adding a bit of embellishment! These tales, told to the boys and to us, depict the culture that has shaped them. In watching their reactions we observe their different personalities. The history is not boring, neither for them nor for us; it is exciting and draws the mood, the place and the feel of the boys' Ireland. With this background the story unfolds.

The reader comes to understand why the two boys live as brothers under the same roof, though they have different surnames. The reader comes to understand why their father is not fighting for the IRA. Young in the beginning, only twelve, we watch them mature. A girl enters the scene. She is loved by both, but she loves them both too! You think this sounds contrived? Well not here. The book is about the Irish fight for independence told through the boys’ lives as they become men and through their families and those they love. The first two decades of the 20th century and Limerick, that is the setting. The sentiments of those involved feel utterly genuine. The reality of the decisions that need to be made and their consequences for all those involved hit home with force. This is a book both about men and women. There are gruesome details of torture. Maria, the woman they both love, how can she choose between the two? Must she choose? Will she have any opportunity to choose? Does one die for Ireland or does one die for a friend? Both the love aspect and the IRA struggle pulled me in equally.

A dialect is not just the pronunciation of words but also the words used, the expressions, the idioms and the whole way of talking. Everything here is very, very Irish, and I loved it. The author’s choice of words goes far in making this book feel genuine. Sure there is swearing, but every swear word belongs. We are delivered real life and real dialogs.

I do wish a short author’s note had clarified what was fact and what fiction, although often this was not hard to distinguish.

The narration by Liam Carney is read with a superb Irish lilt. I do think this further enhances one’s appreciation of the lines. I would rate the narration with four stars, drawing off one because Carney read, for my taste, a bit too fast. He sings Irish tunes with just the right nuance, not too sentimentally but in a gruff masculine voice. There is even an addition of Irish music introducing a chapter or two. There is not too much of this to make it annoying or too repetitive. Often an interruption for music breaks the flow of the story, but that didn’t happen here, probably because it was not excessively employed. Personally, I think this book should be listened to in the audio format rather than read, doing so one feels immersed in Irish culture.

This was a gripping story and a true pleasure to listen to.

Fenian’s Trace tackles Irish history played out through two brothers coming of age in a small town (and pub of course!) around WW1. The Irish narrator absolutely sucks you right in to the story with his brogue bringing out the full effect of the stylistic writing. This treasure will make you laugh, cry and hope all within a few pages of each other and then does it all over again! What an amazing find and recommend for anyone looking for grand drama. Enjoy!

I really enjoyed this book. The characters were very likable, honest, and I really got a feel for what Ireland when is like back in the day. I will try to find another book similar to this.

Caprivating and riveting. Enterrwined history and heart. Took me back to Ireland whom I love.

This is a book which you sink back into your chair and just listen to .... allowing it to wash over you in musical waves of texture and poetry.   I started listening to it and by the time 45 minutes were past, I already hoped that there were more books out.  Maybe it's just the narrator's voice.

When I first started listening to this, I thought it would be a Tom Sawyer/Huck Finn sort of book.  But it isn't.  It's a story of two young men growing up during the first world war and the Irish Troubles.  Connor is the quiet one, dreaming of traveling the world while keeping his head down and slogging through life. Rory is his brother, hotheaded and believing in the Irish tales of Brian Boru and the Fenian raids; wanting to fight for Irish independence with the Sinn Fein, the rise of the IRA.  It's this hotheadedness that shapes the story. Love also shapes this story.  Love of country, of history, of family, and of a girl.  Its about sacrifices, two generations of families intertwined by politics and by love, and the history they have to live with.

This story will bring tears to your eyes and a lump to your throat.  Well written, well narrated, I look forward to more by this author and narrator.  Please!!

Fenian's Trace is an outstanding well written historical fiction story by Sean P. Mahoney. Through its pages we learn of one small village's struggles with the British occupation of Ireland leading up to the Easter Rebellion and ultimately Ireland's independence in 1921.

The story begins in 1901 Limerick with two young brothers who desire to do nothing more than hitch a ride on a canal boat carting barrels of Guinness. As the years roll by, they eventually succeed in riding on that boat and along the way they meet some very interesting men who enjoy telling stories of Irish heroes and legends. As teens, their interests start to veer in different directions and they fall in love with the same girl. Eventually they choose different paths dealing with the rebellion.One passionately acts out against the English occupation (like all of the great legends before him), and the other takes the path of a pacifist, all the while remaining loyal and true to his family and the other villagers. It goes without saying that sacrifices are made which are utterly heartbreaking. [The last 1/3 of the book is truly moving and brought me to tears more than once.]

I listened to the audible version of Finian's Trace narrated by Liam Carney, who is a well known and resepected actor. His warm husky voice and gravely tones were ideal to portray a gruff old Limerick pub owner who enjoys the grand tradition of Irish storytellers. I enjoyed it so much, I hope someone from Hollywood reads it and makes a movie out of it, like they did with Frank McCourt's Angela Ashes in 1999. In summary, I higjly recommend this book!