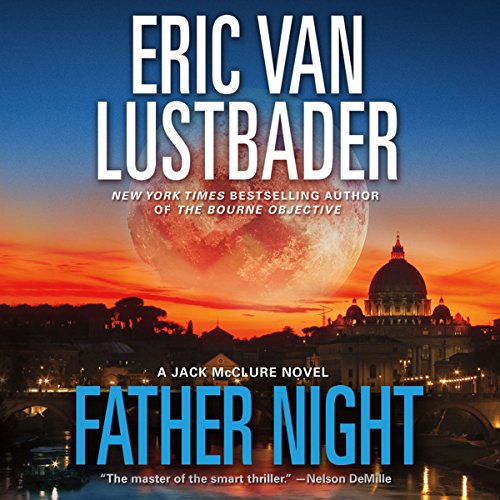 By: Eric Van Lustbader
Narrated by: Richard Ferrone
Try for $0.00

Jack McClure is no stranger to trouble. From his street-savvy education on the mean streets of Washington, DC, to his military service and operations with ATF and DoD, danger has never been too far away. But ever since Jack McClure saved the life of Alli Carson, the first daughter, he’s discovered a whole new breed of enemy. These heartless wielders of power do not make headlines. They strike fast and silent, and leave no trace, manipulating foreign affairs from the shadows. And now Jack McClure has become their number one target.

In Father Night, a tidal wave of reform is sweeping across the Middle East. Up for grabs are major seats of political power, and at the center of it all are two men, giants of the vast criminal underworld. Their power knows no bounds. Their war knows no end. One is known as Dadya Gourdiev, the other is an underworld mystery, known only as the Syrian. But hiding in the shadows is a man history might have forsaken, but whose evil is still very much alive: Father Night.

What listeners say about Father Night

Worst narration ever, He reads through action scenes with no emotion what so ever. He gives ridiculous Scooby Doo villain voices to the antagonists. It was torture.

Like Ludlum, Van lustbader's books have complicated plots, unimaginable situations and good guys/ladies that are bad and vice versa. I would have preferred the abridged version. In spite of these remarks I await his next book with Jack, Allie and Annica. Unrequited love and the bond between a young girl and her mentor have a grip on me. Damn the predictible unpredictability, throw away characters and Allie 's sudden ability to become super teen. I'm a sucker for this series.

Will love endure, will Ally grow to have a series of her own, only time will tell.

Lustbader did an excellent job with this book. The fast moving, ever changing, plot had me captivated. Another great read in this series.