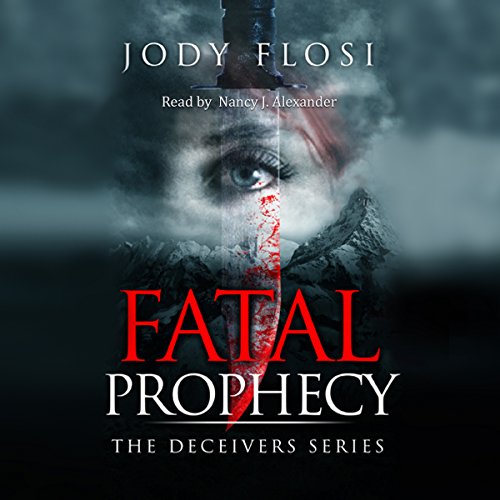 By: Jody Flosi
Narrated by: Nancy J. Alexander
Free with a 30-day trial

What would you do to save your loves ones from the deceitful cult that holds them captive?

A work of burning hope in the midst of dark intent, Fatal Prophecy is a fierce suspense novel that enacts the dilemma faced by millions of people snared by the lies of a false prophet and trapped in cults today.

FBI Agent Sophie Bayard survived the Jonestown massacre as a child. Now she carries that memory as she observes a similar religious cult. For two months she steals time to watch over the wilderness compound, to methodically check each camera blind.

Admittedly obsessed, compelled to prevent a reoccurrence of Jonestown or what she witnessed with the Branch Davideans at Waco, Sophie intends to stop Father Will before the FBI descends on the compound to usher in another version of Armageddon.

Father Will, leader of the religious cult, has built a fortress and a prison inside a mountain honeycombed with caves and tunnels. With the aid of computer technology, he selects each new disciple carefully, transferring their wealth to his own accounts as he brings them into the fold.

The false prophet enacts a brilliant manipulation of scripture in the midst of madness. With the selfish certainty of a sociopath, he prepares his followers for destruction. With the usual bag of mind control tricks, Father Will controls his followers as he prepares to trigger the mass suicide with the sacrifice of his first-born son.

Heroine Sophie's chilling experience at Jonestown keeps the tension building as she relates that event to the escalating dangers presented by this false prophet.

Secondary characters present sympathetic and heart rending contradictions, especially Maya who refuses to allow Father Will to wed her teen child, or to leave without her family.

What listeners say about Fatal Prophecy