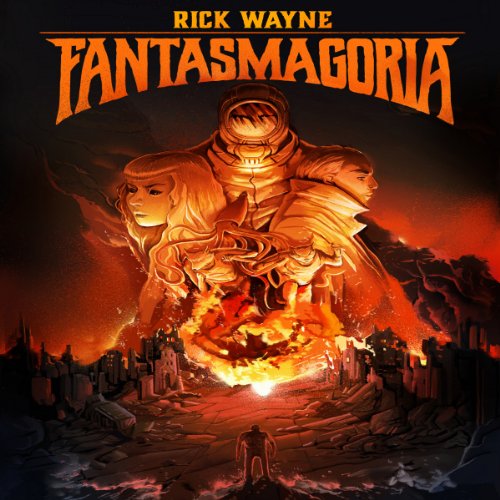 A scoundrel with a secret seeks the key to escaping the end of the world. An exiled gunslinger, waiting to die, is called back for one more job. A radioactive man is sold into service as an assassin by a mysterious cult.

As their stories intertwine, all three are caught between rival mobs, an invincible killer, and a plot to upset an uneasy peace between once-warring nations. While far above the planet, a phantasmal apocalypse looms.

Dinosaurs. Robots, cannibal fairies, a brain in a vat, a giant squid, Nazi Amazons, super-soldiers, a war dragon, an assassin cult, unicorns, were-ninjas, animal-human hybrids and a kaiju god of destruction. The battle for the fate of the world starts with a betrayal in a cemetery . . . and a stray phallus.

A different book, great from start to finish

I feel like I stumbled upon greatness. He's a new and unknown writer and I took a gamble on it. I was and am still amazed at how great this book turned out to be.

I loved the "outside the main plot" talks by the two "friends" at the bar. But all the characters were well done.

What does Matt Thurston bring to the story that you wouldn’t experience if you just read the book?

His mafia type accents for these characters were great. I loved it.

He did what many authors can't seem to do, he finished his story perfectly. Too often I am disappointed by flat endings. This ending keeps pace with the entire book.

You will not say "I've read 10 books with this same plot"...I guarantee it.

Would you listen to Fantasmagoria again? Why?

Yes. There are so many details in this book that make up a rich setting. Listening once is a treat. Listening again cements those details you may have overlooked.

What was one of the most memorable moments of Fantasmagoria?

The cannibalistic fairies kept in the lab definitely got my attention.

Not for children, Fantasmagoria provides unending entertainment for adults. The first scene takes you through a graveyard with two men and a bag of phalluses, on their way to sell human flesh to a jackal-type humanoid. Next you see the scientist with his fairy specimens, feeding one fairy to another. This book is full of antiheroes, and the storylines all have dark grit with the prevailing morals. It provides an interesting juxtaposition that keeps you on your toes.

Not my normal genre but a great book

What did you love best about Fantasmagoria?

Very unique. I read a lot of audio books and they can get repetitive. This book keeps you on your toes. Rare for a story like this to develop the characters or the story as well as he did while keeping the over the top adventure/comedy.

What was one of the most memorable moments of Fantasmagoria?

Ha, if i had one word to describe this book it would be memorable. So, i guess the whole book is memorable. few examples; drugged up dinosaurs, cannibal fairies, hookers licking exposed nerves.

I normally read classical literature, non fiction and Historical fiction. Rarely do I enjoy a fantasy novel. The characters dont normally have any depth and the stories are always full of plot holes. this book was able to develop characters and provide a realistic adventure in an outlandish fantastical world. Never boring and always unique. if you are looking for something different than you have ever read, this is the book for you.

Closest comparisons i could come up with would be the movie- Sin city with crazier characters.

As gripping as a robot hooker's butt

Would you listen to Fantasmagoria again? Why?

Amazons and androids, dinosaurs and drug deals...This book has it all! I would go so far as to say it is the best Sci-fi Western Apocalyptic Goreporn ever written! I have listened to this at least 3 times, and am about to start it again! Seriously. Just buy it.

What other book might you compare Fantasmagoria to and why?

It is without compare.

I laughed myself to tears at times

The story was great and the narration matched it. How could not love this crazy world with its equally crazy mix of interesting, intriguing, and always impeccably real characters?