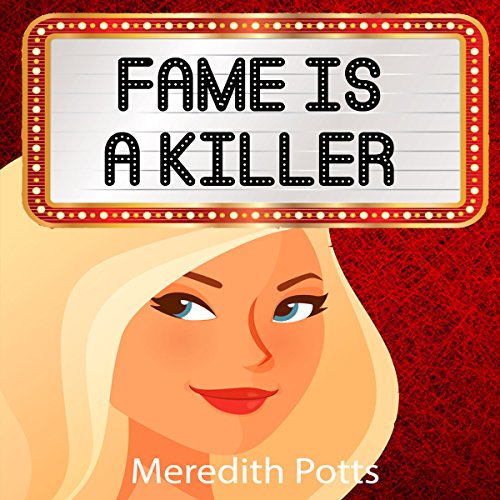 Fame Is a Killer

By: Meredith Potts
Narrated by: Rachel Carr
Try for $0.00

Hollywood actress Hope Hadley doesn't think that things can get any worse for her. In the last 24 hours, her boyfriend has broken up with her and her long-running police procedural TV show has been canceled.

When a homicide detective shows up at her door the next morning with news that her ex-boyfriend has been murdered, she realizes that her troubles are just beginning. She is shocked - not only to learn of her ex's death, but also to find out that the police consider her to be a suspect in the killing.

Hope soon realizes that the only way to clear her name is by finding the real killer herself.

What listeners say about Fame Is a Killer

Where does Fame Is a Killer rank among all the audiobooks you’ve listened to so far?

What other book might you compare Fame Is a Killer to and why?

She is a good narrator with an optimistic perky voice that keeps the story moving.

This is a cozy surprise! Fame is a Killer is a quick mystery featuring Hope Hadley , an actress who has her TV show canceled, is dumped by her boyfriend finds herself as the suspect of his murder. With no alibi, she uses her learned skills from her acting role to seek out the murderer and clear her name. Holly is a strong character, and I find her easy to relate to. This is fast paced, has interesting characters and is full of lighthearted fun.

Rachel Carr's narration is full of the exaggeration and quirkiness that I expect with a character like Holly. She keeps a good pace and made for an enjoyable listen.

In short order, Hope Hadley wraps up the shooting on the last episode of her long-running, newly-cancelled tv show, The Sassy Sleuth, has her boyfriend of the past year dump her for an actress half her age, and, entirely too early the next morning, is informed by the police that said ex-boyfriend, Trent Harper, has been murdered and she is a suspect.

She has no alibi for the one-hour time frame within which he was murdered, because she skipped the wrap party.

When she can't convince police Detective Noble to immediately rule her out a suspect, she concludes she has no alternative but to clear herself by finding the real killer. That this could be dangerous is barely noted in passing.

What follows is just silly, and not in what appears to be an intentional way. Hope asks obvious questions of obvious suspects, is frustrated and annoyed that everyone she questions quickly becomes hostile, and doesn't as far as I can tell uncover anything the quite competent and intelligent Detective Noble wouldn't have found out on his own, much more efficiently and safely. I stand by this conclusion even though he is presented as being impressed by her different perspective and valuable insight, at the end. It just isn't plausible.

Light, entertaining, short mystery story, that may annoy the heck out of you if you like your mysteries to be plausible and reasonably intelligent in how the investigation proceeds.

Not recommended, though I wouldn't run away from it if you have a couple of hours to kill.

I honestly don't remember if I bought this audiobook, or if I got it free as part of a promotion of some kind. In any case, I'm reviewing it voluntarily.

Fame is a Killer - Cozy Mystery

Not as good as I was hoping for. I just couldn’t connect with the main character, finding her shallow and unlikeable. There is a lack of emotion in the story. It ended up being a mystery without the cozy.

The narration was okay, but there was no variety of voices for the different characters.

I received this audiobook free for an honest review from Audiobookworm.

The game is afoot, except...Strike one! Hope Hadley has just wrapped on the final episode of her cancelled Sassy Sleuth show with no roles waiting in the wings. Strike two! Her long-time boyfriend has decided to move on with someone else half his age. Strike Three! Her boyfriend has been found dead bludgeoned with his thespian statue. Strike four? The police have set their sights on her as their number one suspect. Hope has the genes with her father, a thirty-year veteran detective, and her brother, currently a homicide detective, so channelling her on-screen personae makes for a successful combination to sift through suspects and find a killer. And a new career path, maybe, but at least a new direction. The drama, written from Hope’s perspective, is a fun, entertaining cozy perfect with a nice BFF dynamic, perilous predicaments, and “gotcha” ending. Narrator Rachel Carr gives a rousing performance, just slightly over eager in tone and speed. She read in more of a traditional reading out loud with some changes in dialect to portray various female characters, however there isn’t a major difference to depict male characters. None of this effected my ultimate enjoyment...fun! Book one down, onto book two!

I loved this Hollywood murder mystery. Hope Hadley is at the end of her acting career she fears. Her successful detective show comes to end. Her agent can't find any more work for her as casting wants women younger. As if that isn't enough to deal with, she learns her ex boyfriend was murdered. And the detective thinks she is main suspect. She figures the only thing she can do is prove she is innocent by finding the killer herself. Taking the skills she learned as an actor playing a detective she starts investigating. That's where the world of acting and real life differ. Soon she is in real danger. This was a great mystery. I loved following Hope on her investigation and I really was stumped on the killer until the end. I am so glad this is a series. I can't wait to see where life takes Hope next. Definitely recommend this to fans of good murder mysteries that will have them guessing until the end.

Well we get old but don’t like to be put out into the pasture. This is a great story of an actress that became to old to act.
Rachel Carr does great voices, while telling Meredith Potts’ story. I would recommend this book to all ages. Anxious to see how Hope continues her life as a washed out a tree/detective. A must read/listen to series.

Hope Hadley's life was undergoing major changes. She lost her job, her boyfriend, and was accused of murder. I loved how she would not go down without a fight. There were plenty of twists for her to work through and kept me guessing as the story progressed. Rachel Carr was okay as a narrator. I would have enjoyed a little more difference in the characters voices, but overall, this was a good listen.

I received a copy of this audiobook as a gift, and this is my unsolicited review

Like the story line and the characters. Narration was great. Looking forward to more books in this series.

Fame is a Killer

I’ve listened to this Story twice now and for the life of me I can’t work out exactly how she figured out who the killer is. To add more drama at the reveal, the main character does a lot of detective work that we are not told about until the killer is being revealed. I don’t think it’s possible to follow clues and play detective with this story, and that’s half the fun.

Also, the main character is apparently 40 but speaks like a 20 year old. This stopped her feeling like a believable person, and kept pulling me out of the story.