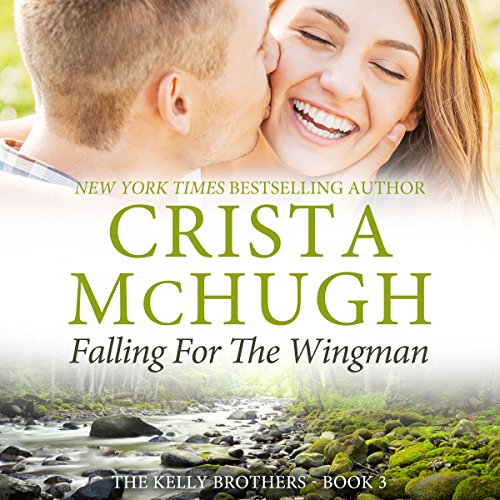 Falling for the Wingman

Lord help the mister who comes between me and my sister...

Air force pilot Caleb Kelly has come back home with one mission in mind: to propose to the woman whose letters and lucky charm helped him survive his deployment in Afghanistan. But when he finds their apartment empty, with a note saying she's left him, he arrives at her mother's house in rural Alabama less than a week before Kourtney is about to marry another man. Now he's out to win her heart again and gets some unexpected assistance from her younger sister, Alex.

...And Lord help the sister that comes between me and my man.

Alex Leadbetter has always thought Caleb was too good for her manipulative, social-climbing sister. She had assumed Kourtney's identity to write letters to him and keep his spirits up until he returned home to the hard truth, never expecting to fall in love with him along the way. After he shows up in town, she convinces him that the best way to get Kourtney back is to make her think he's fallen for someone new--her. But when a fake romance becomes all too real, her deception may leave them both grounded.

Warning: Contains a hero who'd do anything to win the heart of the woman he loves (including enduring a pinched bottom), a heroine who's turned on by a 660-4 pack, a small Southern town full of busy bodies, and classic muscle cars.

What listeners say about Falling for the Wingman

Good listen, enjoy the narrator and of course the author. Going to check out some more of this author books.

Falling For The Wingman

Each Kelly Brothers book gets better and better. Therese Plummer makes the story come alive with the right amount of emotion and you can't help but fall in love with Caleb and Alex.

Falling for your sisters ex can be complicated but trying to get him to fall for you when he comes to try win back your sister before her wedding makes things a bit more complicated . Throw in him thinking that she has been writing him the whole time he was deployed and it was really you makes it even just a little bit more complicated! Come enjoy the ride as the tangled mass works to be untangled

Fallng for the Wingman by Crista McHugh

Alex. She's smart, comfortable in her own skin, says what's on her mind, and isn't afraid to go for what she wants.

She nailed the various accents, temperaments, and personality of all the characters. Male and female.

Hard to choose just one. The writing was consistently brilliant!

​I was lucky enough to listen to the audio version of Crista McHugh's FALLING FOR THE WINGMAN which is the third book in her Kelly Brothers series. This is the first book I've read in the series (and by this author) and I was still able to thoroughly enjoy the story without having read the first two books.

The storyline was fantastic, I loved the characters, I loved the setting, I loved the witty dialogue and the Cyrano twist, and the narrator was the best I've heard in quite some time. I felt she really nailed the nuances, accents, and temperments of each character's personality, both male and female.

The story begins with Caleb, an Air Force pilot who has just come back to the states after a tour in Afghanistan, coming home to a Dear John note from his girlfriend Kourtney. The woman he liked before he left, but fell in love with while he was overseas due to the bonding they experienced through the emails they shared. Not one to give up so easily he heads to Kourtney's hometown to get an answer face-to-face about why she left him. He's hoping the engagement ring he purchased will help to change her mind. Instead he finds the woman he thinks he loves a week away from marrying another man. He still wants answers but it's going to have to settle for getting them from her younger sister Alex. Alex is all too happy to spend time with Caleb because she's had a thing for the sexy pilot ever since they were first introduced. Sister or no, she's more than ready to take a chance he'll finally see her and choose her over her sister.

I don't want to give spoilers, so all I'll say is this book was delightful, Caleb is one sexy hunk, Alex is a smart and sassy southern girl who isn't afraid to go after what she wants and has some really great friends who love and support her, the sexy times were hot and steamy, and Crista McHugh really knows how to tell a story! You don't want to miss this one! 5 stars

If you are looking for a great romance take then Crista mchugh is the author. She never disappoints with the right amount of wit and sauce! Love this series.