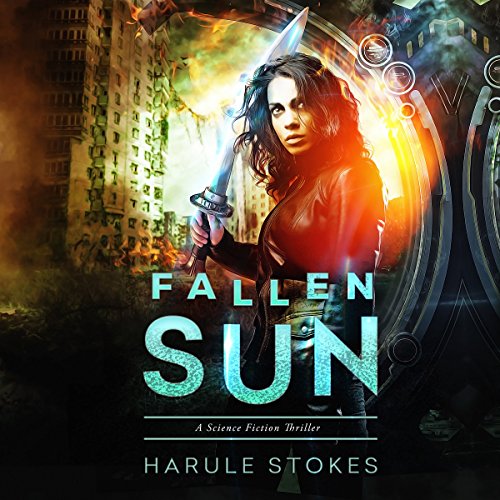 The most powerful living weapons ever created are slowly going insane...

Unrelenting enemies are beginning to fight back with a new deadly weapon...

Will super-soldier Jocelyn Martinez live long enough to save her sisters-in-arms before everything crashes in on them?

You think being a genetically enhanced super-soldier is hard? Trying being a 1st grade teacher. That was a joke Jocelyn use to say to her teammate in training camp. Today, many of those she befriended in camp are dead, and now she's desperate to keep her two sisters-in-arms alive. That's going to be harder than she thought because Ophelia is slowing going mad and Patricia is just a normal human who just happens to be an incredible sniper.

But, how do you defeat a foe that can turn the Earth herself against you?

With the war between the Northern Alliance and Keynosa leaving both of their lands in ruins, Jocelyn and her team are finally poised to win and end the war for good. But a new weapon, one that can instantly stop even a super-soldier with a single shot, has hit the battlefield.

Together, Patricia, Jocelyn, and Ophelia are sent on a mission to destroy this new weapon. These living war machines are in a race against two enemies, but which will destroy them first? The lethal new weapon from Keynosa or their own inner demons?

Would you listen to Fallen Sun: The Great War again? Why?

Which character – as performed by Natalie Naudus – was your favorite?

Did not have one.

I really liked listening to this book the narrator did a really good job of pulling the store together very easy to listen to for hours on end probably going to listen to it again.

The story was well written with very interesting Characters. Jocelyn is a genetically enhanced soldier who has lost many of her friends in the never ending war. She only has a couple of friends left and the enhancements end up causing mental problems with her remaining friends. She wants to save the only friends she has left while trying to survive through the end of the war. The blood and guts of battle make the drama sad and you end up feeling for the situation these soldiers are in. I really enjoyed the story. I received this Audio book for free from Audio book boom in exchange for an unbiased review. Thanks!

Would you listen to Fallen Sun: The Great War again? Why?

No. I don't listen to books more than once

She was very good though the one voice of the wounded soldier was hard to hear at times.

No it was too long

This book was provided free of charge in exchange for a review.

The book involved a group on enhanced soldiers and their struggle to not only overcome their enemy but keep their own sanity.

There were many subplots that involved the soldiers questioning their purpose and that of the politicians who sent them to war. It involved many of the soldiers who suffered severe mental conditions induced by the process that made them super soldiers also.

The main characters always seemed to be questioning themselves also and could not seem to resolve their own inner demons.

It was hard for me to determine if the book was military, psychological political or religious. Perhaps a little of all. Overall a decent listen with good plot and well knitted story and very good narration.

This book goes in my favorite folder!

Fallen Sun: The Great War
By: Harule Stokes
Narrated by: Natalie Naudus
This is an audible book I requested and the review is voluntary.
I enjoyed this military, genetically engineered soldiers, futuristic book so much! It was from one of the few enhanced female soldiers left, and one of the few that hadn't started going insane. Most start losing some sanity and had to take medicine or go in stasis. Once they go psychotic and killing everything and everyone, they stay in stasis or killed. Fallen Sun is the most crazy and brutal soldier that went into stasis but he is let out for one more mission dispute arguments from the couple that survived the last time with him. Has he been in long enough? Really exciting.
The narrator was so good! She brought warmth, emotions, fear, and so much to this book.
Keep a tissue with you while listening. Great book!

This one of the best books I've heard. While I'm not sure I would listen to it again, it is an extremely moving story. There are high triumphs, very dark evils, and an overall theme that will stay with me for quite some time to come.

Great story and characters with a great narrator. I received a free review copy of this audiobook at my request and I have voluntarily left this review.

Absolutely great,original, out of the box, story!

I love this story. The fact that I have never imagined this kind of unique world/characters certainly added to my delight while delving into it. It's a good thing that the main character is a superwoman, otherwise, the story would have been over in about an hour. I highly recommend this audiobook to all. I will be hunting up other reads by Harule Stokes. Now for the obligatory: "I was given this free review copy audiobook at my request and have voluntarily left this review."

This was a really cool super soldier sci fi story. The story had good depth and character developement. I thought the narrator did a good job on bringing the book to life. Lots of emotion came through. All in all, definitely worth giving it a listen.

A little long for me,

I received this book free for an honest review.
I must admit that do not usually get books of this genre. The story was interesting and a really liked some of the characters, however there were many parts that seemed to drag on too long. I found myself wanting to know what was going to happen but wanting to skip ahead at the same time. I will probably try another book by this author if it is shorter.