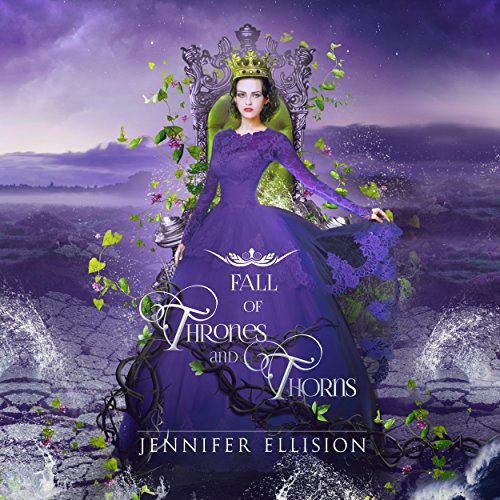 Fall of Thrones and Thorns

By: Jennifer Ellision
Narrated by: Grace Glass
Try for $0.00

After Bree's life was torn apart, Nereidium had represented a haven to her. And, at last, she's arrived upon its shores. But things in Nereidium are not what they should be.

The land is plagued by a rash of mysterious earthquakes, the likes of which it's never known. The governors are distracted by old traditions, while Bree and her friends grapple with changing identities and the sense that the longer they wait to take action...the greater the danger from Egria grows.

Bree is tired of living under the shadow of King Langdon's power. And she's tired of waiting for him to be the first to act.

In this final chapter of the Threats of Sky and Sea series, it all comes down to Nereidium or Egria. To Bree or the King. It's kill...or be killed.

And not everyone will escape the battle unscathed.

What listeners say about Fall of Thrones and Thorns

I started this book and laid it aside numerous times.Finally picked it up again and actually enjoyed it!It is long and drags at times, but if you give it a chance it is a good book.Grace Glass is a wonderful narrator for this.I was provided this book by the author,narrator or publisher.

The writing sounds so poetic in how the moment and feelings are described as we open on the beach with Bree and her friends. Grace's narration keeps a rise and fall to the words and sentences that adds to the feeling we get. Very beautifully written.

We start to see there is more at work than just people and Elementals. The Makers are gods/goddesses that are believed in (though not truly called gods/goddesses) have an influence in what's happening too. They have attempted to contact those of our group in different ways, some ways that may not be direct. It was a gradual draw to this through the books, but we get there and I like it. Though, if the balance in the world doesn't come to an even keel, the Makers may let the world go. I enjoyed this story as we get a connection to the Water Element and gods/goddesses in the world.

Grace feels to put a lot of thought in the story as she voices the characters. The sentences flow neatly together, making us feel as the scene and words are together in thoughts. No sentence or words, unless needed to be, feels to stick out as an extra addition. I like this flow. But, with this strong thinking also comes a feel as though the pacing is slow with the drawing out of the words. This was an easy fix for me as I bumped the speed a quarter to keep going a bit faster.

We start at the exact moment Riot of Storm and Smoke ended.

Everyone's lives are changed coming into this book. Bree's true self is known. Which also goes to say for Aleta as well. Caden left his father, the king, and his land. There are so many possible ways this could play out, and for the good in coupling way. But these are drastic, sudden changes.

We also start to get to know new characters that are from Nereidium. In the beginning, Lady Helen seems nice and could be easy for Bree to talk and work with. I feared she would turn on Bree as others had in the past.

We move through time quickly with this book. We get the telling how many days or weeks have passed as we start into each chapter, if time has passed. There are times we don't get a time frame but know they've crossed sea or land to be to a destination point.

We get the story from Bree, Aleta, and Caden's POV. As all in their group are important, these three are the one's impacted the most and have connections we need to know about. Their feelings and knowledge is very important in how things will play out in the end. Bree grows up in this book, growing into a strong young woman. Aleta, strong as she is, has a brief fall but her determined personality returns and she moves on. Caden still has things to work through as he hasn't faced his biggest. Things come together and work, mostly, out after they all fight for their lives and countries.

There were are few moments with these characters that felt breezed over and not 100% believable for me. The separation from Bree, they didn't work harder to see each other and the time frame apart seems long but may not be as long as I got the feel for. They are determined young adults and this seems to not fit for me. Then when they leave Nereidium, the queen is let go easily. Really? After being lost all these years they'll let her leave without argument? Let alone on such a dangerous expedition? Erm... I don't know. I felt these moments could have been strengthened.

One big fight for part of the crew is very neat as it's a battle of Elementals, nature and humans fighting. Lots happening and sounds fast but cool seeing the use of Elemental powers. I've enjoyed seeing them use their powers in small moments and this is bigger and more action.

In the end this was a satisfying conclusion to the trilogy. I like where the relationships are left. These are young adults with important lives to live. But where the major arc ends is fitting as well.

A Must Listen To Read!!!

Let me first say I was given a free copy of this audiobook for a true and honest review. This is the first book in the series I have gotten my and hands on and I fell in love. Grace Glass did an amazing job narrating this enthralling story by Jennifer Ellision. I especially loved that the people in the series can control certain elements such as water and fire. I can't wait to go back and listen/read the rest of the series. A big thank you again for this opportunity.

Divergent Fans Should Love This Series!

Fall of Thrones and Thorns is a satisfying conclusion to the Threats of Sky and Sea trilogy by Jennifer Ellision. This series is a cross between the Princess Diaries and The Last Airbender with our heroine growing up not knowing she is royalty and with special abilities to control the natural elements. This story picks up immediately where the second book ended with Caden, Bree and Aleta (and their friends) in Nereidium. They are dealing with the repercussions that neither Bree nor Aleta are who they thought they were.

Bree and her friends’ sanctuary in Nereidium is cut short after the city is besieged with unnatural earthquakes. Eventually they figure out the king in Egeria is to blame for such disasters and they head off to stop Caden's father's tyranny (and madness) once and for all. The action in the last 1/3 of the book is non-stop and the conclusion is very satisfying. I also really enjoyed seeing Aletta’s character transform into a strong force to be reckoned with after being such a pampered privileged snob in the first two books.]

Grace Glass narrated this story and she did an excellent job. Grace portrayed both Aletta and Bree as likable characters surrounded by unbelievable events. She had great intonation and pace, keeping the story suspenseful throughout. She had differing voices for male and female characters, and expressed urgency when appropriate. I received a free copy of this audiobook and freely leave this unbiased review. Simply put, I highly recommend this series to anyone who enjoyed the Divergent series.

This audiobook was given to me for a honest unbiased review. This was a fun, different story. This was a great ending to a series. The descriptions of the water county were awesome. This is a good young adult/ fantasy that has adventure and romance, the best kind of story.

I love that we get to follow a group of people who can control certain elements in this book. Some can control water, others fire and the like.

For me, this is the first book in the series I have listened to, but I could still follow the storyline. There was conflict from previous books that was explained well enough that someone who hadn't listened to the first two books could follow, but not so much that I think it would bore someone who had read them. The new world created by the author was amazing.

The narration was also very good. It made me want to listen and finish the book.


This review copy audiobook was provided by the author/narrator/publisher free of charge.