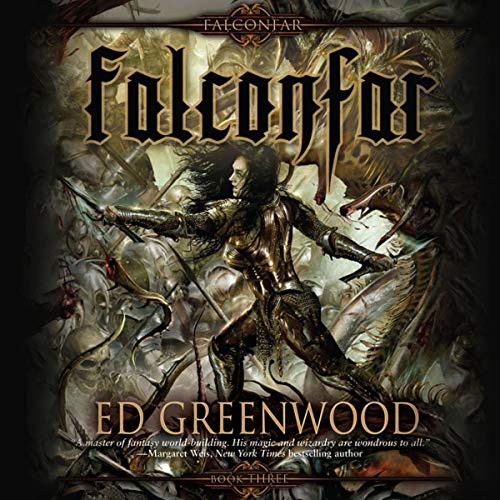 Falconfar is the third thrilling adventure in the Falconfar saga. Fantasy writer Rod Everlar is now hopelessly lost in the magical world he once thought he’d created, as he searches for his only friend, the guide who brought him there: the maimed warrior-woman Taeauna. She has been captured by the evil wizard Malraun, who has taken her to his bed—while Malraun’s armies conquer Falconfar, castle by castle and hold by hold.

Malraun has his rivals, other evil wizards who seek to defeat him and rule all Falconfar. Rod Everlar, the fell “Dark Lord” of legend, supposedly able to hurl world-shattering spells, is feared and hated by everyone...but can’t cast a single spell. Beset by the wizards, their armies, and the dragonlike monsters they command, Rod finds his luck running out as his ruthless foes discover a new world to conquer: our Earth.

Horrible, misogynistic trash. A complete waste of time. The narrator does a decent job but the novel is so bad with no redeeming qualities not even his performance can save it.

From a big fan

I am a big fan of Ed Greenwood, but this book was just not good. It rambled in strange directions, contradicted itself in places, and generally just did not make sense. It had great potential, as the series started well, but sadly did not live up to its potential.

I really wanted to like this book. I thought the series had started off with an interesting premise, but this most recent (last?) installment dragged on and on. For some reason Greenwood brought in the stories of so many uninteresting minor characters it becomes to easy to lose interest. It could be forgiven it you felt that it was building to some climatic conclusion, where they may be relevant, but it never happens. Felt like he was paid by the page and just wrote scenes down. I usually like this author, but it just didn't work for me.