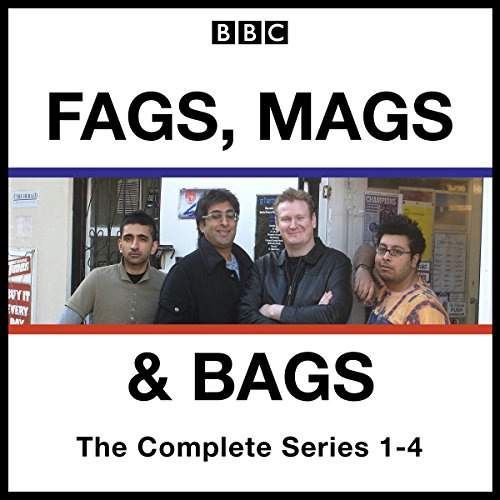 Ramesh has built his shop up over the course of 30 years, and it is a firmly entrenched feature of the local area. He is ably assisted by Dave, a 40-something underachiever who shares Ramesh's love of the art of shopkeeping, even if he is treated like a slave. Then, of course, there are Ramesh's sons, Sanjay and Alok, both surly and not particularly keen on the old-school approach to shopkeeping. However, they are the natural successors to the business, and Ramesh is keen to pass all his worldly wisdom on to them - whether they like it or not....

Series 1: Raising Keenan, The De-Magowaning of Ramesh, Wall of Crisps, Build the Titanic, The Festival of Maltodextrin, January February.

Series 3: Jack Black's Black Jacks, Mr Majhu Goes to Lenzie, The Wrath of Khan, The Lenzie Splicer, Bacon Punctuation, The Fall of Phallon and the Rise of Bugatox.

Would you recommend this audiobook to a friend? If so, why?
Absolutely.

What was one of the most memorable moments of Fags, Mags, and Bags: Series 1-4?
An ongoing dialogue and series of events regarding an inflammatory poster in the shop window was not only incredibly funny but also poignant. I think I would enjoy anything produced by these actors.

Any additional comments?
Listening to this evokes the sense of "being there", for lack of a better phrase. The banter is lively and incredibly funny, whether the topic is serious or ludicrous. It really offers such a uniquely entertaining experience that I've quickly become addicted to it and will doubtless listen to it all again. It is both amazing and great.

A brilliantly written comedy about a newsagent/minimarket's staff and customers. Having the writers perform the main characters really helps them come to life and add some great references to sweets and 'Moving Alan' . I listened to the all four series in a day.

A lovely sanctuary with a wall of crisps

Really funny but also heart warming, genuine, good natured and down to earth, when the world seems a bit much this is one of my favourite haunts and makes me feel everything is going to be okay :)

Five Alive!!!! Both Amazing and Great!

Undoubtedly one of the funniest and most heartwarming comedy series ever!
Laugh out loud throughout and I cannot wait for the remaining series to be available on Audible!
Utter Brilliance!

Hilarious radio comedy at it's best!

Brilliantly funny stuff. If you're familiar with the totally brilliant "Still Game", BBC Scotlands legendary Sitcom, you'll recognise Sanjeevs convenience shop owner, although under a different name and set in a different fictional area of a certain Scottish city. This is the community cornershop "Open all hours" sitcom, updated and uprooted to todays Glascow, featuring a wonderful cavalcade of characterful shopkeers and customers. Very well written. If you love well observed, well written, comedy, you will not be dissapointed. If you're reading this BBC, it's time for the TV version now!

Both Amazing and Great

"five alive" this series is brilliant. for anyone who needs an escape into a place of warmth, laughter and the wall of crisps I would suggest you pick up this series. we need the BBC to release series 5 through 8. so come on and don't be a "surley arse" and invest in this shop based silliness.

A good UK comedy series but like so much comedy it takes time to learn the style. If you liked it on the radio then you will like this book for sure. However, if you jump straight in it is going to take time to get used to it.

Such great comedy from the team, so delighted to find it in the Library. Need more on the radio so we can share more in Audible!

really liked this. real feel good stuff. wish that there were more episodes or even more similar titles

very clever writing, delivered in an amusing way. I enjoyed every moment.
the only annoying but it's the into and outro Every episode.