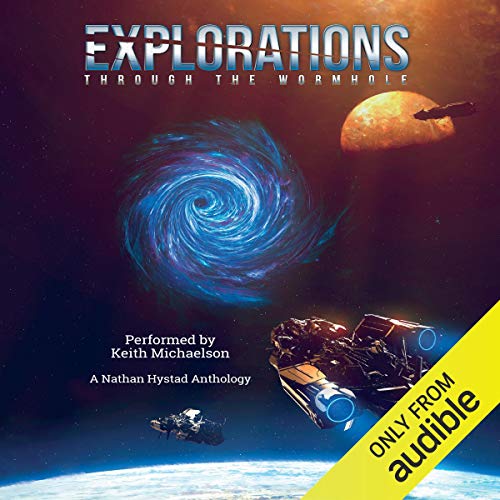 It's 2052 and the first known wormhole appears in lunar orbit. Earth sends a ship to investigate and the future of space travel changes forever. The Solar System develops in many ways over the centuries, but one thing remains constant; the wormholes continue to appear. Join many of today's most exciting indie science fiction authors as they chart a shared universe and future-history, each telling us stories of: Explorations: Through the Wormhole.

What listeners say about Explorations

Normally not a sci-fi guy, but here and there I delve into it. I found this book because of Jacob Cooper. I love his fantasy books. Then, I saw several other big names. I loved Stephen Moss's fear saga. Richard Fox is well known for his military sci-fi, though I've never read one of his books. Ralph Kern appears to have some clout in the genre as well. I hadn't heard of the others, but I've found a new TBR/TBL list thanks to this anthology.

All the stories herein are unique. Ralph Kern opens the book and sets the stage with The Challenge. It was exceptionally well done, and I think the narration did a lot to convince me to keep with this. I'll review that separately, but the characters were genuine to me and I appreciate the voice talent. PP Corcoran's story was perhaps the most unique as it doesn't feature a wormhole, but it still a great short that showcases some skill. I won't go through each of them, but I will say my favorites were PJ Strebor's Flawed Perspective, Charlie Pulsipher's Webbed Prisms, Jacob Cooper's Anathema, and Stephen Palmer's A Second Infection. I really did enjoy Stephen Moss's story as well, though it felt too long. Surprisingly, I thought wouldn't like AI Deniers by Rosie Oliver. But her usage of a news caster to show a lot of what was happening "off paper" was clever.

Anathema (Jacob Cooper) and A Second Infection (Stephen Palmer) both have elements similar to each other. I guess I kind of liked the "sentience" idea of certain...things. Trying not to spoil much. Oh, and I really did LOVE the characters of Lost Colony (Josh Hayes), including that freakish sarcastic monkey (Michaelson's voice for him...yeah awesome), but the story ended a bit flat.

Many of these stories I would like to see expanded. Great beginning threads.

Overall, I'm rating this 5 stars. I think the stories on their own I'd give 4 stars as an aggregate, with the unsocial stories ranging from 3-5 stars. The reason for the 5 stars overall in Michaelson's performance. Even with some mediocre material he knocked it out of the park. Proof again that a narrator helps (or kills) an already good story. I swear the man has a vault of a thousand voices. Ive listened to a couple other of his performances, each very good.

I'm a fangirl of Charlie Pulsipher's Lost Shards series, and I went into this box set thinking it was going to be fantasy with sci-fi elements. I was happily surprised that the opposite was true. This was believable science fiction, along the lines of Felix Savage. All of the stories kind of flow from the same basic story, which gives this the feel of a kindle-worlds sort of gathering. The narrator was engaging, and the stories were all awesome, though the one about the 2nd moon was a bit confusing, at first. All around, five stars!

Always a little nerve racking getting into an anthology...so many different styles and stories that you might catch schizophrenia! This was a great mix. It did have lots of different stories, but you can also just skip around to your favorites without feeling bad.

Stories:
Favorites: The Lost Colony, Through Glassy Eyes, Anathema, Personal Growth.
Liked: Webbed Prisms, The Challenge, Here Then Forever, Flawed Perspective, Dead Weight.
The rest were fine, just didn't do much for me. One was just...weird. Won't single it out. Maybe I just need to listen to it again. Still, I didn't find one that I really disliked, which is waaayyyy rare in an anthology of 14 stories! There is a sequel coming up that I will pick up.

Narration:
Mr. Michaelson did fantastic overall. I WILL look for his other work. I think every character had a unique voice all his/her own. I think he could read tax records and make them interesting.

With 14 different stories, I can't even imagine the effort it would take to narrate such a varied collection of characters. Michaelson proves he merits the praise he's received. Performance and quality of production are of the highest level.

Ok, the stories themselves. Ralph Kern sets up the whole anthology with a great opening story where the initial wormhole is discovered. While not all the stories are directly related to wormholes, they are always there on the fringes. There are several stories that are self-contained, others feel like natural lead-ins to longer stories, some of which I'd love to see further developed.

Stephen Moss's end cap to the collection is long but so well done. I went back and listened to that one twice. Also, stories by Richard Fox, Jacob Cooper, and Josh Hayes really left me thinking about their plot lines. Some great humor in Hayes's story. Cooper's feels somewhat reminiscent of James SA Corey's main crew. Stephen Palmer's was the eccentric and probably a bit too deep for me. All in all, the awesome thing about anthos is the ability to simply jump from story to story, no need for a long time commitment, and get a great splash of enjoyment. Looking forward to the next installment.

I like this anthology . Explorations Through the Wormhole was well done by many different authors. each author was given the same universe to create their story. This led to a good plan for an anthology because you knew some of the background before you started the story. some of the stories I like better than others but all of the stories for good. you would do well to take the time to listen to this anthology.

What did you love best about Explorations?

I can honestly say that I enjoyed each story in this collection, they all centered around the common theme of Wormholes without sounding the same, it was pure joy to the ears!

I was especially pleased with the story "Janus", of course if you look at the moniker I use you might understand why a involving my own personal, minor deity works for me.

I was voluntarily provided this free review copy audiobook by the author, narrator, or publisher.”

is there a coherent story in here? I couldn't tell. yawn. a real waste of time and money. another victim of fake reviews. that's happening a lot on audible these days. might be time to give it up. take out the garbage...

Neat idea but it was just an assembly of disconnected and underdeveloped stories. Couldn’t go past first 1/4 of the book.

although a couple of the stories were not quite to the level I was expecting most of them were quite engaging and thoroughly enjoyable.

Not at all what I thought it would be.

About the story, I thought all the different stories by the different authors would be connected and possibly even similar. They are not. They are completely different short stories except for the fact that they each have a wormhole. I personally don't find it keeping my attention. past books I would rewind to hear something I missed when I would get distracted by doing something, not this book.

I find the narrator very hard to listen to. It almost seems as though he is trying to hard to make his voice sound like a narrator. I myself will avoid him in the future.

More hit than miss, but an annoying narrator

As has been mentioned on the Amazon page for the written book, this anthology has some great stories in it, but also some that didn't measure up. I was expecting the wormholes to be a central part to the stories, but some seemed to throw it in as an afterthought. Overall it is a good anthology and worth a read. I would recommend getting the e-book.

The narrator, however, annoyed me. I found his tone and style off-putting and will try to avoid listening to something by him again. So I can't recommend the audiobook.

Couple of good stories but pretty much all of them ruined by substandard narration. Looking to Audible for refund as just couldn’t finish...first one in over 120 books.

GOOD VARIETY OF INTERESTING STORIES SET AROUND A CENTRAL THEME.GOOD INTERESTING NARRATION.WOULD LIKE TO SEE MORE BOOKS LIKE THIS IN THE FUTURE.