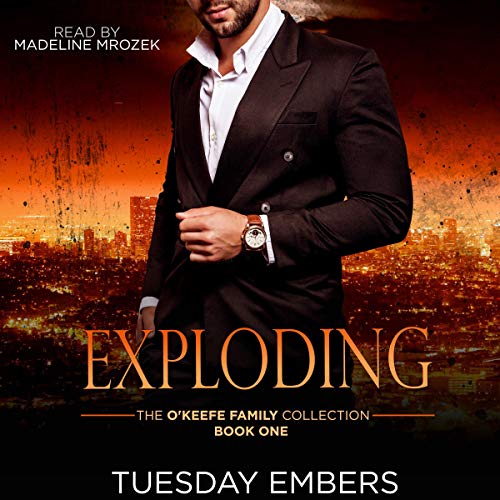 To break away from her overbearing brothers, Fallyn O'Keefe opens a bakery to show them she can do it on her own. She thinks her biggest problem will be defending her storefront from the violence of the rival family, who would much rather see her chased back into the east end of the city with the rest of the brawling O'Keefes. When Vince, the older, terrifying head from the enemy family shows up with flowers instead of his gun, Fallyn worries the fighting between her family and his will escalate from fists to firearms.

Caught between her family and the possibility of more, Fallyn must decide just how much she's willing to sacrifice to keep her business, her secret love, and her life.

What listeners say about Exploding

I can't wait for the second book!!!

Have you ever listened to a book and enjoyed it so much that you checked to see how much was left and got giddy when you realized you still had more than half of the book to go? That. Is. This. Book.

I enjoyed this listen so much and got so involved in this world and the main characters that I did not want it to end.

The narrator was so good! There are a lot of voices in this story and the narrator kept them all separate, kept you listening and involved, and threw in some Italian and an Irish brogue for good measure. Way to go!

The love story between Fallon and Vince developed so sweetly and naturally against the mafia subplot and when it ended (the book, not the love story,) I just wanted more.

I'm sitting here now waiting for book two wondering what Kerrigan, Fallon's brother, is planning to do. I can't wait to jump back into this world!

I really liked this story but I was confused the first half with James. It eventually made sense. Def. will be starting book 2 right away.

The narrator, Madeline Mrozek did a really good job. She is really good at voices between male and female characters which I think is very important when their is only one narrator.

After reading a positive review, I wanted to read ("listen") to this book and boy was i glad i did. It captured my attention and kept me wanting more. I was reluctant to start it bc it spans into 3 books total and like an ending at the end of a book, but here I am, downloading the next one!