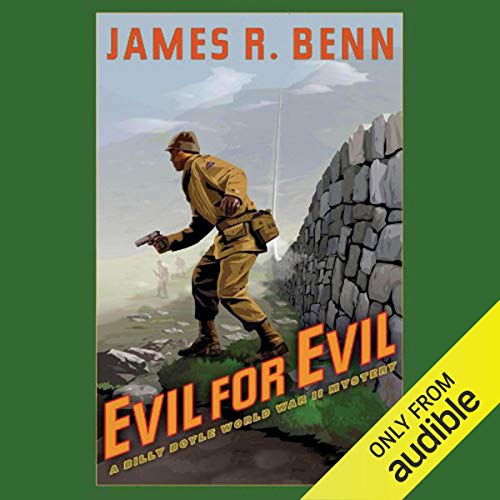 Fifty BARs (Browning automatic rifles) have been stolen from a U.S. army base in Northern Ireland. His uncle Ike Eisenhower sends Billy to recover the weapons, which might be used in a German-sponsored IRA uprising. Bodies begin to accumulate as Billy finds unexpected challenges to his Boston-Irish upbringing and IRA sympathies. There are rogues on both sides, he learns.

What listeners say about Evil for Evil

This series consistently delivers entertaining and engaging stories. This one adds an interesting backdrop of the Ireland conflict. For further details, see my review of: Billy Boyle: A World War II Mystery.

My only problem with this book

the book is a very good read. I've enjoyed the books I've read. I enjoy the reader. The only problem I'm having with this book is a small one. It comes from fact that neither the reader or the editor are familiar with military nomenclature. The story involves Billy Boyle's investigation into the theft of 50 Browning Automatic Rifles and ammunition. The reader constantly refers to the weapons as BARS. Any person familiar with military nomenclature knows the Browning Automatic Rifle is known as a B. A. R. The letters are pronounced individually. Other than that the book is another good story from James R. Benn. This minor issue will not deter me from getting more books about Billy Boyle. I look forward to the next book by James R. Benn

Enjoyed all of these by James R Benn....I hope there are more to come! Great period mystery

a great story and a good performance

a great story about the complex relationships among the Irish of North and South and the title says it all evil for evil. the author paints a vivid picture of Ireland 80 some years ago... this particular story also focuses on Billy Boyles relatives his past and give some of the regular characters a rest.... it's a great stand-alone story as well the audio performance is well done.

Boyle Does It Again

Mark Vietor has done a wonderful job once again by reading another installment of Billy Boyle. I love these books. I very rarely find a series that captures my attention such as the works of James R. Benn. With the exception of The Rest is Silence, I've read/listened these books in order, and this has to be my third favorite so far, behind TRiS, and Billy Boyle (Book 1). I am immediately moving onto the next book, hoping that it surpasses my favorites. I have also preodered Blue Madona, the next book in the series, which releases in Sept.

Perhaps the best of the series at this point. The intrigue is well developed and gives a rare glimpse of life in WWII Northern Ireland and the sad struggle for Irish unity that still permeates the island today.
.

Billy gets to see the old country

Billy gets to visit Ireland for the very first time, but it isn't to drink whiskey with distant relatives. He's on a mission and it involves the Protestants and Catholics, and of course, the war. Billy has a mystery to solve and all sides are implicated.

Benn does a great job stripping away the dreamy idealism afforded to the Boyles in Boston, and Billy realizes that there's blood on the hands of both sides.

A great story, that provides insight into some of the politics occurring in the background of the conflict between the Allies and the Germans. Excellent narration as always.