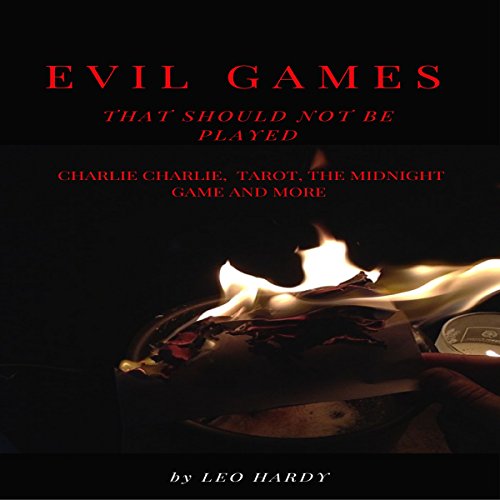 Evil Games That Should Not Be Played

By: Leo Hardy
Narrated by: Trevor Clinger
Try for $0.00

Charlie Charlie, The Hosting Game, Ouija boards, The Midnight Game, and a few more are covered in this audiobook. There are games that have proven to be too dangerous to play, and we are not talking about games that involve fast cars, driving, bullets, or wild animals, but games that involve the supernatural. Games like Tarot, Ouija, The Hosting Game, and countless others, were contacting spirits that have been around for centuries. These games have been causing supernatural infestations for years as well.

Despite warnings from those who have played them, and members of the clergy, people continue to play these games. In my audiobook, Evil Games That Should Not Be Played, you will learn the rules and hazards of some of the most dangerous occult games on earth. The game Charlie Charlie, has caused mass hysteria in a group of girls that played it. One Man Hide and Seek may be the creepiest game that I have ever researched, and countless haunting and satanic incidences can be traced back to the use of spirit, and/or Ouija boards.

Also, you will hear about herbs, charms, and talismans used to defend against evil spirits, and the cleansing ceremonies that can get rid of them.

I hope that you will listen to this audiobook about these games, but I strongly suggest that you play none of them. More than your life may be at risk if you do. You have been warned.

What listeners say about Evil Games That Should Not Be Played

Shall we play a game?

I think the thing that I like most about this book is that it tells you all the various games that delves into paranormal places, and then gives you instructions on just how to play them.Kind of making it like the hole a tooth leaves behind when it comes out. You kn ow you shouldn't put your tongue there, but you just can't help yourself. In fact, if I were an evil entity bound for human souls this is just the kind of book I would write. I'd tell you all the ways the rituals inside could grant your every wish, and all the horrible effects it would have on you and your loved ones, and then put every evil ritual I could think of inside. You know that no maater how great the warning, people would do tem anyway just to see if they were real. Hardy introduced me to a couple games that I had never heard of, such as the midnight man.

Clinger does a nice job detailing the games, and impresses you with the knowledge that these are not meant to be trifled with in the slightest. This is a fun informative guide to all those games that we played as kids (like Bloody Mary) but more up to date.

All I can say is have fun not playing.

This short book contains information on several evil games that should never be played and tells why they are so dangerous. I had not heard of several of these games. Bottom line is leave these games alone, don't tempt fate! There are a couple of chapters with remedies to help. I read this book using immersion reading, while listening to the audio book. The narrator was terrible, reciting sentences in rote.

Did not like the reader or the book! Would not listen to again. Not worth the time