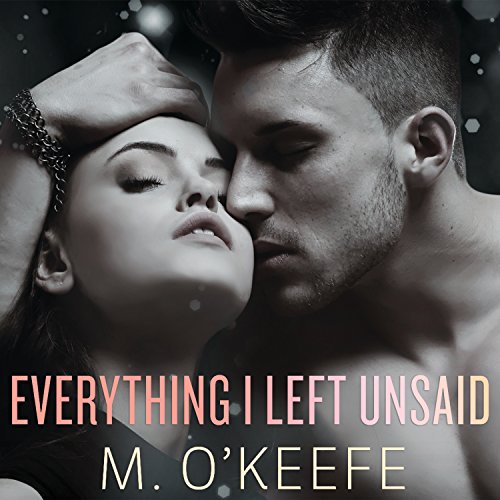 Everything I Left Unsaid

By: M. O'Keefe
Narrated by: Joe Arden,Maxine Mitchell
Try for $0.00

I didn't think answering someone else's cell phone would change my life. But the stranger with the low, deep voice on the other end of the line tempted me, awakened my body, set me on fire. He was looking for someone else. Instead he found me. And I found a hot, secret world where I felt alive for the first time.

His name was Dylan, and, strangely, he made me feel safe. Desired. Compelled. Every dark thing he asked me to do, I did. Without question. I longed to meet him, but we were both keeping secrets. And mine were dangerous. If I took the first step, if I got closer to Dylan - emotionally, physically - then I wouldn't be hiding anymore. I would be exposed, with nothing left to surrender but the truth. And my truth could hurt us both.

"Captivating characters and a cliffhanger ending will keep readers coming back for more." ( Publishers Weekly)

What listeners say about Everything I Left Unsaid

There was a lot of promise in the beginning, but by the end it was like pulling teeth. You can only say the same internal dialogue in so many combinations before the reader wants to throw the book across the room.

I was waiting for the story to pick up, but it just got worse. And the victim is simply running away from her problems the entire book. Because of my past I could relate to her situation, but how many times do we need to read about her inner fears without any real change? It got really old and left me feeling sick and angry that she couldn't get past her issues.

Oooh, here's a big shocker! The ending is yet another cliffhanger. Why do authors allow this to happen to their work? If you offer a series, then write a series of books with complete storylines.

Which character – as performed by Joe Arden and Maxine Mitchell – was your favorite?

Both Joe Arden and Maxine Mitchell did well in their performances.

The story could use a little less secrecy and a lot more character growth. The plot consists of experimental sexual growth with small highs of confused confidence because she feels the elation from trying something new in the sexual arena. She is simply trying to forget past experiences with sex. A long plotless story with little growth makes the story boring and irritating. The story begins with her as the victim and ends with her as a victim. What does that say?

Since the book was left on a cliffhanger, I really want to know what happens, but with the sick feeling I had at the end of the first book I'm not sure I want to read the second book.

Great plot and character development. Could not put it down. So glad I can roll right into the second book.

Very serious subject matter, but emotions so well written. Excellent character development and the brilliant narration fit the characters so perfectly. I'm getting the second book now, this does end in a cliffhanger. Definitely recommend if you're in the mood for an emotional story with a lot of depth.

So far, the story has been good. I feel like I need the next book before I can make a true judgement since this one ends one a cliffhanger.

Narration 5 stars
Two broken people who need each other but fight the pull. Liked the story but felt it moved too slow. Will likely continue as both books are part of the new romance package.