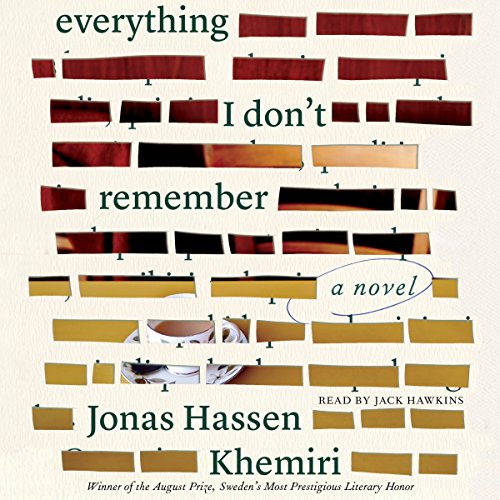 Everything I Don't Remember

By: Jonas Hassen Khemiri
Narrated by: Jack Hawkins
Try for $0.00

Winner of the August Prize, Sweden's Most Prestigious Literary Honor

One of Sweden's most celebrated young writers and activists spins an exhilarating, innovative, and gripping murder mystery reminiscent of the hit podcast Serial.

A young man named Samuel dies in a horrible car crash. Was it an accident, or was it suicide? To answer that question, an unnamed writer with an agenda of his own sets out to map Samuel's last day alive. Through conversations with friends, relatives, and neighbors, a portrait of Samuel emerges: the loving grandchild, the reluctant bureaucrat, the loyal friend, the contrived poseur. The young man who did everything for his girlfriend, Laide, and shared everything with his best friend, Vandad. Until he lost touch with them both.

By piecing together an exhilarating narrative puzzle, we follow Samuel from the first day he encounters the towering Vandad to when they become roommates. We meet Panther, Samuel's self-involved childhood friend whose move to Berlin indirectly cues the beginning of Samuel's search for the meaning of love - which in turn leads Samuel to Laide. Soon Samuel's relationship with Laide leads to a chasm in his friendship with Vandad, and it isn't long before the lines between loyalty and betrayal, protection and peril get blurred irrevocably.

Everything I Don't Remember is a gripping tale about love and memory. But it is also a story about a writer who, by filling out the contours of Samuel's story, is actually trying to grasp a truth about himself. In the end, what remains of all our fleeting memories? And what is hidden behind everything we don't remember? Told with Khemiri's characteristic stylistic ingenuity, this is an emotional roller-coaster ride of a book that challenges us to see ourselves - and our relationships to the closest people in our lives - in new and sometimes shocking ways.

What listeners say about Everything I Don't Remember

While it did take a little while to get used to the style of the writing, it was very intriguing and difficult to pull away from. If you get confused in the first few minutes, stick with it and it will sort it self out. Wonderful story, the narrator made this novel even better. Not only will I be anticipating other books by this author, but I will be looking into audiobooks read by this narrator. I am very particular about my audiobooks, and this did not disappoint!

The concept of this book has the potential to be very interesting but unfortunately it was written in a very muddled and confusing way. I feel that some might argue that it's a stylistic choice, but I feel like it's more so poor writing.