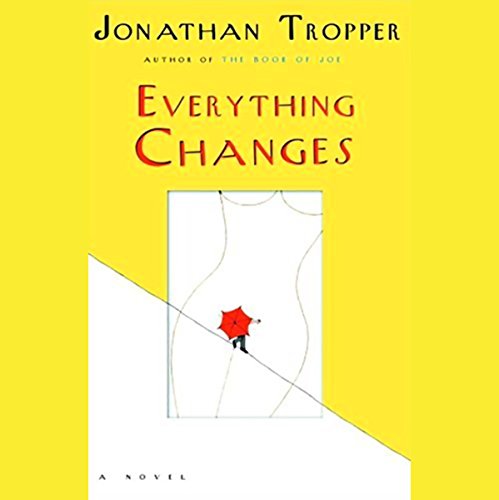 By: Jonathan Tropper
Narrated by: Scott Brick
Try for $0.00

Jonathan Tropper’s novel The Book of Joe dazzled critics and readers alike with its heartfelt blend of humor and pathos. Now Tropper brings all that - and more - to an irresistible new novel. In Everything Changes, Tropper delivers a touching, wickedly funny new tale about love, loss, and the perils of a well-planned life.

To all appearances, Zachary King is a man with luck on his side. A steady, well-paying job, a rent-free Manhattan apartment, and Hope, his stunning, blue-blooded fiancée: smart, sexy, and completely out of his league. But as the wedding day looms, Zack finds himself haunted by the memory of his best friend, Rael, killed in a car wreck two years earlier - and by his increasingly complicated feelings for Tamara, the beautiful widow Rael left behind.

Then Norm - Zack’s freewheeling, Viagra-popping father - resurfaces after a 20-year absence, looking to make amends. Norm’s overbearing, often outrageous efforts to reestablish ties with his sons infuriate Zack, and yet, despite 20 years of bad blood, he finds something compelling in his father’s maniacal determination to transform his own life.

Inspired by Norm, Zack boldly attempts to make some changes of his own, and the results are instantly calamitous. Soon fists are flying, his love life is a shambles, and his once carefully structured existence is spinning hopelessly out of control.

Charged with intelligence and razor sharp wit, Everything Changes is at once hilarious, moving, sexy, and wise - a work of transcendent storytelling from an exciting new talent.

"Pithy observations on love, marriage, and corporate life give the book a graceful charm. Tropper continues to display a fine feel for romantic comedy in this enjoyable follow-up to The Book of Joe." (Publishers Weekly)

What listeners say about Everything Changes

It Ain't Your Average Family

I loved this book.

Now for the bad part. While the protagonist's predicament moved me very much, there was a tendency on the part of the author to overwrite the melodrama. At times I wanted to scream, "Dude, enough is enough!" This is a dysfunctional family of major proportions and the reader can't help but feel Zack has contributed mightily to the tragic aura surrounding him.

Scott Brick, who I normally love as narrator, contributed to the high pitch insanity with his over-the-top vocal gymnastics. Still, this reader realizes the lump in my throat is warranted and Everything Changes firmly plants me in a world created by a gifted author.

After 2 Tropper books in 2 months, I'm ready for him to write some more stories! I love this book about essentially a "quarter-life crisis" and a man who can't seem to stop screwing things up once he gets started. I think we've all felt this way at some point or another and this book had me calling my mom and saying how I wasn't so messed up after all - compared to Zach, anyway. This book had me laughing out loud as I drove down the interstate and wishing I could stay in my car instead of going in to work. Easy listening and perfect for someone like me with a sarcastic streak the size of Texas.

Yes I would I really enjoyed this story from top to bottom.

What other book might you compare Everything Changes to and why?

One Hit Wonder both Story's are about a man finding this way through this sometimes shit storm called life.

Scott Brick is one of the best. It's like when jack nicholson played joker then heath ledger played joker after you saw Heath's performance you where like Jack who?

If you could rename Everything Changes, what would you call it?

Not Tropper's best, but still entertaining

Tropper's best, but still entertaining. Some really funny parts but some of the characters, and the core plot construction became a little tiring for me.

Loved the book - the reader not so much

i read and listened to this while on a plane. I found myself turning off the audio for a majority. I found Brick's voice annoying as he put on falsetto and fake NY accents. the narration turned me off and took away a lot of the novel. i would not listen to another book Brick narrarates

Tropper on a bad day

This is Tropper at his worst - which is still pretty good and definately better than most. It isn't the Book of Joe, but it is a comfort for those of us who have a wonderfully caustic sense of humor.

After I first started listening, I thought this was a guy-book (vs chick-book) because it had lots of references to guy noises and guy troubles. But I stayed with it and it turned out to be a good story so I would have to say I recommend it.

Love Johnathan Tropper and this one doesn't disappoint. At times it is laugh out loud funnymixed with the usualy poignancy of his other novels.

The writing was great. However the plot and character development are sorely lacking and I didn't take away much meaning at the end. The protagonist is a
narcissistic dithering coward and the book didn't make me laugh. Jonathon trooper is a fantastic writer but this book feels like it didn't have enough impact on me.

Much like the coming of age stories from my adolescence I found it easy to relate with the characters and understand how complex life in our 30s can be as we embark on the journey into "adultier" adulthood.