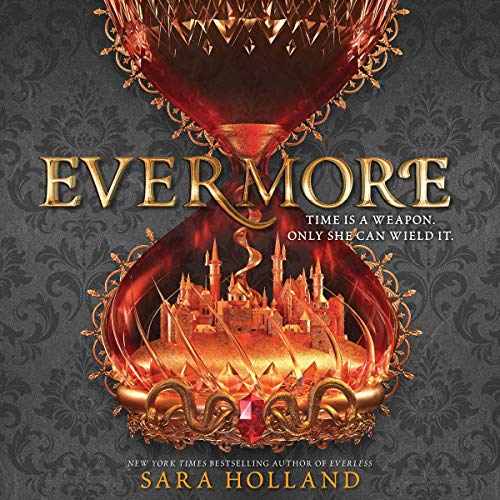 By: Sara Holland
Narrated by: Eileen Stevens
Try for $0.00

Jules Ember confronts the girl who is both her oldest friend and greatest enemy in the highly anticipated sequel to Everless, praised by New York Times best-selling author Stephanie Garber as “an intoxicating blend of blood, secrets, and haunting mythology”.

Jules Ember was raised hearing legends of the ancient magic of the wicked alchemist and the good sorceress. But she has just learned the truth: She is the alchemist, and Caro - a woman who single-handedly murdered the queen and Jules’ first love, Roan, in cold blood - is the sorceress.

The whole kingdom believes Jules is responsible for the murders, and a hefty bounty has been placed on her head. And Caro is intent on destroying Jules, who stole her heart 12 lifetimes ago. Now, Jules must piece together the stories of her past lives to save the person who has captured her heart in this one.

Perfect for fans of Victoria Aveyard, Kiera Cass, and Kendare Blake, Evermore is the high-stakes, star-crossed follow-up to the New York Times best-selling Everless for which fans have been waiting.

What listeners say about Evermore

i Neither liked it or hated it. The whole series was just kind of "meh".

I loved the first one. This one did not hold my attention as much.

The story is wonderfully written. Detail rich and colorful. Eileen Stevens really adds a special something. Her voice breathes more life into an already lively tale. She made me rise and fall and tremble and soar! You’ll love it! It’s a must listen!

At first I didn't get too interest in the beginning. but as the narrator keep going on and on with the story I knew I gotta finish it. It's bittersweet, but truly amazing!!

I have to say the story in and of itself was very good however I feel like the entire plot moved so slowly and when we reach the end of the story you find yourself wanting more. It’s definitely worth reading or listening to but the development of the story doesn’t shine a light to a book like glass throne.

Such a well written fantasy tale. Both a unique take on old time fairytales with an air of something entirely different running through. Enchanting, intriguing, and heart tugging. Definitely recommend this read.