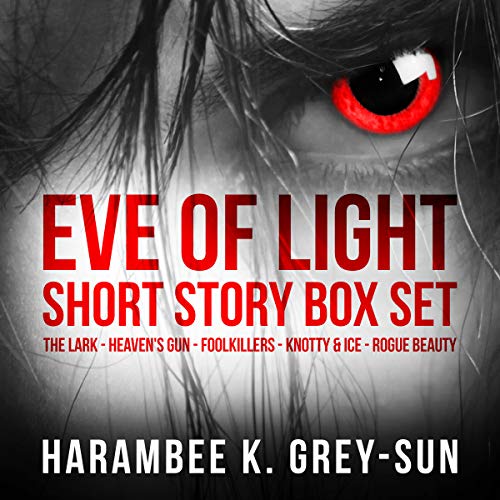 "The Lark": Danny is a struggling singer willing to do almost anything to get a little exposure and keep food on the table, so she doesn't think twice about traveling to the middle of nowhere to perform a gig. When she's stranded at an abandoned airport, however, she finds herself exposed to a sinister creature with a hunger for something only she can provide.

"Heaven's Gun": Jacob is a small-time criminal who dabbles in everything from drugs to prostitutes to illegal weapons. When he finds a gun that seems to be of supernatural origin, he begins to dream of the big time. His dream turns into a nightmare when he realizes someone wants their toy back.

"Foolkillers": When lonely middle-manager Avery Brocus set up a profile on an adult hookup site, he never dreamed a young hottie would contact him, let alone insist on meeting in person. Agreeing too quickly, he expects to be robbed of his money or identity. He soon realizes he’s been caught up in a plot for something far more valuable.

"Knotty & Ice": Even though he’s one of the Heartland Security Agency’s Peacemaker agents, a man sworn to help protect and preserve the morality of the US, Neal can’t give up his habit of patronizing prostitutes. When one of them steals the prototype of a top-secret device, however, he has no choice but to come clean in order to rally fellow agents for a recovery mission. His situation goes from bad to worse when he is tricked into a plot to take down one of the Agency’s most powerful secret allies - an angel from Heaven&Hell.

"Rogue Beauty": A fugitive from the Sprytes, one of the most dangerous supernatural cults on Earth, Betty has refashioned herself as a revealer of dark conspiracies and a killer of misogynous conspirators. On her crusade, she has successfully stayed off the radar for months. When the Sprytes close in, however, Betty may find herself entangled in a conspiracy too dark to escape.

enjoyed the style of the author and narrators where perfect. A must have if you enjoy dark short stories