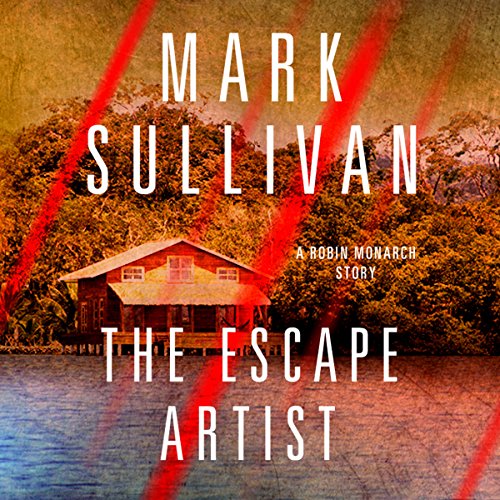 Mark Sullivan, the co-author of James Patterson’s Private Games, has, in Robin Monarch, created a compelling new hero. Monarch is a world-class thief and a highly skilled operative - a man with skills, a rigid code of honor, powerful friends and implacable enemies.

In Escape Artist, Monarch’s abilities - and his nerve - are both tested when he takes on an impossible mission to stop an assassination plot that’s about to unfold, when all anyone knows for certain is the target. To save the diplomat who is in the crosshairs, Monarch must arranged to be locked up in a foreign prison, so that he can get close enough to the one person who knows the details of the assassin's plans. Then, once he learns those details, Monarch must escape from that high security prison in time to thwart the killer.

Robin Monarch - called “one of the most compelling heroes since Jason Bourne” (Lisa Gardner) - is introduced in this chilling, nerve-wracking story. Presented with a special excerpt from Rogue, the first Robin Monarch novel, coming in Fall of 2012.

"A compelling, page-turning blend of spy and caper fiction: it's Robin Hood for the twenty-first century.” (Jeff Abbott)

What listeners say about Escape Artist

OK, but not well written or narrated.

This 2 hour novella best serves as Mark Sullivan's introduction to both the teenage Robin Monarch and Robin Monarch the CIA agent. At that it is effective especially as it shows the beginning of Monarchs late teen move from pure street crime in Argentina to beginning to turn his life around.

On the negative side the interweaving of the two stories with constant changes from one to the other can distract the listener especially when using the same narrator for both. As a fan of both the author and the narrator I find this and the other two Robin Monarch novellas disappointing. Yet as an introduction to the Robin Monarch series the novellas are worthwhile.

Always like Robin Monarch and the slick way he accomplishes his missions! Always very entertaining.

Read my review of Brotherhood. DITTO it. These are excellent stories packed with a solid, fast moving and interesting story lines.

Would you listen to Escape Artist again? Why?

Yes, because of the intensity.

Robin Monarch because he show his weakness and strength.

Jeff Gurner is excellent and brings the characters to lilfe

Where does Escape Artist rank among all the audiobooks you’ve listened to so far?

This was my first audio book

What other book might you compare Escape Artist to and why?

Have you listened to any of Jeff Gurner’s other performances before? How does this one compare?

This was a first and he did a great job

I love audio books now and recommend them to everybody. Perfect for flying and just chilling at the beach in the sun

This was a nice introduction to the Robin Monarch character. Caught my interest enough to get the novel Rogue.