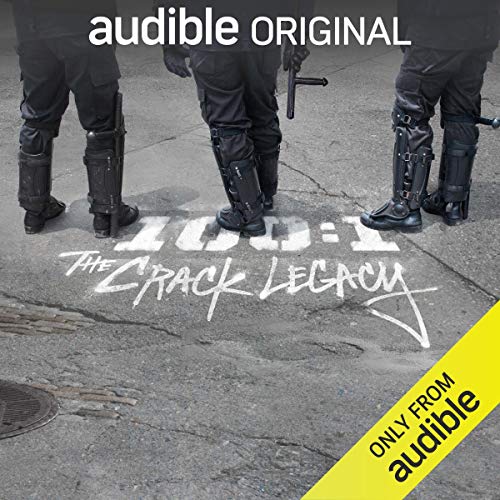 [Contains explicit content] The series begins with the deaths of two young black men. First, Freddie Gray, who died after police arrested him and threw him into the back of a police van in Baltimore. Then, Len Bias: the rising college basketball player. His cocaine overdose in 1986 helped ignite a new, more aggressive phase of the War On Drugs, one that zeroed in on crack cocaine and black communities. This episode looks at the ties between the two deaths, and how the draconian, anti-crack drug laws of the mid-80s, set policing in America on the course of lethal aggression against black Americans we’re still witnessing today.
©2016 Audible Originals, LLC (P)2016 Audible Originals, LLC

This is biased, lazy reporting. Maybe if I got a journalism degree I could write stuff about how every bad choice I ever made was untimely some other boogeyman’s fault? Where is the self responsibility?

A very shallow investigation into a complex subject. Apologises too much for drug dealers actions

a good series, very well presented and tells the hard truth from both sides of the argument !

Excellent and timely analysis of a major crisis

Do you think it's fair for a minor possession charge to lead to life in prison for an 18 year old?

Christopher Johnson's investigative journalism is lively and engaging, and involves a strong amount of both research and personal accounts. Johnson tracks the destruction wrought not only by the 'crack epidemic' itself but by the draconian policies brought into place to supposedly deal with the scourge. The War On Drugs is portrayed as a failed project, cynically designed to make heroes of politicians with zero thought for the actual lives that would be impacted-- generations of (largely) African American men imprisoned for life.

I massively enjoyed the production, the narration, the interviews and the well-shaped argument. I found it extremely compelling, and look forward to Johnson's next project.