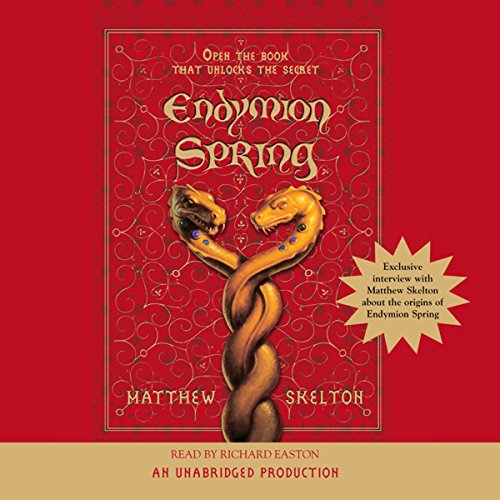 By: Matthew Skelton
Narrated by: Richard Easton
Try for $0.00

"You've stumbled onto something much larger than you can possibly imagine."

In the dead of night, a cloaked figure drags a heavy box through snow-covered streets. The chest, covered in images of mythical beasts, can be opened only when the fangs of its serpent's-head clasp taste blood.

Centuries later, in an Oxford library, a boy touches a strange book and feels something pierce his finger. The volume is blank, wordless, but fine veins run through its pages, and they seem to quiver, as if alive. Words begin to appear in the book, words only the boy can see.

So unfolds a timeless secret.

"[Endymion Spring] may give Dan Brown's Da Vinci Code a run for its money....It is unputdownable." (The Irish Independent)

What listeners say about Endymion Spring

I loved this book. It could easily be made into a movie. I emailed Matthew Skeleton and got a response. He is working on another book from 18th century London. He don't know when he will write another book with Blake, Duck, and Oxford. I hope he does I really liked the characters.

Could have been good...

I thought the story dragged a lot. The characters seem to wander around aimless. It seemed dark with no purpose and the ending didn't seem to make much sense.
I was disappointed with this book.

This is one of those books that fires the imagination and makes reading one of the unparralled joys of living. I do hope Mr. Skelton does not take another 10 years to tell us more about Endymion Spring and the keepers.

This is the first audio book I have ever listened to, and the narration is very engaging. The story goes back and forth between the two main characters, though others might have difficulty, it is a style I am used to reading. The story is grounded with a historical figure and time, Gutenberg and his consideration of printing the Bible. The rest is pure, fanciful fiction about two boys and their encounter with an enigmatic book and the people who would do anything to possess it. The ending fell a little short for me, but the narration made the entire listen worthwhile.

this is a fun creative story. Magical in a way. it kind of reminds me of The Great Gatsby meets an Oxford Library. But the narration ruins it for me. it's just over-told, over-narrated, and said with too much emotional expression. The words themselves have a great deal of expression which makes the narration seem overcooked.

I liked this book and the story is engaging, however it seems like it is geared to the younger listner as the main characters are children.