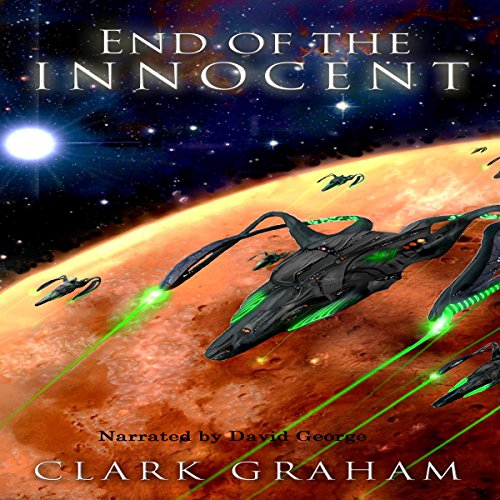 End of the Innocent

By: Clark Graham
Narrated by: David George
Try for $0.00

The music on the radio suddenly stopped. The announcer came on. "We are bringing you breaking news. Large flying ships have come from behind the moon, out of the sky, and are dislodging black clad warriors who are attacking...."

The invasion had begun. A backward society found itself at war against an advanced, space-traveling race. The fighting would envelop the whole society tearing nations and families apart.

Pethran and his two sons struggle with a new reality not of their making. One son fights the aliens, the other is captured and forced into the galactic navy. The father struggles to carry life on without them. This is truly the end of the innocent.

What listeners say about End of the Innocent

The story is reminiscent of the Roman empire. The empire spans the galaxy The emperor is on his deathbed there is no clear heir. Now in the outer reaches the empire has invaded yet another planet. This time they run up against a very stubborn group. Epic battle is in ground, epic space battles and all told from a gritty front row view. Very well written and well narrated.

Two great themes (lost of innocence) and (coming of age) meet sci-fi. Great performance with character voicings. The story plot keep me wondering what would happen to the characters.

What an outstanding book!!!

Yes this book was great, The whole concept of the book was perfect Sci-Fi and loved every bit of it.

Each family character was great, telling the story, making you understand that as much as you want to resist it might be better to comply at least a little.

No Favorite scene this whole book was great I am looking for it to be a great series and I'm a fan for sure.

Early in the book one of the main character dies, I feel for the family and since I have lost a loved one I could imagine the pain the others feel during this time.

Good Attempt at a Space Opera

Good first story in the Galactic War Series. Most of the story revolves around a family dealing with the invasion of an alien species.

Many of the people in the story have euphemisms of English speakers. I wish the author did more world building around the different cultures, instead of giving the different aliens the culture of humans from different eras.

With very interesting world (and Empire) building, this short novel could have been the start of a great series. Instead, it is the story of how one family is changed by the invasion of a galactic empire. This novel has some well drawn characters, many good and bad guys, lots of action, and a depth of thought for such a short novel. I hope Graham writes more novels set in this universe. Finally, I thought David George did an excellent job differentiating the many characters in this story

A must for Space Opera fans

First to get it out of the way, "I was given this free review copy audiobook at my request and have voluntarily left this review."
That being said, this is a great shorter space opera that made my commute to and from work something to look forward to.
If you like Eric Frank Russel or other authors of that era then this story is for you.
End of the Innocent is a story that could easily fit into Analog Magazine of the 1960's.
David George as the narrator is a perfect fit to this story.

Felt like listening to an old time radio show

The End of The Innocent was interesting in that it started out like listening to an old time radio show or broadcast. I don't think this was intentional. The facts of the case of an alien invasion were laid out and the coverage continued throughout the war and peacetime. There is a story in there about a family who is torn apart and then reunited through the war. The story takes place over a very long time and focuses a lot of the exposition on how things are, both on world and off, in the great galactic empire.
As the story moves forward, the personal story of the family begins to take the forefront of the narrative and it becomes more personal.
All this said, it is worth a listen. the story itself is good and creative. the lives lived throughout the story are interesting and you find yourself wanting to know what is going to happen to this family. it pulls you in.

I received a free copy of this audiobook and have left a voluntary review.

Well organized with understandable series of events.
"I was given this free review copy audiobook at my request and have voluntarily left this review."

Can be recommended for teen reading

The story seems clipped and superficial in a lot of places.


&quot;This book was provided at no cost for review.&quot;