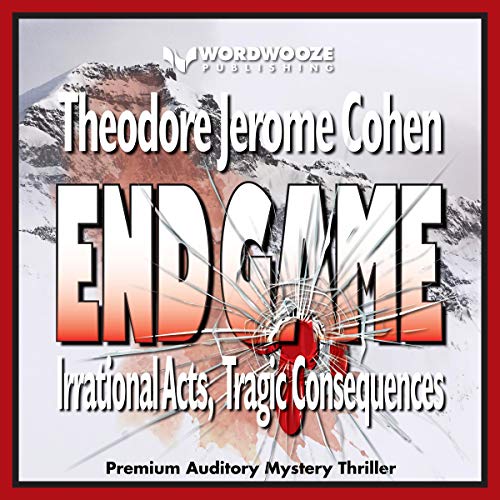 "It is the juxtaposition of factual and imaginary detail, real and fictitious characters, each underscored by footnotes or website research, that gives Theodore Cohen's work a signature style [that is] quite unique, enjoyable and thoroughly ingenious." (Gary Sorkin for Pacific Book Review)

End Game: Irrational Acts, Tragic Consequences is book III of the Antarctic Murders Trilogy. In many ways, it brings to an end three things: the sagas of Captain Roberto Muñoz of the Lientur; the hunt for the millions of dollars in US and British cash, negotiable securities, gold coins, and jewelry stolen from the Banco Central de Chile following the Chilean Earthquake of May, 1960; and the murders that followed the robbery.

Book I: Frozen in Time: Murder at the Bottom of the World, introduced American scientists Ted Stone and Grant Morris, who, while performing geological and geophysical field work with the assistance of Captain Roberto Muoz of the Chilean auxiliary tug Lientur, were caught up in the hunt for the robbers and the spoils from the robbery and murder.

Unfinished Business: Pursuit of an Antarctic Killer introduced Captain Mateo Valderas and Lieutenant-Commander Antonio Del Ro of the Chilean Navy's Office of Internal Affairs. Initially assigned to solve a murder in Africa, they soon found themselves facing perhaps the most vicious, cunning thief and murderer they ever encountered.

The return of American scientists Ted Stone and Grant Morris to Santiago for the purpose of helping personnel of the University of Chile prepare for the 20th Chilean Expedition to the Antarctic, beginning in December 1965, jeopardizes the lives of both scientists. What irrational acts will elicit the tragic consequences that finally bring everything to an end? For the answer, listen to book III: End Game: Irrational Acts, Tragic Consequences.

The Conclusion of this Trilogy based on Facts!!

The author did a great job with this story and taking a Real Investigation and doing a great account of what happened. This is a Wonderfully written story and more people should take advantage and read/listen to it.
Though based on facts this is written as a Fictional story.

What a wonderful ride this has been on this 3-book series.
I loved the storyline. Each book got Better and better. By the end of this story I was literally on the edge of my seat praying the author wasn’t going to leave me hanging. The narration was amazing!!
The language was a bit hard to hard understand at times because his accent was so good, but it didn’t stop me from really enjoying this book.
I recommend this series.