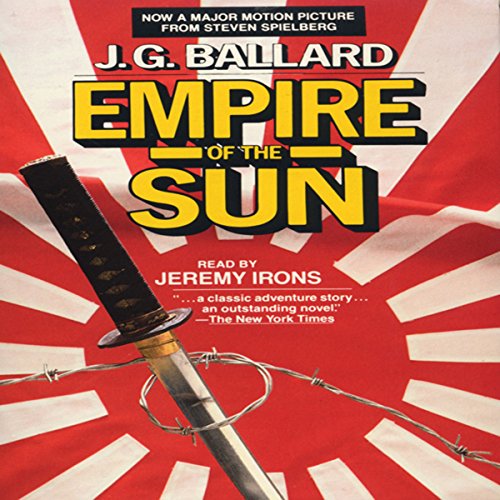 Empire of the Sun

Jim is separated from his parents in a world at war. To survive, he must find a strength greater than all the events that surround him.

Shanghai, 1941 -- a city aflame from the fateful torch of Pearl Harbor. In streets full of chaos and corpses, a young British boy searches in vain for his parents. Imprisoned in a Japanese concentration camp, he is witness to the fierce white flash of Nagasaki, as the bomb bellows the end of the war...and the dawn of a blighted world.

Ballard's enduring novel of war and deprivation, internment camps and death marches, and starvation and survival is an honest coming-of-age tale set in a world thrown utterly out of joint.

What listeners say about Empire of the Sun

Abridged version kind of ruins it.

I love this book and found the abridged version sort of disappointing. I wish there was an unabridged one. The narration by Jeremy Irons is great though. Consequently I would recommended reading the book rather that listening to abridged version. I added it to my library because it was inexpensive and I had a $10 credit. Wish I had not.

empire of the sun

Only giving it 4/5 because it's abridged. Why do they do this?
This is one that you will listen to a couple of times. Well done.

Wish it was unabridged

I wouldn't recommend any abridged book to a friend, that's just not nice.

There were a lot of them I liked, they were just too short.

Do you think Empire of the Sun needs a follow-up book? Why or why not?

No, but the unabridged version would be nice.

I like the story a lot, just not the abridged version. You might as well just watch the movie. It has young batman in it.

Jeremy Irons is the best, but it was tough keeping up with the abridge jumps

I will admit, I bought this book just because Jeremy Irons was narrating. He doesn't disappoint, but as well as being treated to hours of Jeremy Irons I found a fantastic little story about how war looks through the eyes of a child. It's an incredible look into how adaptable children are, and how quickly something that would leave an adult quaking can become just another every day thing. It's scary, but leaves you with a lot to think about.

A stunning and important book, this audio version is brutally hacked up and abridged. Jeremy Irons does an excellent job of narration, but that doesn't make up for the loss of Ballard's writing or large gaps in the story.

I enjoyed it but it is abridged

I enjoyed it but it is abridged. It feels like things have been left out. Jeremy Irons reading is masterful.

This is a great book and Jeremy Irons gives a great performance. I was disappointed however to find that it is abridged, which was not evident in the description.

The one audible book to have

If you're gonna buy one audible book to immerse yourself in, this is it. Jeremy Irons reads this book like no other bringing the characters and story telling to life as vividly as it was lived. I had to listen to the last part of the the book over and over again. I lack the words to praise this audio book appropriately so I will use this cliches. It is hauntingly beautiful.

There is no doubt that Jeremy Irons is a great actor. However, his delivery of this material is uniformly quiet, flat, almost inflectionless. This bothered me for much of the book until I decided this must be a choice to reflect Jim’s unflappable acceptance of all that was happening to him. Unfortunately, the sound quality of this recording is poor as well. All of this leaves me a bit undecided about this recording.