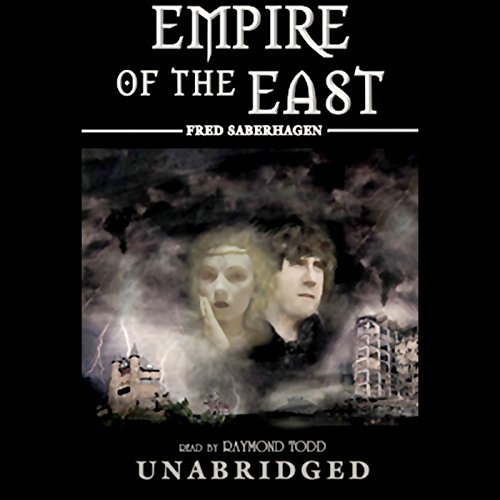 Empire of the East

By: Fred Saberhagen
Narrated by: Raymond Todd
Try for $0.00

In the distant future, society has crumbled. Dark forces now rule the land, keeping all humans under their oppressive thumbs.

In the darkness of the shadows and whispered on the winds, there is talk of rebellion. In the swamps, a small band has formed. Determined to regain their freedom, the rebels, heavily outnumbered, plan to overthrow an army of thousands, with the help of one incredible weapon.

It is only a legend, a story left over from the Old World before magic and the wizards came to the land. A weapon of technology. It is the mystical Elephant, and whoever masters it holds the key to freedom...or defeat.

One young man, determined to avenge the death of his family, sets out to join the rebellion and find Elephant. What he discovers will change everything.

What listeners say about Empire of the East

First, I'm a Saberhagen fan, so I lived the book when I read it and as I listened to it. Todd's narration is, as always, barely tolerable. The frequent mispronunciation is very distracting. I won't buy anything he narrates again.

BUT, then I started over while I had no other books to listen to, and THEN got hooked... couldn't put down the MP3 player after that until it was done.

Don't let the first part put you off, the plot thickens and the characters get fleshed out... I'll probably go ahead with the other books in the series now...

I ALMOST quit, glad I didn't!

Overall I did like this book and would recommend it but you have to be patient. It gets off to kind of a slow start and to make things worse the reader is well.. kind of annoying. I could ignore the long pauses but the constant loud inhaling is VERY distracting. Could they not edit that out.
...INHALE CATCH MY BREATH,,,,,LET IT OUT... KEEP READING...

This book is the psuedo prequel to "The Swords" and "Lost Swords" novels by Saberhagen. Stand alone this is a very good novel and closer to what many expect from him. Taken as the prequel to the Swords novels, this is a must read and great set up for one of the best fantasy series ever written.

I don't know if the story is good or not - the narrator ruins the story. I think I would actually have to read it myself to truly know.
The story seems discordant, but the narrator reads it in such a choppy manner that I can't be sure. It's hard to listen and it easy to be distracted by other things going on around me so that I miss key points in the story and have to go back and listen again - argggggg.
The narrator also seems to lack the basic ability to follow the writers grammar clues, completely skipping over intentional pauses marked by commas and then completely distorting the sentences. He does this through the entire book.
So don't waste your credit or $ on this one, check it out from you local library if you are truly interested.

I looked forward to listening to this book. I had known about Fred Saberhagen for sometime as I have been "into" SF for many years, but just hadn't gotten around to any of his material. Well... I just couldn't get into this story. I quit in the middle of part 3. I did not care about characters, the plot was not unique. It was like he told himself he needed to write a book that had some typical sci fi/fantasy riffs, complete with the usual suspects. . I just can't recommend this book. I did not care for the plot or characters. It did not have any heart. There are too many good ones out there don’t waste your time.

This is the best book I have listened to yet from audible.com. It was like 3 books in one. The plot elements were interesting, the tension was sincere, the characters were likable and the world was fascinating. I highly recommend this book!

An awful book! It was painful to listen to, although other reviews said that it got better towards the end. Weak character development. Characters had no personality. This book was like a trilogy crammed into one abridged book. A descent plot that goes nowhere. Its just bad

Better than the sum of its parts

I'm surprised to find that by the end of this trilogy, I am quite fond of the tale that was told. more so than while listening to it. As other reviews note this old style fantasy story has minimal character development and the good and bad guys are pretty single-dimensional (aside from Chup) but the world that is eventually spun out is an interesting one. I read The Swords and The Lost Swords books as a young kid and have prefaced a reread with this and I'm glad I have.

I quite liked the first book, The Broken Lands, which looks like it puts me in the minority among the reviews. It is focused almost entirely on the good guys but the mystery of forgotten technology, which is the main plot element, drew me in and played out well.

The second book, The Black Mountains, was my least favorite of the three. It pays more attention, than the first book anyway, on the bad guys who are no more compelling than the good guys, imo. The Beast Lord and how he works is interesting and Chup, a recurring character who I am not the most interested in, is a primary focus.

The last book, Ardneh's World, is the epic finally. Each of the books prior had escalated the scope of the battle between good and evil, the first being the resistance against a local lord, the second a similar trial versus the regional overseer, and the last finds the force of the empire vs the full army of the resistance. Though the major conflict involved even larger single entities and there is no large scale battle scene in the book. Primarily the last book explains the orders of the world, through straight exposition from one character, and whole that's not exactly the most creative way to do it, by now it feels very in tube with Saberhagen's literary style and, again, the idea being explained is good enough to make it enjoyable.

Overall, the characters are flat but the world is interesting. Glad I read it.

Fred Saberhagen is a master storyteller. Characters, plots, complex world building, all make for a rich story. This audible version is done with world class talent. I recommend this for any lover of fantasy or science fiction.

Re-read this book after many years. Better than the first time. Loved it. Narrator was expressive and enjoyable. However accenting all the speech was maybe not a good idea.

An average fantasy tale spoiled by an unaccountably poor narrator. If you like all your characters to sound like a drunken Swedish speak-and-spell then this is the audiobook for you. If not, maybe consider the hard copy.