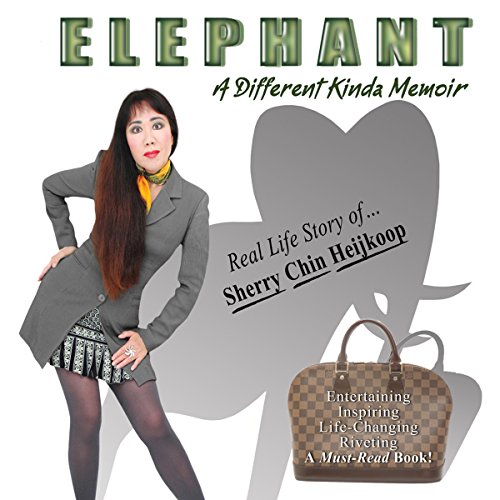 By: Sherry Chin Heijkoop
Narrated by: Jeremy Lynn
Try for $0.00

Sherry Chin Heijkoop's different kind of memoir, Elephant, is an inspirational and entertaining read. Elephant unfolds her life growing up in extreme poverty in a dirt shack in Malaysia after her dad womanized his way out of her family when she was two. Raised by a single mom with eight siblings - a family that consistently degraded Sherry for not having the physical traits of a "Chinese beauty" and in turn labeling her with the nickname "Elephant". See Sherry's struggle out of abject poverty with determination, fearlessness and a fiery ambition to work around the world to selflessly elevate her family from destitution.

With this unmatched drive for success, Sherry became a top closer and producer in Asia, Europe, and America. Despite insurmountable obstacles, deep betrayals, and the burden of supporting her large family, she stayed focused on her goals, worked very hard to achieve consistent success, became a millionaire, and retired young. Her biggest personal challenge came after retirement.

Out of kindness and compassion, she adopted a homeless college student in Southern California as her son and she surprisingly felt a family love she never realized she hadn't had. However the story doesn't end there: Just when Sherry thinks her life's challenges have met their peak long before, she unsuspectingly learns a valuable lesson.

If you think you've been knocked down and can't get up, then read Elephant. It is an extremely uplifting, inspiring, unique, entertaining and fascinating story!

What listeners say about Elephant