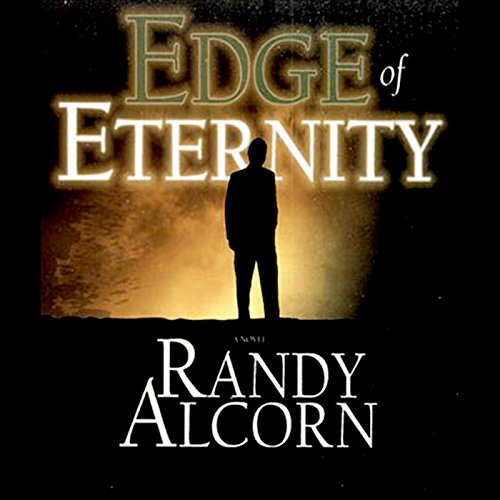 By: Randy Alcorn
Narrated by: Roger Marsh,Phil Ross
Try for $0.00

Nick Seagrave is a disillusioned business executive who has lost loved ones to tragedy and his family to neglect. Now, at a point of great crisis, he finds himself inexplicably transported to what appears to be another world. Suddenly he's confronted with profoundly clear views of his own past and personality. And he's enabled to see, hear, taste, and smell the realities of both heaven and hell - realities that force him to face dangers and trials far greater than any he's known before.

Pitted against flying beasts; a monstrous web that threatens to hold him captive; an evil, brooding intelligence; and undeniable evidence of a spiritual world, Nick must finally come to grips with the God he claims not to believe in.

Walking between two worlds - where every choice he makes casts a vote for heaven or hell - Nick Seagrave prepares to make decisions that will change his life forever, as he stands on the Edge of Eternity.

What listeners say about Edge of Eternity

All I can say is, "Wow" - This book is incredibly insightful into the Christian life and understanding of what Christ has done for us and the purpose for our lives. SO creative - definitely had to come from direct revelation from the Holy Spirit. I listened with my 13 year old son on a long road trip and just continually sat there amazed at how it was packed with creative ways to express things. So many aspects of the Christian walk were brought out and the way you come to know what Christ did for us totally blew me away. What a great way to understand it. Being a creative person and thinker I'm not usually surprised by new ways to explain things creatively, but I sat intriged with it all. Everything included in the story was meaninful and served a purpose for understanding our "walk" better. My son really got into it as well. The battle scenes were so well done and described; the warrior in him was sparked. I will definitely look into more of this author's books and I want to get a copy for lots of people. I think it's something I will listen to again and again to refresh and refocus me. One thing though, the narrator spoke pretty fast for a audiobook, though it kind of matched the story. I had to get used to that. Compared to others it was on fast speed.

Good once you get into it

I would say it was time well spent after the first hour or so. Very difficult to get into it, which is not normal for his books.

The voices were very dull

You can tell it is abridged, too short.

I would like to read the whole unabridged book. There seem to be loose ends never fully developed which makes me feel I will never be satisfied with it till I buy the print version.

I think the whole book is quite interesting. Randy Alcorn is a good writer.

What aspect of Roger Marsh and Phil Ross ’s performance would you have changed?

The part I would like to change is to have a woman's character have a female voice. It is a bit confusing to hear a male voice doing the female parts.

Was Edge of Eternity worth the listening time?

I think it was, but it makes me think of the fact that for the book credit I could have gotten a longer book then 4 hours and instead gotten Safely Home or another longer book.

From now on I think I will try to find unabridged versions.

What the heak is that flapping?!?

I could not get past the audible sound effects and abandonded the story... I rated the story avarage since the audio was what made me turn it off.

Every one of Randy Alcorn's books have brought me to a deeper understanding of truth.

The way that the book was abridged made it choppy and hard to follow. Thanks

I'm not, by any stretch of the imagination, a reader. So to find this on audible and have it so wonderfully performed, was amazing.

Would you consider the audio edition of Edge of Eternity to be better than the print version?

What was one of the most memorable moments of Edge of Eternity?

When Nick could see Joshua for who he really was

Which character – as performed by Roger Marsh and Phil Ross – was your favorite?

The title, it says it all

I recommend this to everyone. It's enlightening and gives such a parallel view to our lives and reality of Whom we belong to...not ourselves...

I love the perspective

This book has my attention, all the way through! I loved this perspective. It was a fictional that made me look inward at my own life choices. Very impressed.

Strange At First But Then Amazing

Initially, I really didn’t like the book, but as I kept going it got better and better. I just finished he book and I will immediately reread it. I highly recommend it.